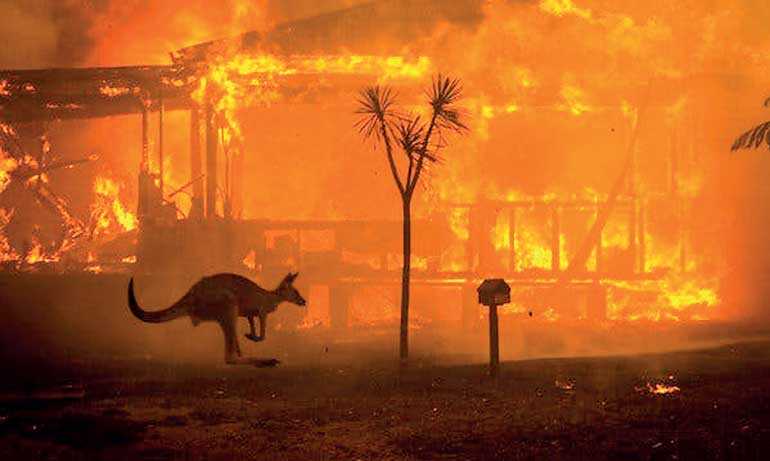 As we entered the new decade 2020, Australian bush fires were burning relentlessly causing enormous damage to property, loss of human lives and death of millions of animals

Many consider nature to be rather benign, it is there and so what. But over the years, and especially in the last decade many started to think about the way the nature is changing, not for the better. Scientists have been focusing on this for a long time and the emission of CO2 gas from fossil fuel burn and the

accumulation of it in increasing amounts causing the earth to heat up due to heat not getting released from atmosphere.

Thus over the years there have been UN sponsored global conferences and decisions being taken to reduce the emission of greenhouse gases. The Union of Concerned Scientists in an article published on 16 July 2004 and updated on 24 May 2018 states: “The primary cause of global warming is human activity that releases carbon into the atmosphere, most significantly the burning of fossil fuels to drive cars, generate electricity, and operate our homes and businesses.

“Tropical deforestation, also by human hands, is another major contributor. When these forests are burned, they release huge amounts of carbon into the atmosphere and in addition, because the forests no longer exist, they are no longer available to absorb CO2.” (See https://www.ucsusa.org/resources/global-warming-faq.)

As we entered the new decade 2020, Australian bush fires were burning relentlessly causing enormous damage to property, loss of human lives and death of millions of animals. Elsewhere there were many earthquakes in this month of January alone, most recent being one in Puerto Rico on 6 January, of 5.8 magnitude. Then another earthquake of 6.4 magnitude struck Puerto Rico on 08 January.

Then there are other disasters caused by nature. As per report from cnn.com dated 6 January, 66 people have been killed by the floods in Jakarta, and tens of thousands have been forced to flee the capital Jakarta. https://edition.cnn.com/2020/01/06/asia/jakarta-floods-intl-hnk/index.html.

The Buddha, the Enlightened One said, that the human consciousness of the ordinary humans who have not attained Arahanth stage is illustrated with the four great elements of Patavi or earth element, Apo or water element, Thejo or fire element and Wayo or air element.

Irrespective of how many elements are there in the Periodic Table beginning with Hydrogen and ending with the 103rd element Lawrencium, the four great elements are the basis for the illustration of Nama and Rupa or Name and Form Perception in our consciousness. These illustrations of name and form perceptions leads to formation of mind, and negative illustrations resulting negative minds of hatred, craving and delusion.

Only those who even may not have enlightened but are on the path to enlightenment will have positive illustrations of compassion, loving-kindness, altruistic joy, equanimity, mindfulness, gratitude etc. Such people will develop minds of love and compassion towards fellow humans and other species and in general the environment as well.

That means, even though we think there is solid matter and where to the naked eye of humans it is seen as if it never changes, there is in reality enormous change of extremely high frequency.

The force that can impact the normal frequency of change in a negative way is hatred.

Dr. Masaru Emoto, the Japanese scientist who revolutionised the idea that our thoughts and intentions impact the physical realm, is one of the most important water researchers the world has known. For over 20 years until he passed away in 2014, he studied the scientific evidence of how the molecular structure in water transforms when it is exposed to human words, thoughts, sounds and intentions.

The extraordinary life work of Dr. Emoto is documented in the New York Times Bestseller, ’The Hidden Messages in Water’. In his book, Dr. Emoto demonstrates how water exposed to loving, benevolent, and compassionate human intention results in aesthetically pleasing physical molecular formations in the water while water exposed to fearful and discordant human intentions results in disconnected, disfigured, and “unpleasant” physical molecular formations. He did this through Magnetic Resonance Analysis technology and high speed photographs. (See https://thewellnessenterprise.com/emoto/)

The commodity that is emitted in huge quantities to the atmosphere today is Hatred. It is evident everywhere in great majority of nations with protests, wars, and hate generating activities. What is happening with the Great Elements of air, water, fire and earth can be more due to the impact of hatred on them, more than whatever impact the CO2 emissions may have. Also, late last year there were mass protests where millions were demanding change, anxious about future and angry about the failure of leaders to arrest the crisis of global warming.

Each day the situation in human behaviour is getting worse and it has now been further aggravated by the drone attack by US forces killing the Iranian General Qasem Soleimani near the Bagdad Airport.

Could tension between the US and Iran spark World War 3?

Hillary Mann Leverett, a former senior US National Security Council official, told me on Al Jazeera this past week that in Iran the United States faces its greatest adversary since World War II.

She’s ignoring the nuclear-armed Soviet Union of the Cold War and the current threat of China. But look more closely and she has a point.

Iran has a large military, a nuclear program, it is geographically crucial to the Middle East, it borders the Strait of Hormuz — one of the world’s most crucial choke points — and it is resource rich.

Iran is the world’s most dominant Shia Muslim power. Since seizing power in the 1979 revolution, Iran’s clerical regime has withstood war, revolt and crippling economic sanctions.

Iran would not capitulate as quickly as Saddam’s Iraq or Gaddafi’s Libya. Anyway, its leaders are too shrewd to invite an Iraq-style US invasion with American troops rolling down the streets of Tehran.

That’s not something that would appeal to America either.

Then Iran retaliated with missile attacks on US troop locations in Iraq.

The immense increase in hatred due to these actions is soon bound to have an extremely negative impact on the four great elements. Of the four elements, earth element had few reactions in the form of earthquakes of lesser magnitude, but could well erupt causing immense destruction. The crash of the Ukrainian Airlines soon after takeoff from Tehran Airport killing all passengers and crew is now seen by many countries as a missile attack. The hatred that is emanating from human minds due to this is enormous and increasing daily.

Three of the Four Great Elements, water, fire and air have been dealing heavy blows on this planet and humans and animal population for many years. Earth Element has not done damage as with other three so far. What is left now as I see is the possibility impact of earth element, and the aberration in behaviour of Tectonic Plates. San Andreas Fault is the tectonic boundary between the Pacific Plate and the North Atlantic Plate. Parts of San Andrea Fault have not erupted for over 200 years, and the impact of the increasing hatred of humans towards humans can cause it to erupt. If such a thing happens, these is no military force in planet earth that can conquer it. It could also be other tectonic plates that may be impacted negatively by the increasing hatred.

Unless we humans learn to live and let live, such cataclysmic events could take place even this year. The solution is to learn that all humans want to live, and that no one has a right to take away the life of another human. Humans also must know that no one will live for 5,000 or 10,000 years, but at most 70 to 80 years. Why are we not able to accept the fundamental reality that we all belong to the same species of Homo Sapiens?

As per available information, approximately 32 million sheep and eight million cattle are killed each year for meat. (See https://www.animalsaustralia.org/features/ritual_slaughter.php)

It is also noted that in order to restrict drinking of too much water by Camel, more than 10,000 Camels will be shot by professional firearm experts. (See https://www.hindustantimes.com/world-news/australia-to-kill-up-to-10-000-camels-as-they-drink-too-much-water-amid-wildfires-report/story-1sqbZtrBEsL8fSUg88bZRK.html)

These animals too know fear, and the negative vibrations they will emit will also impact the four great elements.

If the world leaders and the UN (which as I see has failed) want to change the situation for better, then the only remedy is meditation, both mindfulness and Vipassana. The positive vibrations that will emanate from yogis who meditate from world leaders to ordinary citizens will sooth the four great elements and they will go back to their normal frequency of change, making life beautiful for all of 7.7 billion humans.