Mr. President, economic policy will make or break you 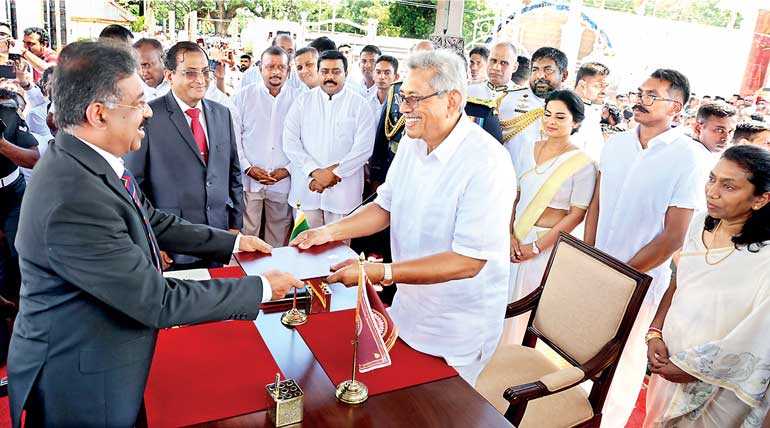 The election result was probably not a surprise. The economic performance was well below par over the last four years and the outcome was inevitable.

On one hand economic growth has plummeted to the lowest in South Asia at around 2%. The per capita GDP seems to be stagnant around $ 4,000. This, coupled with high fiscal deficit and high debt, may imply that Sri Lanka is in a low middle income trap. At the ground level, the ambition of most is to go for greener pastures overseas. That is likely to intensify in an irreversible manner if the economy is not addressed carefully and astutely immediately.

The new President has the formidable challenge of turning around the economy. It would be essential to learn from the mistakes made in terms of economic management from 2005-2014, as a repeat of the same mistakes could worsen the economic situation.

The management of the economy during 2005-2014 is undoubtedly better than the period of 2015-2019. However it was far from perfect. There are many areas that could have been addressed better and that’s what needs to be done in the coming five years. Some of these aspects would be:

1. Insufficient investments and effort made to penetrate external markets.

2. Insufficient investments and effort made to bring down technology to develop export oriented SMEs and industries.

3. Excessive investments on domestic infrastructure projects which were not directly beneficial to the masses and the ultimate dissatisfaction of masses by end of 2014.

4. Focus on Consumption driven growth rather than export/investment driven growth, which was not sustainable as seen by the decline in economic growth from over 8% in 2010 and 2011 to 5% by 2014.

Sow the right seeds in the first two years

The new administration should realise that substantial and sustainable benefits could be achieved only by the fourth and fifth years. The first two years would be to sow the right seeds. Then the expected harvest would be generated by the fourth and fifth years. In that light, the first two years could be spent on the following:

a. Acquire technology with a view to developing SMEs and technological industries which could earn foreign currency.

b. Penetrate international markets for the above industries and SMEs.

c. Exploit the significant interest of China and USA on Sri Lanka to achieve a) and b) above. A negotiation process should commence immediately with these superpowers. This would be crucial as just depending on normal market forces entails severe competition which would seriously hamper the success of penetrating external markets.

e. Develop the human resource needed for the sectors mentioned above.

Expect the harvest by fourth and fifth years

i. A successful implementation of the above in the first two years would set the stage for a sustainable high growth economy by the fourth and fifth years which would include:

ii. A rapid increase in SMEs and technology oriented industries across the country

Creation of thousands of high paying jobs across the country

iii. A sustainable, high growth economy exceeding 7% and a consistent increase in income at household level throughout the country

iv. A rise in appropriate investments (FDIs) into the country

v. A substantial increase in foreign currency earnings which would provide a sustainable long term solution to the external current account deficit

vi. Improvement in the external current account deficit would provide a long term sustainable solution to the problem of excessive foreign debt of the Government

Priority should not be given to improve other indicators such as fiscal deficit or Government domestic borrowings etc. Once the above progress is made, such indicators could be rectified easily beyond the fifth year when the economy is in a more stable footing. Trying to achieve too many things with limited time and resources is a recipe for achieving nothing at the end as we have seen clearly in the past.

Reaping harvest early is a recipe for trouble

A number of short-term reliefs were proposed by both the main candidates. It is true that the masses are facing hardships. However, giving away unaffordable concessions immediately could become a massive burden to carry out the much needed measures as described above.

For instance, the present Government did the exact mistake by a massive public sector salary increase in the first year in office and spent the majority of the following four years trying to recover it by increasing taxes and halting the economy. The election result is a clear verdict of how people evaluated that approach.

The newly-elected President would also be evaluated by the ground situation in the fourth and fifth years. That to a large extent would depend on the direction he takes in the first two years. If he doesn’t get it right in the first two years, it would be too late by the third and fourth years.  Public would not be hoodwinked by window dressing measures such as increase in public sector salaries in the fifth year. The masses are smarter than that.

(The writer can be contacted on waruna23@hotmail.com.)