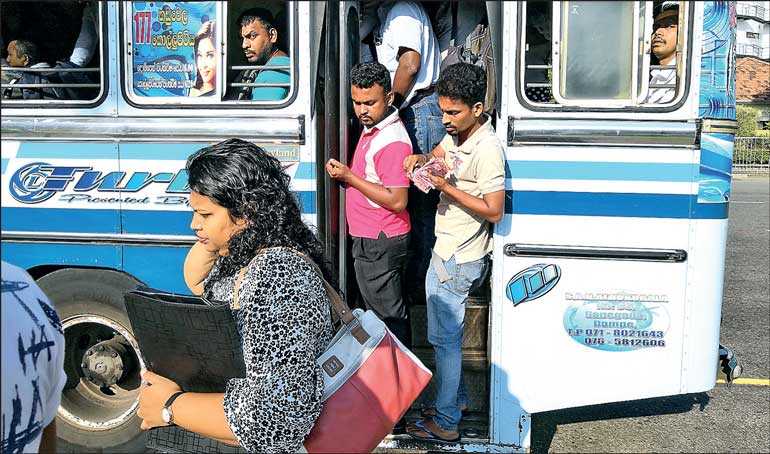 The larger part of the MCC Compact—the $ 350 million transport project—focuses on modernising bus transport and improving traffic management systems, which would contribute towards crucial improvements in public transport and provide tangible benefits to the poor – Pic by Shehan Gunasekara

It is a sign of these political times that even an apolitical issue like a foreign aid program becomes a hot topic in Sri Lanka. In April 2019, the Board of Directors of the Millennium Challenge Corporation (MCC) approved a compact program for Sri Lanka. This is a large five-year grant that was provided to Sri Lanka on the basis that it meets the MCC’s eligibility criteria of good governance, economic freedom, and investment in its citizens.1 It will be

implemented by a team appointed by the Sri Lankan Government, under the guidance of MCC. Critics of the MCC Sri Lanka Compact (hereafter the MCC Compact) raise a host of legal, environmental and external political interference issues. Meanwhile, proponents argue that it can reduce bottlenecks in transport and commercial land administration. The time is ripe for a simple cost-benefit analysis of the MCC-Sri Lanka Compact from a national economic perspective.

Another potential benefit is that the MCC Compact could help Sri Lanka re-balance its sources of development finance and external influence. The good news is that Sri Lanka was classified as an upper middle-income country by the World Bank in 2019. But the bad news is that the country is heavily reliant on foreign development financing from capital markets and development partners because of a problem of twin economic deficits and a low tax base. At least half Sri Lanka’s borrowing in 2018 was from private capital markets, and nearly a third from China.4 Multilateral development banks and Japan are also notable financiers. A high concentration among a handful of financing sources is inherently risky for any developing country, making it vulnerable to external shocks and external policy manipulation. Diversifying the sources of development finance facilitates better national macroeconomic management and the MCC Compact can help this process.5 The MCC Compact would also help rebalance the country’s geopolitical interests away from the perceived dependence on China and the debt-trap diplomacy narrative, to Sri Lanka’s historical foreign policy of non-alignment.

An additional potential benefit is its contribution to improving infrastructure development. Sri Lanka comes out as low as 65th out of 144 countries on the 2018 World Economic Forum Infrastructure Quality Index. On urban infrastructure such as road quality in Sri Lanka is well below upper-middle income Malaysia, and even below low-income Pakistan. Decades of under-investment means that Sri Lanka needs to invest at least $ 30 billion over a decade or so to tackle infrastructure gaps, and attain the standards of upper-middle income countries. The larger part of the MCC Compact—the $ 350 million transport project—focuses on modernising bus transport and improving traffic management systems, which would contribute towards crucial improvements in public transport and provide tangible benefits to the poor. The transport project has an estimated rate of return of some 19% according to MCC and is expected to increase the relative efficiency and capacity of urban and provincial transport infrastructure in the Western, Central and other provinces.

These expected benefits notwithstanding, some quibbles with the MCC Compact should be noted. One quibble is that the land project seems ahead of its time in terms of the country’s reform agenda. A small land project—envisaged amounting to $ 67 million—seeks to improve the land administration policy in Sri Lanka. Specifically, it seeks to map and survey state lands, strengthen government capacity and provide help with the digitisation of deeds. The land market is a ‘mallum’ with multiple distortions and information gaps which inhibit business investment and hinder Sri Lankans. However, land ownership is a politically sensitive topic, and is better included in a future economic reform program along with the other difficult issues like public sector reform. Instead, the MCC Compact should have prioritised the pressing issue of improving agricultural productivity in the North and North Central provinces of Sri Lanka. Modernisation of ancient irrigation tanks in North Central Sri Lanka, and introducing new technology and management practices into small-holder farms in the Northern Province, are important policy priorities to foster agricultural transformation. Reviving small fisher folk through the spread of sustainable fishing practises is also important. Another quibble is that the administrative overhead seems high with some $ 50 million (10% of the total grant) allocated towards program administration and oversight. While this might be standard MCC operating procedure, it seems wasteful. A rough rule of thumb from World Bank projects in Asia and the Pacific is that an overhead figure of 5-7% should be sufficient for administrative overheads in aid programs of this magnitude. A lower overhead means that more resources could be made available for development projects in Sri Lanka.

Finally, the MCC Compact is not well understood in Sri Lanka sparking the spread of fake news. This may reflect inadequate transparency and engagement with stakeholders (such as civil society, think tanks, businesses, and the media) by MCC during the design phase. Many foreign aid programs typically suffer from this affliction over the years.

Time is of essence for Sri Lanka to make a decision on whether to proceed with the MCC Compact. Sri Lanka’s attainment of upper-middle income status means grant funding will be limited in the future. An initial cursory look at the available documents, suggests that the MCC Compact could provide net benefits for Sri Lanka’s economic development. It is free money, diversifies the sources of development finance, and helps improve transport for the poor. If the quibbles regarding project priorities, overheads, and consultations could be reflected during implementation, it may be a better MCC Compact for Sri Lanka.

Dr. Ganeshan Wignaraja is the Executive Director of the Lakshman Kadirgamar Institute of International Relations and Strategic Studies (LKI). The opinions expressed in this piece are the author’s own and not the institutional views of LKI, and do not necessarily reflect the position of any other institution or individual with which the author is affiliated.

3 Assuming the loan and the interest are repaid at the end of five years and a compound interest formula is used, the $ 651.5 million figure comes from $ 480 million plus $ 171.5 million in interest payments.