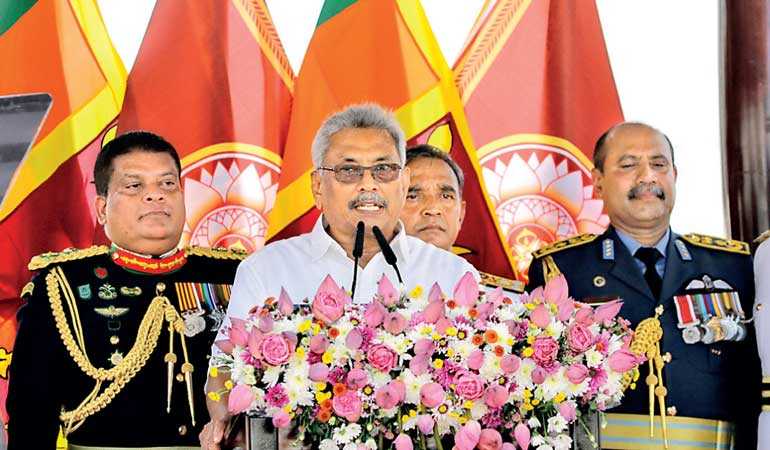 Sri Lanka has a new President who has secured a substantial number of votes at the Presidential Election over his main contender Sajith Premadasa. In the context of nation building, no one has won and no one has lost. The voters exercised their democratic right to choose the first citizen of the country.

It is also counter-productive from a nation building point of view to say the candidate who got more votes, received a mandate from the people. While it is true that democratic elections work this way and the one who received more votes get a “mandate” from the people, the mandate any leader receives in an election is not real a mandate in the sense that a mandate is given by only those who cast their votes for the contender.

This challenge arises from the polarisation witnessed in how the votes were cast. A majority of Sinhalese and Sinhalese Buddhists have voted for Rajapaksa, and an overwhelming majority of Tamils and Muslims have voted against him.

If the nation is to move forward where the rewards of development, of democratic rights, of social justice and upliftment is to be shared by all, Rajapaksa, Sajith Premadasa and the leaders of the Tamil and Muslim parties have to come together on a common platform to identify and agree on the requisites for nation building.

The very gracious speech made by Premadasa after the election when he warmly congratulated Rajapaksa, is a good forerunner and an example of how a leader should respect the verdict of the people.

In general, this election could be taken as a turning point in how civility could be ushered into what has historically been a less than civil process when people expressed their will.

Rajapaksa’s inaugural speech in Anuradhapura soon after he was sworn in as the seventh Executive President of Sri Lanka set the tone for how he views nation building. Besides stating that he is the President of all Sri Lankans irrespective of whether they voted for him or not, he also seemed to define some parameters within which nation building should happen. He seemed to indicate that in terms of reaching out to minority communities, whom he said he tried to reach out to before the election, his expectations had not been realised to the extent he had wished.

The parameter he appears to have defined is that equality and harmony must be found within the reality that Sri Lankan heritage is predominantly a Sinhala Buddhist heritage and as other ethnic groups did before, they should recognise this reality and move forward with the recognition of this reality. His point of view was that this fact did not make Sinhala Buddhists superior to others but just that the majority view was important in forging a partnership with all other minority communities.

The fact that the inauguration was held virtually under the shadow of one of Sri Lanka’s illustrious Kings Dutugemunu, who defeated an invader King Elara, was a member of the Tamil Chola dynasty, also known as “Manu Needhi Cholan”, who upon capturing the throne became king of the Anuradhapura Kingdom, in present-day Sri Lanka, from 205 BCE to 161 BCE) was not lost on many onlookers.

President Gotabaya Rajapaksa is right about the virtual boycott of him by Tamil and Muslim people, judging from the way Tamils and Muslims voted. They have made him virtually the President of Sinhala Buddhists. This is unfortunate as Rajapaksa should have been given an opportunity to show how he will act as the President in nation building.

Now, the onus is not just with President Gotabaya Rajapaksa but importantly, with the leaders of the Tamil and Muslim parties to find a path to live with dignity and equal rights in a Sinhala Buddhist dominated country and chart a course towards depolarisation and nation building.

There are some questions on the realities that will have to be faced and accepted if a genuine attempt is to be made to find the path and the means to bring the nation together and end its polarisation.

Will the minority communities recognise the inseparability of the dominating culture of the country and Buddhism in Sri Lanka? Buddhist culture and the Buddhist doctrine seemed to at odds with each other when one looks at cultural practices engaged in, in the name of Buddhism. This is however a reality and they are practices that are part of the heritage of the country.

The challenge is for some to accept this reality and work with that reality to charter a path jointly to engage in nation building. It is unlikely that there can be sustainable nation building unless one accepts and works within this reality. On the other hand, the Sinhala Buddhist community has a major responsibility to reach out to minority communities to make them feel they are equal with the Sinhala Buddhists and that some are not more equal than others.

The current polarisation as evident from how the Tamils and Muslims voted, does not auger well for nation building.

Amongst the Tamils, the politicians themselves, rather than their clergy therefore need to take stock of where the Tamil community is now, and where they wish them to be along with the Sinhala and Muslim people. The Muslim clergy on the other hand may have an equal responsibility as Buddhist Monks have, to determine how the Muslim community will mesh with the Sinhala and Tamil communities.

The current polarisation and every community basically operating from their own corners, will not make Sri Lanka an inclusive, harmonious country. President Gotabaya Rajapaksa, along with leaders of all communities, political leaders, religious leaders and civil society leaders should sit down together to ask the question what they could collectively do for the country and the people, and not the usual what it can do for them.