Home / Columnists/ Is any further expenditure on the Port City a waste of money? 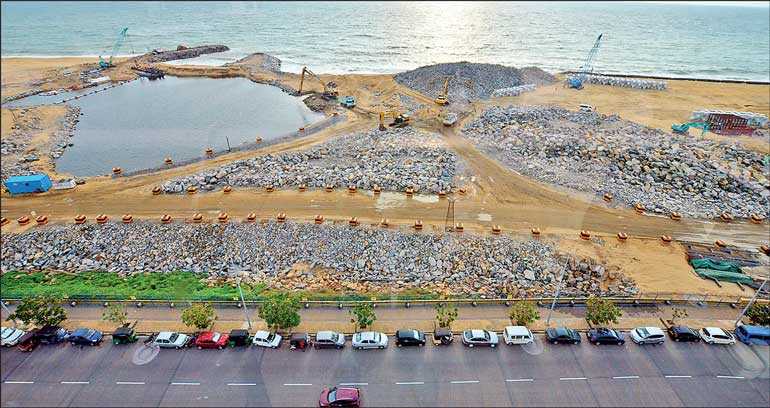 There is a fairy tale floating in the air, that an offshore financial centre in Port City will bring in billions of dollars to Sri Lanka, and which will remain and permanently boost our balance sheet. That is very much like a RW fairy tale

Erase from the mind all that you have read and heard about it. Then take a blank piece of paper, draw an irregular circle, and draw a line to divide it into two. On the bottom half write 300 acres. That is our Port City!

To get the size into a proper perspective it must be compared to other things. It is not tiny and it is not huge. It is twice the size of the Royal Colombo Golf Club. It is smaller than our family coconut estate (and other similar estates) taken over by the Land Reform Commission. There are 114,000 acres of tea in Nuwara Eliya District from 195 estates making the average size of an estate 585 acres, which is nearly double the size of the Port City.

What is special about this 300 acres?

Nothing! There is nothing special, about a small plot of 300 acres created by the Chinese, reclaiming land from the sea, so that they can own/lease an adjoining plot of land in the Port City for 99 years.

Is it sensible to give China land, on which they can mount missiles pointed at India? Have an armed presence to intimidate us? What are the environmental effects of this land reclamation, etc.?

This has all been debated, and there is no purpose in opening this subject all over again. It is now done and dusted. What we must address with alacrity is whether we should spend billions of rupees developing this small piece of land.

China has been quite open about their objectives. They have no oil or gas. They will shudder and crumble, if they do not have oil and gas. To protect the sea route to China they planned to secure a series of ports in countries on the sea route to China. If threatened they could put military fire power in these ports to ensure that ships with oil will reach China. They have achieved this objective.

They gave it fancy names like restoring the Silk Route. We were on this route so China “persuaded” us to build the Hambantota Port and to reclaim land for the Port City. They also like to have countries on this route indebted to them. So they give loans to finance the building of ports. They ensure that Chinese companies get the building contracts. So they get their money back.

Nice little trick. They get the port. They get back the loan back through their companies that built the port, our loan remains, and whilst we groan under the debt, China has a smile on its face.

What will it cost?

Any investment must give a return. There are many complex methods of measuring returns on investment, but the simple cash back is easy to understand and widely used by both entrepreneurs and companies. The pay back or cash back is the number of years it will take for the profits from the investment to return the sum invested (in my corporate business life we looked for a five-year cash pay back on all investment projects).

Risky approach 2: Do the infrastructure and build a city at a cost of Rs. 180 billion. The cost to recover will be Rs. 360 billion. Will it be possible to sell real estate (land, buildings, apartments) in this city to recover this investment?

The back of the envelope numbers in this article are adequate to sustain the argument that it will be a formidable challenge to develop a business model that will provide a decent return on any further investment to develop the Port City .

If the Government wants to spend 360 billion or a similar large sum, someone important like the President or Prime Minister or the Minister of Finance must do two things, namely, commit to the payback period on the investment (put their neck on the line) and also importantly explain why it is not better to spend 360 billion to develop other projects in the country that will be of benefit to the people of the country.

What good will a port city do for 70% of our people who live in rural areas?

Another fairy tale was clapping one’s hands and creating a million jobs. Of course a million jobs did not materialise. An offshore financial centre bringing in billions of dollars is in the same class of a fairy stories.

The oldest and most respected is Switzerland. Some of the other well-known centres are the Cayman Islands, Bahamas, British Virgin Islands, Gibraltar, Guernsey, Dubai and Malaysia

The key feature of offshore financial centres is that very, very little is controlled and no tax. There is free movement of money in and out of the country, no income tax or capital gains tax or withholding tax.

There are well-known financial service firms in these centres that manage the funds of clients, and help them to optimise returns on their funds. There is a simple and clever arrangement that is widely used to keep secret the ownership of money in these offshore shore financial centres.

A new company is formed offshore and all investments wherever are made by this company. The financial services firms will provide nominee directors for these companies. Nobody can find out who owns these companies.

People who have made big money are smart people. They do not just park their money in an offshore bank. They do three things. They use financial services firms to invest to optimise returns. They remain anonymous behind their companies. They select well-known, trusted, longstanding offshore centres in very stable countries with no foreign debt problems

Sri Lanka can put in place the necessary legislation for an offshore financial centre. That is the easy part. Opportunities for investment in Sri Lanka in rupee-denominated investments will not be deemed attractive or safe due to the risk of devaluation of our currency.

Investors who want to just keep money in an account will not select Sri Lanka due to our political instability and large foreign debt. They will be much more comfortable leaving their money in Switzerland or one of the other longstanding, well-known offshore centres.

What this adds up to is we are most unlikely to see funds kept for prolonged periods in any bank in our offshore unit, and we will not see billions of dollars coming in to permanently boost our balance sheet.