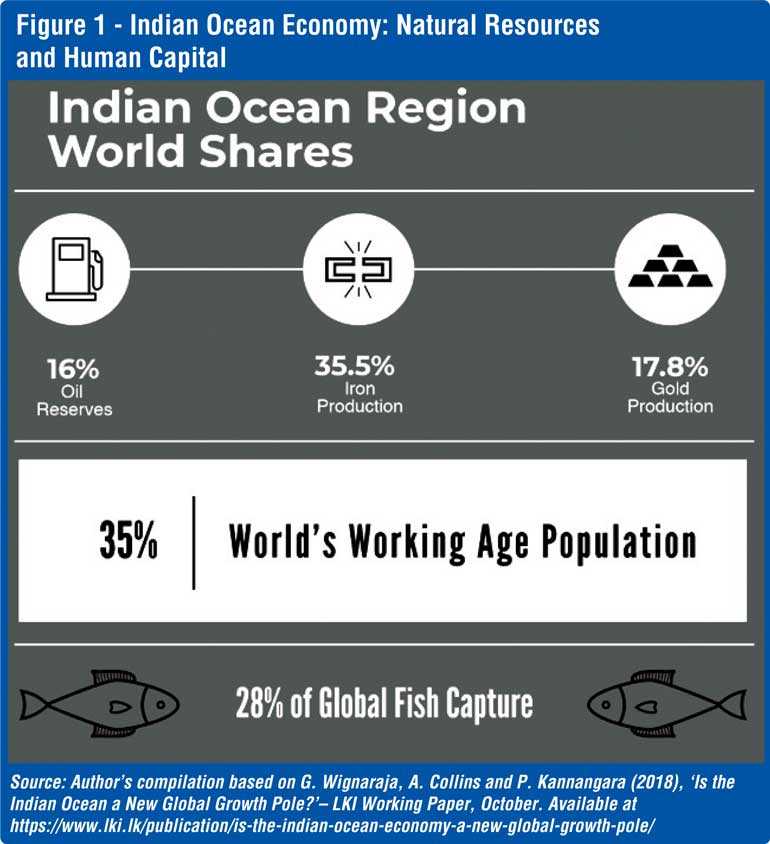 As Sri Lanka gears up to host ‘The Indian Ocean: Defining Our Future’ conference this week, it is worth examining the benefits that Sri Lanka stands to gain from greater engagement with over two dozen countries, spanning three continents, across the Indian Ocean.

Prime Minister Ranil Wickremesinghe’s recent article highlighted the need for countries in the Indian Ocean region (IOR) to establish a rules-based order, to ensure the maritime security of the region. However, the need for greater engagement extends beyond security. Sri Lanka’s decision to play a key role in the IOR is informed not only by an awareness of the growing importance of the Indian Ocean, but also by the region’s great potential to benefit Sri Lanka’s economy.

The island’s strategic location along the critical East-West trade corridor affords it a unique opportunity to engage with its Asian neighbours, and in addition, with those in Africa and the Middle East. Leveraging these partnerships will be vital for Sri Lanka as we look to position the country as an economic hub at the centre of the Indian Ocean.

The need for new growth opportunities

With a domestic market of around 20 million consumers and a still-modest per capita income, Sri Lanka cannot afford to rely on increased domestic spending to stimulate long-term, sustainable growth. Although the country has recorded an average growth rate of 5.8% during the post-war years (2010-2017), and experienced a rapid decline in poverty, its engines of growth have started to show signs of structural decay.

The main challenge is on the external side. The country’s export-to-GDP ratio has fallen from 35% in 2000 to an alarming 13% in 2017, while our share of global exports also declined from 0.08% in 2000 to 0.05% in 2017. Moreover, the country’s inherited debt burden, due to persistent budget deficits, saw the Government paying 87.5% of its revenue on debt-servicing last year.

Together, these shifts have also increased pressure on the currency, caused by the recent strengthening of the US dollar. The need, therefore, for Sri Lanka to seek a growth model marked by stronger relationships with countries in the IOR and beyond, is now more critical than ever before.

The Indian Ocean economy presents Sri Lanka with renewed opportunities, particularly in trade and investment. In 2017, total trade in the IOR accounted for 15.7% of global trade. Considering the rapid economic growth in the region, this percentage is likely to increase exponentially over the next decade.

This is especially true given the accelerated expansion of maritime infrastructure. The IOR currently hosts 23 of the world’s top 100 container terminals, and boasts container traffic of 166 million TEUs (a four-fold increase from 2000). Based on current projections, this number is estimated to increase to over 191 million by 2020.

Beyond infrastructure, initial reviews of the data further suggest that the IOR meets all of the initial conditions for trade-led growth (Figure 1). The diversity of natural resources, fish stocks, and human capital, indicate that the Indian Ocean has broadly favourable conditions to support trade-led growth in the IOR countries. It is important to note that no country in the world has achieved high-sustained growth without export expansion. Therefore, it is in Sri Lanka’s best interest to leverage opportunities to capture the benefits of these emerging markets.

Increased trade flows in the Indian Ocean are also likely to be accompanied by rising Foreign Direct Investment (FDI) into the region. In the past seventeen years alone, FDI inflows increased five-fold: from $44 billion in 2000 to $239 billion in 2017. Given the region’s growing importance in global trade, it is likely that the IOR will see a rise in the number of investments in the region.

Sri Lanka’s foreign investment has remained below 2% of GDP over the past twenty years, and has been concentrated in infrastructure. Therefore, seizing investment opportunities of the IOR is vital for Sri Lanka as it looks to expand its investments into other sectors linked to global and or regional production networks, where trade is most dynamic.

Sri Lanka’s future in the IOR

While it is evident that the IOR presents Sri Lanka with lucrative prospects for growth, it will not guarantee positive economic outcomes, unless the country takes proactive steps and develops stronger policies to leverage these opportunities. This is why, over the past three years, the Government has worked tirelessly to strengthen economic engagements in the IOR.

Our efforts to develop new trade partnerships with countries such as Singapore reflect the Government’s commitment to Sri Lanka’s integration into high value-added global production networks. It is our belief that these agreements are integral to opening up new production possibilities for the country.

The Government’s innovative Enterprise Sri Lanka credit program will further empower Small and Medium Enterprises (SME) to reap the benefits of these opportunities to a greater extent.

In convening this week’s conference on the Indian Ocean, the Government will continue the vital work of engaging with countries in the region to secure our economic future. The Government will stay on course to develop a cohesive policy environment for businesses, including improving tax and other incentive structures, the ease of doing business, and other reforms, to attract enhanced foreign direct investments.

If Sri Lanka is able to realise these plans in the coming years, it will undoubtedly be able to transform its economy, and position itself as a future economic hub in the Indian Ocean.

(The writer is State Minister of National Policies and Economic Affairs.)