Home / Columnists/ In search of future prosperity: Inspiration from a splendid past

In search of future prosperity: Inspiration from a splendid past 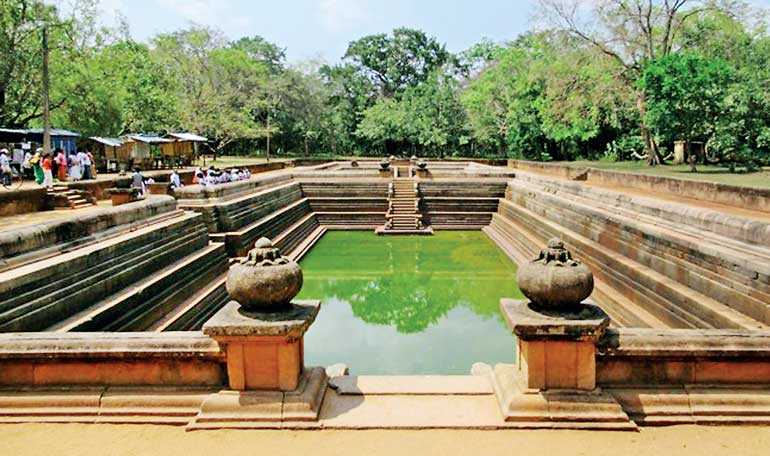 The Presidential Election has taken centre stage in our discussions amidst economic challenges engulfing the country. Every time I come back from an overseas visit, the thought lingers in my mind how other nations are surpassing us in terms of growth whilst we stay embroiled in multiple socio-economic complexities.  Sri Lanka’s illustrious hydraulic civilization gives us much hope as an island of ingenuity.

As Peter Drucker observed, there are no good or bad institutions but well-managed or ill-managed institutions. This can be applicable even to a nation, where the results clearly show which of the above aspects suit us more. It is pertinent to draw inspiration from our profound past in order to progress ahead with the correct leadership. Let me refer to comprehensive research done by my good friend and a fellow engineering batch mate Dr. Chandana Jayawardana in this regard.

Sri Lanka is well-known for its ancient water civilization. The earliest reservoir referred to in ‘Mahavamsa’, the great historical chronicle of the island, was the ‘Jayavapi’ built in the reign of King Pandukabhaya (377-307 B.C. The construction of larger scale reservoirs was initiated in the time of King Vasabha (65-109 A.D.). By 500 A.D., it involved advanced hydraulic structures which would have required sound knowledge of key hydraulic principals pertaining to rainfall, runoff and storage volumes. This trend continued till the reign of King Parakramabahu I (1153-1186 A.D.).

The long development phase had by then established a widely-spread mosaic system of reservoirs and canals, regulating the water flow. This flow was either extracted from natural streams or received from direct rainfall for agricultural and human utility purposes, as well as being a flood management and soil conservation system. Mendis (2002), referring to the functions of the ancient irrigation works, notes that a well-established water and soil conservation ecosystem is evident.

According to chronicles and inscriptional evidence, the ownership of ancient irrigation works had been vested with the State, Buddhist monastic establishments, village institutions or with individuals. All minor and major canals and tanks built by the king were the property of the State and their income in the form of taxes on water and fish yield absorbed by the royal treasury. Large irrigation works might most probably have been owned by the State, considering the scale of labour and the material consumption for such work.

Ven. Walpola Rahula (1993) notes that the monasteries owned property from about the second century B.C. through royal and private grants of land and irrigation works. The irrigation works so donated were usually small tanks but there is at least one recorded instance of a donation of a major canal, namely the Alahara, to a monastery sometime after its construction.

One of the inscriptions at Viharagala refers to the donation of the Upaladonika reservoir by King Vasabha (67-111 A.D.) to the Ekadorika monastery. Two of the earliest inscriptions at Thonigala and Eriyawewa refer to grants of reservoirs to monasteries by provincial rulers called ‘parumakas’. Perera (1949) noted that from the time of King Lajjithissa (119-109 B.C.) onwards there are many references to grants both of reservoirs and canals to the Sangha by individuals.

Sri Lanka is well-known for its ancient water civilization. The earliest reservoir referred to in ‘Mahavamsa’, the great historical chronicle of the island, was the ‘Jayavapi’ built in the reign of King Pandukabhaya (377-307 B.C. The construction of larger scale reservoirs was initiated in the time of King Vasabha (65-109 A.D.). By 500 A.D., it involved advanced hydraulic structures which would have required sound knowledge of key hydraulic principals pertaining to rainfall, runoff and storage volumes.

Thennakoon (1986), highlighting the functions of small reservoirs, notes that apart from irrigating cultivation they also provided multiple uses, including the augmentation of the ground water table in order to keep the domestic well water supply at a minimum level during the protracted dry season. Another function of some reservoirs was sill tapping, known as ‘kuluwewa’, during the rainy season.

Since the village tank is a vital part of dry zone settlements, tanks constructed with the communal labour of villagers were owned by village institutions. Samanthapasadika refers to instances of reservoir construction by villagers and communally-owned village reservoirs.

Likewise, individuals also owned small reservoirs and canals. Siriweera [2004] identifies the term ‘vapi-hamika’ found in Brahmi inscriptions from the third century B.C. onwards which denotes ‘tank-owner’. The Thimbirivava inscription of the third century A.D. refers to a reservoir owned by a family, ‘Tumaha kula sataka’. As mentioned earlier, reservoirs and canals were granted to the Sangha by individuals because those works were owned by those individuals. The Kahambiliyavava inscription of Vikramabahu I (1111-1132 A.D) indicates that irrigation works owned by individuals continued to exist until the end of the dry zone civilization period.

From the above description, it is evident that irrigation works were owned by several institutions depending on the utility of funds for those enterprises. This ownership gave the right to earn revenue from reservoirs as well as from canals through the supply of water and fishery.

Considering the massive material and labour resources required for the construction as well as maintenance of irrigation works, there should have been an adequate income generated from those enterprises. Further, Codrington [1937] notes the responsibility of the State for infrastructure development, which would have been funded by some form of taxation. The evidence of such taxation methodology have also been noted by scholars who investigated the contents of ancient inscriptions.

There was also a well-organised water distribution system to ensure an equal share for all cultivators during periods of scarcity. Codrington (1937) identifies three types of paddy fields categorised for the purpose of taxation from 12th century A.D., namely ‘utthe’, ‘meda’ and ‘pesse’, in decreasing order of soil fertility. As mentioned in the commentary ‘Vissuddhimargasannaya’, the farmer’s share of water was called ‘diyamura’. For this he had to pay a stipulated amount to the water supplier, which was called ‘dakapati’ in the early Anuradhapura period and ‘diyabedum’ in the late Anuradhapura period.

From the above discussion, it is evident that there were several economic transactions associated with the ownership of irrigation work and water usage. Owners of a single component of the cascade could earn by supplying water or fish yield to downstream users. At the same time, he had to pay for water he received from upstream suppliers.

Arumugam (1957), identifying the importance of small-scale village tanks, notes that the village reservoir had been the provider of all the material needs of village life; thus when the reservoir breached, the village migrated to a different location. Panabokka and others (2002), analysing the technical data of several cascades in detail, notes the different water spread areas of the reservoirs, varying from more than 80 hectares to less than 10 hectares in size.

Based on the above evidence, it can be assumed that a cascade comprised different scales of reservoirs. The ratio of total reservoir capacity to the command area is another parameter used to calculate the difference in the size of reservoirs. Thennakoon (1986), highlighting the functions of small reservoirs, notes that apart from irrigating cultivation they also provided multiple uses, including the augmentation of the ground water table in order to keep the domestic well water supply at a minimum level during the protracted dry season. Another function of some reservoirs was sill tapping, known as ‘kuluwewa’, during the rainy season.

It can be concluded that the ancient irrigation system in Sri Lanka possessed a sound economic footing, in addition to its much-explored technical background. Interested parties might have invested in irrigation enterprises and sometimes diverted the returns of their investments to the maintenance and upliftment of Buddhist monasteries. Taking into account the massive numbers of monks who had resided in monasteries such as Maha Vihara, Abhayagiri, Chethiyagiri (known as Mihintalaya today), there would have been a continuous flow of funds for their sustainability, a requirement fulfilled by the revenue from the reservoirs.

Returns on those investments were subjected to regulatory processes. The regulating bodies might have used the water rates to decide the capacity of reservoirs and canals. This would have been an essential feature in an irrigation system such as the one in ancient Sri Lanka, where many reservoirs and cannels were interconnected in the form of cascades. The personal interests of the owners may not have been aligned with the optimum operation of cascades. If individuals had been allowed to construct irrigation structures as they wished, it would have adversely affect the sustainability of the interconnected cascades, a situation that would have been prevented by regulating bodies manipulating the water rates.

The management marvels of “hydraulic Sri Lanka” sends us a clear message. Rather than being overly dependent on knowledge and skills from overseas, we must invest in a serious and focused approach to unearth our indigenous best practices. Rather than being pessimistic of our own prospects in the face of other nations surpassing us with vision, passion and action, we need to rally around a strong, stable and strategic leadership to navigate the nation. Taking such best practices into next generation by appropriately adapting to socio-technical needs is a must. Rapidly changing technology assists us in linking past glory to a prosperous future.

The starting point perhaps is the appreciation of what we once had, and the acknowledgement of what we have forgotten. Re-awakening an indigenous management outlook which naturally fits local needs and is flexible to global needs is the sure way forward.