If Sajith wants to win 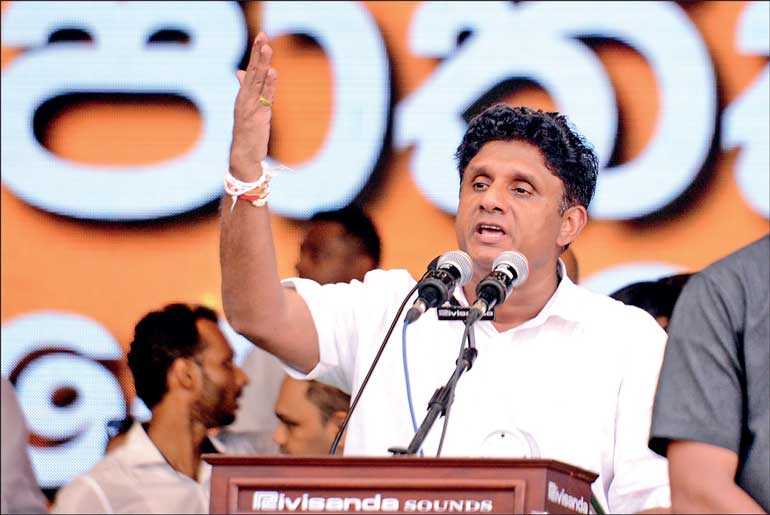 Presidential Elections are more about candidate and less about the party. That explains the curious, yet familiar process that we have witnessed in recent weeks; would-be candidate refashioning the party structures in his own image or attempting to do so.

The outcome of course, depends on how the country-wide constituency comprehends the ideology of the candidate and more importantly, his or her capacity to deliver on promise.

It is the candidate who can make or unmake the coalition of forces that gravitate towards his candidacy. That can happen only if the candidate is perceived as the wining horse. The ‘man’ overrides the ‘manifesto’.

The party turns to the candidate for survival and success. The ‘person ‘alters, and redirects the ‘history’ of the party, that provide the skeletal structure and the voter base that goes with it.

The movement that gradually takes shape between nomination and election is dependent on the ability and appeal of the chosen leader.

Sajith Premadasa demonstrated this ‘truth’ at the Galle Face rally. The UNP establishment discovered another painful truth 24 hours later. At the Elpitiya Pradeshiya Sabah election, the party clearly demonstrated its petrified position since the year 2006.

The spectacle at Galle Face and the debacle in Elpitiya, taken together holds a hard truth. In politics failure is decisive. A political party that ignores this basic premise is headed to oblivion. Galle Face indicated to the promise of Sajith’s candidacy. Elpitiya points to the petrified plight of Ranil’s leadership.

The purpose of a political party is to make sense out of structures of authority. It must dismantle the illegitimate and expel the irrelevant. That is the only way available for a political party to stay ahead of the competition.

Seeking justification for the inexplicable may be human nature but not good politics.

The UNP or a sizeable majority within it, decided to field Sajith Premadasa as its presidential candidate. They did so for several good reasons.

In this age of 24x7 connectivity, Ranil Wickremesinghe fails to connect. His pontifications on economics is absolute gobbledygook for the young, the old and the sensible. A series of accidental quirks made him the Leader of one of our mainstream political movements. Since then he has focused his full energies for the single-minded task of explaining the accidental as preordained history.

Stalin famously asked how many divisions the Pope commanded. Nobody asks Ranil how many votes a former Attorney General or a Rotarian lawyer commands. There is a segment in the UNP’s political class ready to buy this balderdash. This miniscule group makes its way to Ranil’s cabinet through the National List. What we must remember is that they don’t get elected either in the north or the south.

Sajith Premadasa must now walk the talk. He must stop beating around the bush. At Galle Face he did take the bull by the horns but quickly sidestepped the issue. The spirited bull fighter held his cape. He reminded the people’s assembly at Galle Face how hard he had to fight for the candidacy of his party. He was not the choice of the Party Leader or the magic circle that manages its affairs.

If the party decided to relent, it was only because it was a proposition they could not afford to reject.

Sajith thanked the Leader for his graceful acceptance of a fait accompli that Harin Fernando and Mangala Samaraweera pulled off as a military manoeuvre, the outcome of which was uncertain until the Elections Commission gazetted the date of nominations.

Those who defied Ranil Wickremesinghe’s grabbing, greedy appetite for clinging on to power within the party and insisted on Sajith Premadasa’s candidacy have been proven right. The success of the mass mobilisation at Galle Face demonstrates that there is a residual power within reach of the UNP and its allies. That residual power alone cannot confront the hegemony of the Rajapaksa family and its ‘strong man’ Sinhala Buddhist’ messiah.

For Sajith Premadasa to win, he must reach out to a wider swathe of the electorate. In clear unambiguous terms, Sajith Premadasa must demonstrate to a sceptical constituency that the torch has indeed passed on to a new generation.

At Galle Face, Sajith Premadasa took considerable pains to address the issue of national security. He fielded the Field Marshall to checkmate Gotabaya’s claimed wisdom on the subject. He can easily address public apathy towards the current Government’s demonstrated sterility by defining the composition and trajectory of the cabinet of ministers that he will preside over if and when elected president.

Gotabaya if elected president will have Mahinda Rajapaksa as his prime minster. Mahinda hopes that Ranil will be the leader of the opposition. That possible ‘theatre of the absurd’ is what makes the urban middle class secretly hope for a Gotabaya presidency that will bring about a shock reversal of all known possibilities. Politics is a business where the knowns are finite, and the unknowns are infinite.

When Sajith Premadasa wanted to speak on the impeachment of the Chief Justice, his Party Leader did not allow him Parliamentary time. He was helped out by the TNA that allocated time from its quota. Ranil Wickremesinghe seriously contemplated disciplinary action against his Deputy Leader for defying the Party Whip to condemn the impeachment of a sitting Chief Justice.

The urgency to publish this missive prevents me from delving into archived material pertaining to the disgraceful conduct of Ranil Wickremesinghe in the impeachment saga. A coward first abandons himself. After that all betrayals come easy. The bard has said it for all time.

“Our doubts are traitors and make us lose the good we oft might win, by fearing to attempt.” It must be said at this crucial hour that Sajith unlike Ranil did not fear to attempt.

To win, Sajith Premadasa must articulate and pursue a coherent set of positions on urgent public policy issues. He cannot do that with Ranil Wickremesinghe’s current stranglehold on the party. He should become more accountable to the voters and demonstrate to those who are ready to trust him, that he will govern more effectively and independently when in power.

Let us face it. Gotabaya may now operate under the more than ample shadow of his brother. No one doubts that as president he will be his own man.

Sajith Premadasa is uniquely positioned to deescalate the tensions within the anti-Gotabaya forces by acknowledging existing differences that need not frustrate our national imperative of consolidating the post 2015 democratic gains.

Identity politics is a zero-sum game that rules out the possibility of dialogue and compromise. That said, we must recognise Gotabaya’s brilliance in sustaining the semblance of an ongoing dialogue and the possibility of a compromise with minorities while outsourcing venomous chauvinism to an underworld of hired hooligans. With remarkable aplomb, the hooligans are removed from positions when exposed!

The division between Ranil’s coterie and Sajith’s following are deeper than mere differences of opinion on public policy issues.

The urban, cosmopolitan, affluent public opinion holds Gotabaya Rajapaksa as an effective leader to bring about positive societal transformation. And so does the nether world of tribal prejudice and clerical fascism.

When identities are at stake, consensus is not easy to achieve. Gotabaya may have a technocratic solution to the problem. Sajith Premadasa must in the next few days work out a human solution for that problem.

As Arthur Koestler said, ‘God seems to have left the receiver off the hook and time is running out’. Sajith Premadasa must send out a clear signal that the torch has passed on to a new generation that is in rhythm with the pulse of the universe. In my humble opinion Ajith Perera lost a million votes when he said that Ranil would be their leader till 2024.

Hyperbole, even if claimed as true, is a contradiction in terms. It’s a way of saying, ‘It’s a lie, but who cares?’