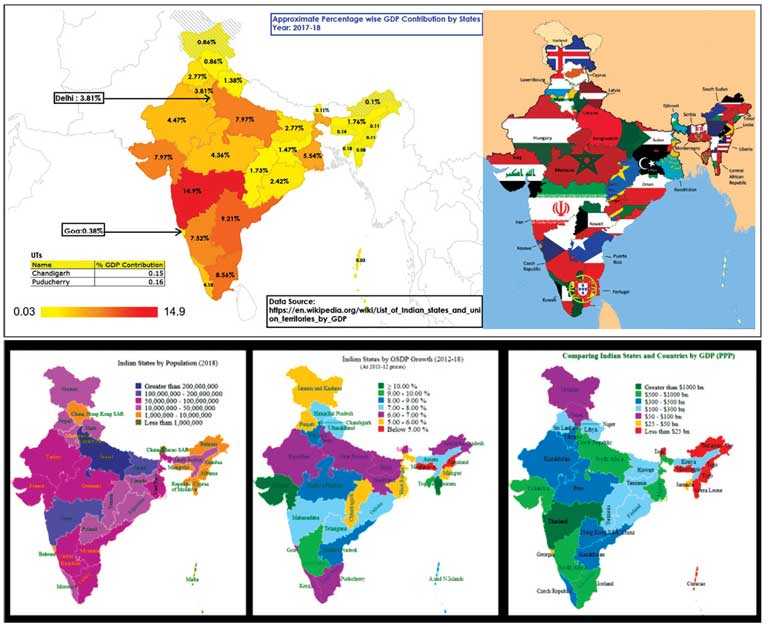 India, a land with a diverse culture and heritage, is no doubt the centre of the South Asia that can take rest of the countries surrounding it to greater economic prosperity within the next few

decades. This article is not a technical analysis of India and its opportunities, but a message to ordinary Sri Lankans to get a general idea of the opportunities that are available that could change our economic prosperity for the betterment by working in greater partnership with our neighbour India.

Recently in Washington DC, Indian Ambassador to the US Harsh Vardhan Shringla said that India took only five years to move from a $ 2 trillion to $ 3 trillion economy, as he expressed confidence that the country would touch the $ 5 trillion mark in the coming years. “It took us nearly 60 years after independence to achieve $ 1 trillion mark. It took 12 years to achieve our second trillion (dollar economy), and it has taken only five years, 2014 to 2019, to achieve the third trillion economy,” he further stressed.

I have been personally seeing the transformation of India over the last 20 years. A frequent traveller as a guest speaker to India, I have observed the change of mind set of many Indians to be self-conscious of wanting to be a great economic power of the world.

Being a democracy certainly India has its challenges and sometimes speed that one would observe in China would not be visible but what is important is the spirit of the nation and the reform agenda which is giving clear signals that it would be a massive economy within a very short span of time. The numbers speak for itself in my opinion.

The mindset of the majority of Sri Lankans is very negative when it comes to India although it is culturally, politically and religiously very close, but certain political elements have always used this negative perception to exploit political advantages making the economic opportunities to drift away.

On the other hand I always tell my Indian friends that India too saw Sri Lanka as a problem for its political stability due to the problems created by extremist elements of the north of Sri Lanka who try to take advantage of cultural connections of Tamil Nadu to distance bilateral engagement between the two nations. In fact, India has lost many golden opportunities in Sri Lanka as it never saw the economic opportunities in Sri Lanka until very recent times.

However, the fact remains that it is Sri Lanka which needs India more than India needs Sri Lanka to make our economy stronger although we are equal nations in sovereignty and identity.

Much of the public in Sri Lanka is unaware that nearly 80% of the Port of Colombo business is Indian cargo owners shipping their exports and imports via Colombo using international shipping companies. The number of tourists visiting Sri Lanka has grown exponentially over the years and trade volumes with not-so-healthy environment have also expanded between the two countries.

Pictures 1 and 2 show that India is not just a country but many countries within it, the economic contribution to the national GDP is showing that each state of India amounts to another national GDP of a country. In addition, the population of India is fast becoming an asset as it is creating enormous new markets to do business over the coming decades. The numbers are staggering, and this is an opportunity for Sri Lanka to open up its eyes to see what is sitting next to us just 27 nautical miles away.

India will be the third largest economy by 2050

It was just last week IMF Chief Kristalina Georgieva said that growth slowdown in India appears to be temporary and she expects the momentum to improve going ahead. Speaking at the World Economic Forum 2020 at Davos, she said the world appears a better place in January 2020 compared to what it was when IMF announced its World Economic Outlook in October 2019.

All credible global institutions have agreed that India will be the third largest economy within the next 30 years and a relatively a young population will increase the pull towards new products and services.

Recently published world economy growth charts by the IMF show the growth trajectory of the regions of the world for 2020-2021 and it seems that India is once again getting its momentum to 6%+ growth as China slows down. Sri Lanka as a nation must see the potential to integrate more with India as we are a market smaller than the Municipal Council of Mumbai in terms of population.

A message to the Government and business community

In a recent article I highlighted the fact that Sri Lanka should look at the Bay of Bengal Initiative for Multi-Sectoral Technical and Economic Cooperation (BIMSTEC) more carefully as its current chair. However, the Government’s response has been very negative to say the least, even a proposed coastal shipping arrangement and a partnership for feeder shipping with Bangladesh has been ignored.

Since the signing of the Indo-Lanka Free Trade Agreement at the beginning of the century, we have failed to agree upon a comprehensive economic partnership with India. Whereas the Comprehensive Economic Cooperation Agreement (CECA) between Singapore and India to strengthen bilateral trade was signed in 2005 and the business is booming between the two nations.

My advice to the Government and businesses is that the potential is huge. What is your take of a 10 trillion-dollar economy in 15 years’ time sitting next door? As a thousand words are embedded in the charts and pictures of this article, the inserted answer is hidden there. If Sri Lanka wants to prosper with a massive market next to us, we have to be pragmatic and work towards greater economic partnerships with India rather than wasting economic opportunities on cheap politics on the platform and confusing the ordinary public of this country and missing opportunities forever.

(The writer is an economist, currently working as the CEO of the Shippers’ Academy Colombo and the Chairman of the Logistics Advisory Committee of the Export Development Board.)