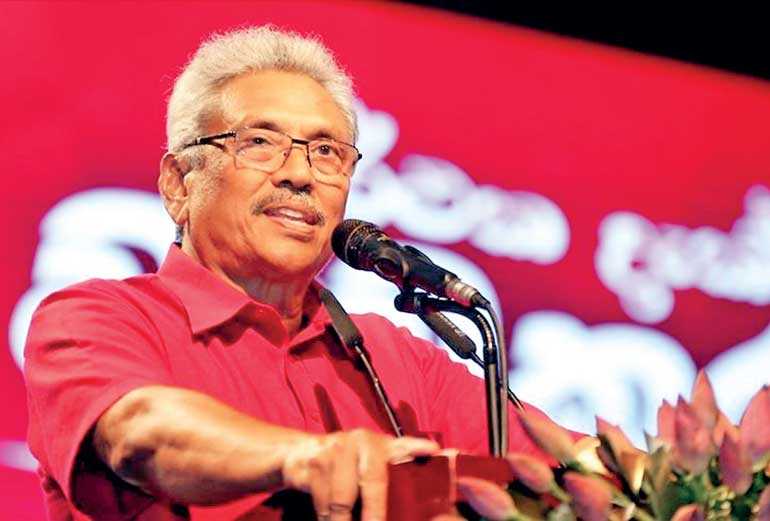 Soon after his victory at the election, President Gotabaya Rajapaksa publicly acknowledged that he was elected overwhelmingly by the Sinhalese, but promised to be a president for all communities. This is democracy at its best. However, words alone are not sufficient. They have to be translated into action.

The new President has already earned a reputation for being a disciplinarian and task master. His simplicity in persona, decision to downsize presidential security apparatus and pomp, strict timelines and guidelines to measure ministerial performance, and measures to introduce meritocracy in public sector appointments, etc., vouch for that reputation.

Although a presidency is what its occupant makes of it, in the ultimate analysis, it is a political office subject to numerous pulls and pushes, and the president should master the art of politicking in the interest of promoting greater good. The 48% that did not vote for the President exercised their legitimate democratic right, and bulk of that 48% happened to be the two minorities, Tamils and Muslims.

This Presidential Election once again bisected the nation ethno-religiously. It happened so because the forces that worked for GR’s victory wanted it to be so. They wanted to show the world that the Sinhalese, particularly Sinhalese Buddhists, on their own strength can rule Sri Lanka without any support from minorities. Therefore, GR’s supporters would certainly expect from him a regime that overwhelmingly satisfies the wishes of the Sinhalese majority at the expense of minorities.

Will the President therefore work to deny the minorities their legitimate share of democratic governance? The future of democracy in Sri Lanka and history’s verdict on this presidency would depend very much on how quickly GR learns the art of saying no to his supporters when their demands clash with demands of greater good.

The most important issue that faces the new presidency is that of post-war reconciliation with the Tamil community.

President GR has repeatedly expressed the view, and sated very recently in an interview with an Indian journalist from the Hindu newspaper that, what the Tamils need is not devolution of political power, but economic development. You are wrong, Mr. President.

Historically, Sri Lanka’s economic prosperity in pre-colonial era was largely the result of how magnificently the enlightened rulers of that time managed the country’s ethnic and cultural pluralism.

Even when young Dutugemunu defeated an elderly Elara in the battlefield the victor did not seek revenge on the Tamil community.

Instead he went on to construct the controversial Dhakkina Thupa, a memorial Dagoba, to honour his adversary (www.thesundayleader.lk/2011/05/22/dutugemunu-and-elara-betrayed).

It is a pity that children in our schools are not being taught of such beautiful episodes in the nation’s history.

Sri Lanka is a beautiful kaleidoscope of different cultures, languages, nationalities and settlements, and in that diversity lies the strength of this nation.

Politicians should understand that economic development is not simply a matter of capital investment, technology and efficient utilisation of natural resources.

There is something more fundamental than all this: participation of people. Population is the most precious of a nation’s assets. It is the people who make production possible ultimately, and it is they who benefit from that production. But, for them to participate and contribute they should live in a friendly environment and be free of fears and dangers arising from Machiavellian measures.

Unfortunately, even after a decade since the end of the civil war the Tamil community has not enjoyed the much promised peace dividend.

It is the primary duty of President GR to provide that environment as a prerequisite before embarking on his development project.

How best to provide that environment as part of the peace dividend without endangering the nation’s unity and democratic polity is the compelling issue confronting him. World is watching.

Like the Tamils, Muslims are also living in a state of fear. True, their own leadership let them down, and it should bear most of the responsibility and blame for the community’s tragic plight. However, there are sinister elements operating outside the community that are hell bent in preventing Muslims from re-emerging as a critical cog in the nation’s wheel of development and progress.

Some of those elements were openly working to garner support among Sinhalese Buddhists to enable the GR’s victory.

These elements are still continuing to advocate an anti-Muslim phobia.

There are, no doubt, some serious problems within the Muslim community that need be addressed with urgency. Reforms are needed in several fronts, such as secular and religious education, marriage and divorce, culture and aesthetics and so on. Undertaking that reformation demands a new and visionary but patriotic leadership, which has to come from within and not pushed from without.

The Muslim community has changed a lot over the last few decades, thanks to the work of an earlier generation of dedicated leaders.

On the positive side, there is a new class of young professionals, and rational intelligentsia, consisting of both men and women, who have the potential to join hands with similar groups from other communities and lead Muslims in a new direction.

In the meantime, it is the task of the new president to do everything within his power to eliminate the menacing anti-Muslim phobia. Will he have the fortitude to resist pressures from this mafia?

In this regard, there is one lesson that the President GR may learn from Lee Kwan Yew, an authoritarian Prime Minister. Following Sri Lanka and Malaysia in the sixties, linguistic nationalism began to show its ugly head in Singapore where the majority Chinese agitated for Mandarin to be made the official language. Lee had the guts to say no to this demand in the interest of a united and democratic but plural Singapore. Rest is history.

Sri Lankans must accept GR’s victory and should lend support to his policies as long as those policies do not impinge upon people’s democratic rights and freedom, and do not push ethnic minorities to become second class citizens.

The only way to guarantee that is to work for a strong parliamentary opposition in the forthcoming General Election.