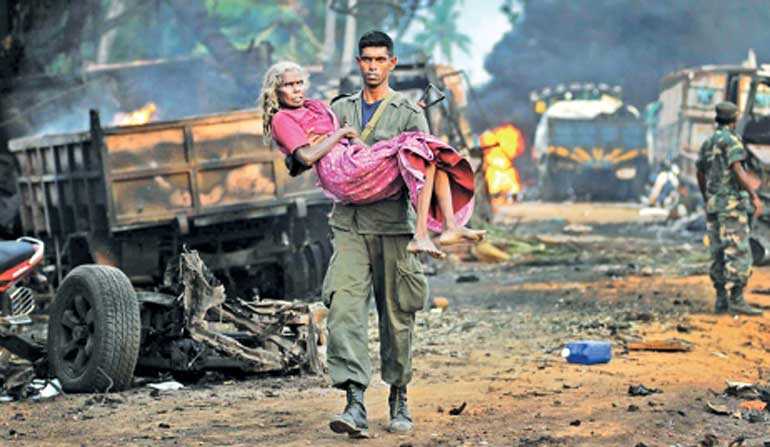 If all are thinking of eliminating terrorism by force with an authoritative regime without addressing root causes, God bless Sri Lanka

Terrorism has come back to Sri Lanka. Our motherland faced three insurrections after independence and there were several communal and religious clashes among different ethnic and religious groups.

As a nation we have failed to explore the root causes of these ethnic and religious clashes and insurrections. Instead, we have done our best to control the effects. In certain instances, we were successful and in certain instances we have failed. The effects can be controlled in the short run but in the long run the root causes should be eliminated.

The main cause of the two insurrections of Janatha Vimukthi Peramuna (JVP) was social injustice and resistance to an authoritarian rule. If there was social justice, it would have been very hard for those leaders to attract the young.

Soon after the second insurrection of JVP, then President R. Premadasa appointed a commission to investigate the reasons for the insurrection. One of the recommendations of the commission was that to give the suitable posts to the deserved. Premadasa took action and reintroduced the central clerical examination and stopped the practice of giving political appointments. That decision was reversed thereafter.

Before the end of the civil war in 2009 leaders of this country were discussing about a federal Constitution. Soon after the end of the war there were promises to implement 13+. What was meant was to introduce an entity such as a second chamber in addition to the full implementation of the provisions in 13th Amendment to the Constitution. Very little number of Recommendations of Lessons Learnt and Reconciliation Commission were implemented.

Reasons for the insurrections

There were arguments that the reasons for these insurrections were lying with the rebels themselves. It was argued that the first JVP insurrection was a result of the introduction of the Marxist movement in Sri Lanka and what JVP did was to implement the theory.

In 1971 unemployment rate in Sri Lanka was around 20%. On top of that rural youth was treated shabbily. That environment created a good breeding ground for JVP cadres. It was argued that JVP has taken an opportunist move by embracing nationalism, to say exactly racism.

Lionel Bopage was advocating a link with the Tamil rebellions and he accepted democratic right of Tamils to determine their own political destiny. Wijeweera and the others argued that the Tamil right to self-determination cannot be accepted since it was not in the proletarian interests of Sri Lanka and it will support the national bourgeois class.

In line of the thinking of Wijeweera in the politics in Sri Lanka after the 1980s the traditional Marxist class divisions disappeared and rude racism came into force. When Deshapremi Janatha Viyaparaya (DJV) came into operation new cadres may have been influenced by so-called patriotism in light of the presence of Indian forces in Sri Lanka.

However authoritative Government of Jayewardene paved the way for this insurrection by unjustifiably prohibiting the party and forcing them to go underground. Then Government was so undemocratic and authoritative that a person with a rebellious mind may tend to take arms against them if the opportunity was there.

Tamil separatism was officially born when Tamil United Liberation Front accepted the Vaddukoddai Resolution calling for the creation of Tamil Eelam, a separate Tamil state on 14 May 1976. There were arguments that this was the point the start of Tamil militancy.

It should be noted that the country has only the Indo-Lanka agreement, which was signed by the will of one person with the opposition of whole country and his party stalwarts, as a solution offered to the ethnic problem of the country.

As a result of the agreement the 13th Amendment to the Constitution was passed. Therefore, one cannot blame Tamils for starting the insurrection since there were sufficient grounds created by the successive governments for that. It should also be noted that adverse political relationship between the Indian Government and Jayewardene Government of Sri Lanka contributed to the escalation of the rebellion movement.

Muslims were attacked by the LTTE during the time of civil war and they were ordered to leave the LTTE controlled areas within 24 hours. Wahhabism promoted by Saudi Arabia infiltrated Sri Lanka some time back. There was a cultural change of the Muslim community and they have started to move towards an Arabian outlook.

Quite in contrast the Christian churches in Sri Lanka over a period moved towards the domestic Sri Lankan culture. There were organised attacks against the Muslim community in Aluthgama, Gintota, Ampara, Digana and recently in North Western Province.

Most of the attacks were economic targets. There was evidence that armed forces also supported these attacks by becoming passive observers. No action was taken. In recent attacks it is being repeated. On the other hand, there is a resistance for the extremist forces within the Muslim community and they have informed the authorities about the extremists and no action was taken.

As a nation what we are doing is making a conducive environment for breeding of terrorists. The Sri Lankan state is not neutral. It is biased towards the majority and the affluent. In communal clashes in 1958 Prime Minister Bandaranaike was a mere spectator. Governor General Oliver Goonetilleke took control and gave orders fearlessly against the culprits.

In 1983 J.R. Jayewardene did the same thing what Bandaranaike did in 1958. Unfortunately, there was not one above him to take control. If one is so timid what is the point of being a Head of the State? Mahinda Rajapaksa did not practice his authoritarianism against the culprits of the communal violence. The leaders of the present Government also followed their predecessors.

Democracy we enjoy today is not a true democracy but a dictatorship of the majority in relation to minority rights. In a real democracy, view of the majority is implemented while recognising the rights of the minorities. We never enjoyed this type of democracy in Sri Lanka. Now many demand an authoritarianism once again.

Authoritarianism will control the effects and not the root causes. Reconciliation/coexistence and authoritarianism do not go hand-in-hand. When there is reconciliation and coexistence there is no room for terrorism to emerge. Unfortunately, we were creating that room even during the present regime. As a nation we should have a dialog with the members of all the ethnicities, religions and social groups.

This is what the Director General of the National Security Think Tank operating under the Ministry of Defence of Sri Lanka says. “Certain liberal values introduced by the present Government made our nation vulnerable and a soft target for terrorist to breed and function. What was seen by the West as an autocratic state under Rajapaksa was reset overnight, tagging Sri Lanka to a global liberal order. This was done at the expense of an ensured demilitarisation and the complete dismantling and weakening of the country’s military apparatus. It brought prosperity to individuals without understanding the setbacks of liberalism. The principal of liberalism was confused with nationalism. Some policymakers saw one against the other to push agendas forward.” (Daily Mirror – 10 May)

The important point is that the Director General blames the liberalisation and although he did not mention the word democratisation the meaning of the paragraph suggests he blames that as well. He clearly promotes autocratic state. He hides the inefficiency and the negligence of the President.

If all are thinking of eliminating terrorism by force with an authoritative regime without addressing root causes, God bless Sri Lanka.