Students do not like to go to school. Ask the average parent whether their child, if given a choice, would rather go to school or stay at home. The answer is straightforward. So, what seems to be the problem in the school system that children loathe?

Are teachers not teaching effectively?

Are the subjects boring to listen to?

We could easily think that the above are all part of the problem of our current education system. Some like John Holt would rather close down schools altogether than send their children to such a place. Maybe we are not asking the questions the right way.

Why is it that students of varying backgrounds who grasp varying subjects differently thought at the same pace?

Why is it that we treat children like prisoners? Why don’t we trust our students to be good by nature?

Looking at these given problems, we can better understand the problem at hand and actually try to find a solution rather than always talk of a need for a better education system and not actually think to create one.

The first mistake we do when we admit a child to a school is put him/her to the same class as everyone else with the same age. Age is the easiest way to segregate the children. It’s easy for the school to take in students and easy for the parents since they know by age, when they need to admit the child. What happens after? From day 1, all students of the same age are taught the same thing, whether they are interested in what is taught or not. Once they reach the end of grade 1, whether they are good in all subjects/disciplines or not, as long as majority of subjects are fair, they are then passed to the next grade. 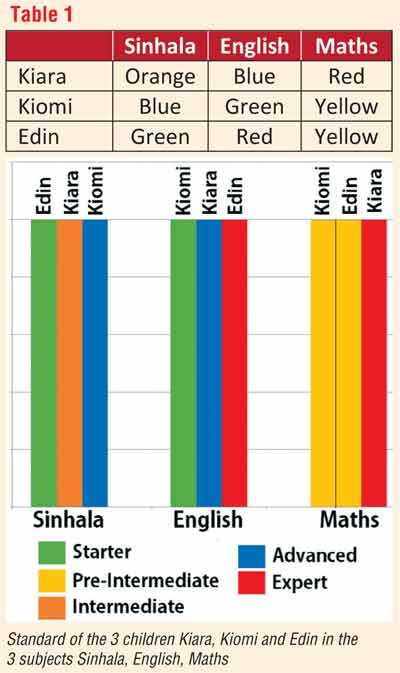 A child who is weak in Mathematics but good in their mother tongue Sinhala might be passed to the next grade. Another child who is excellent in Mathematics but poor in Sinhala language might also be passed to the next grade. What happens next? Both of them are taught a more advanced level of the different subjects. What impact does this make on the child who is weak in the areas mentioned? Do they automatically improve just because they have been promoted to the new grade? Hardly. They become weaker and would need extra attention. Do they get this attention in school environment? Hardly. What then? The parents would be told of this (if they are lucky, else neglected) and they would swiftly find a ‘tuition’ teacher to get the child up-to speed. This means, time that is allocated for the child’s playtime gets cut off. A weak child in class will then only slow down the method of teaching for the teacher. This would mean that even though there are 18 students in the class, the teacher is only teaching to about seven to eight of them. Does this make any sense? If the other students are removed from this class, then it would be ideal for the teacher to teach to such a low number of students in the classroom. But that would be wrong since we can’t just get rid of the weak students from the classroom, right? Since the child is actually good in another subject further complicates the situation.

How can we really solve this without having to send the weak student to after-school classes? Maybe the system of putting students to ‘Grades’ might not be the ideal framework for an education system.

What if we have the students separated according to the ‘knowledge’ they have of each subject? It is most practical to do this at the start of school admission; otherwise the students would feel inferior if they are changed from Grade system to Subject Level system.

How would this work?

Based on an initial assessment of each child who is admitted, they could be put into levels for each subject or learning area. This would be known as Individual Student Incorporated Schooling, ISIS for short.

The levels could be defined in colour so that the student would not feel inferior to another (since we would not need to use words such as ‘beginner, intermediate, advanced, etc..’) Only the teachers would know the colour system and its knowledge level.

Let us take three children to illustrate the effectiveness of this system. Kiara, Edin and Kiomi are of similar age but coming from varying background. Kiara comes from a family that speaks both Sinhala and English. Edin comes from an English speaking family. Kiomi comes from a Sinhala speaking family. Kiara and Edin are both good in English for their age and can easily identify letters of the English alphabet and speak English confidently. However, Edin is not good in Sinhala and is poor in recognizing Sinhala letters or speaking Sinhala confidently.

Kiomi on the other hand is opposite to Edin. She can identify letters in Sinhala and speak confidently but is shy in talking in English or identifying letters.

Kiara is in-between when it comes to Sinhala. She is weaker than Kiomi but better than Edin.

How could they be taught differently to suit their strength if all three are put into the same class? It would be a failure on all parts.

Hence, from the gathered knowledge of the strengths and weaknesses of these three children, the head teacher could place the three children into the classes shown in table 1 for the respective subjects.

In this way, Kiara could learn the three subjects in the pace that she deserves along with other children with similar level of knowledge of the subject. Same goes for Kiomi and Edin. They get to go to the other levels only once they achieve the standard required.

This would mean that the child’s boredom would be reduced (eliminating boredom altogether cannot be done with the current teaching methodology in existence) since the lesson is something that is understandable and keeps the child active.

One might argue that the colour separation would be understood by the students and cause inferiority complex. Yes, to a certain extent, but this would also encourage the student to perform and better their standards rather than be weak in a class and be subject to ridicule by teachers when homework and class questions go unanswered.

(Fernando is an author of 25+ ICT books and founder of GTS, an educational game production company. He is currently reading for his PhD at General Sir John Kotelawala Defence University focusing on the thesis area of ‘creating a new education paradigm for Sri Lankan primary education system’. He can be contacted via gihangamos@gmail.com.)