Home / Columnists/ Does legality matter at all?

Does legality matter at all? 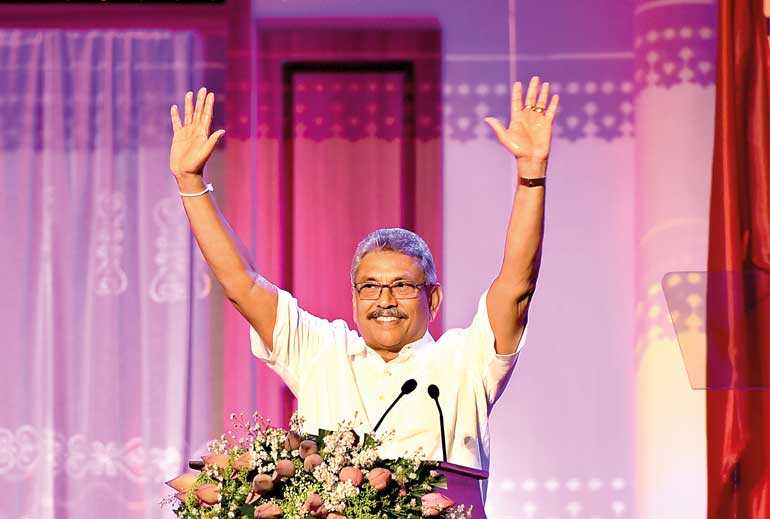 Some newspaper headlines notwithstanding, any illegality is soon mired in piles of legal red tape in the matter of appeals, counter-appeals and counter-counter appeals ad infinitum till ‘how it all began’ is lost in the cloud of bureaucratic wrangling

There has been a recent flurry of media attention paid to the potential candidacy of Gotabaya Rajapaksa as the candidate of the Pohottuwa group at the next Presidential Election.

While his is obviously a very well-financed campaign if the demonstrations of support that have been organised for him all over the country are anything to go by, I am somewhat bemused at the fact that, most recently, a journalist who could hardly be characterised as anti-Rajapaksa has produced what amounts to irrefutable proof that the aforementioned Rajapaksa is still a citizen of the Excited States of Amnesia, familiarly known as the USA, and cannot, therefore, run for elected office in Sri Lanka.

That in fact, is what D.B.S. Jeyaraj has to say in his understated description of the status quo and D.B.S.J. can hardly be described as a practitioner of yellow journalism. In fact, it has been very evident that he has stepped very gingerly on the turf around Sri Lanka’s Royal Family for quite a while now.

Given the consistent conduct of affairs in Sri Lanka, does it matter what the law says when what is emerging is the simple reality of ‘might is right’ and ‘the golden rule is that he who holds the gold makes the rules’? Do the established precedents suggest otherwise?

Some newspaper headlines notwithstanding, any illegality is soon mired in piles of legal red tape in the matter of appeals, counter-appeals and counter-counter appeals ad infinitum till ‘how it all began’ is lost in the cloud of bureaucratic wrangling.

If one were to examine headline-fetching events of recent origin, the fact that this is no exaggeration will be clearly borne out. In these circumstances, it is well within the realm of reality that someone who is disqualified from doing so, will run for the highest office in this land, be elected and proceed to exercise the prerogatives previously available only to oppressive monarchs.

In the matter of the administration of justice being fogged by bureaucratic manipulation, take the case of the Muslim doctor recently accused of performing mass sterilisation of Sinhala women. I challenge anyone reading this piece to accurately describe where on earth that whole business is now.

Has the fabricated ‘evidence’ been thrown out, is the doctor on the way to obtaining some form of compensation from those who have, literally, destroyed him, his fellow-doctor wife and their family? Or are they all in collective limbo?

I suppose a typical response by the current leadership of this country could well be, “His is not the only case of a Muslim persecuted for the religious beliefs he holds”, much as Ahimsa Wickrematunge was told when she inquired as to the status quo of the investigation into her late father’s execution that his (Lasantha Wickrematunge’s) was not the only one of its kind in Sri Lanka.

The simple recounting of the sequence of events in this saga of citizenship relevant to the election to the highest political office in the land, backed up by copies of all the relevant US documents would make shocking reading in any other jurisdiction but the ‘cradle of Sinhala Buddhist civilisation’.

However, as they used to say in another part of the world, “Give your head a shake, buddy”, and wake up to the cruel reality of present-day Sri Lanka, well on its way to becoming the epitome of a nation pretending to be a practicing democracy while ignoring the basic precepts of that philosophy of governance.

And that’s saying something in a world dominated by the likes of Trump, Putin and, now, Boris Johnson.

Much as it might seem like “… (breaking wind) against thunder”, remember that those who mounted the campaign to rid Sri Lanka of its last murderous regime were accused of unprecedentedly Quixotic conduct.

Nevertheless, they led a movement that succeeded. It was thanks to their efforts that there have been  no white van disappearances, tortures and deaths of rugby players, instances of unpunished third-degree assaults on journalists and brutalities of other kinds, too numerous to mention, on those that were seen as ‘enemies’.

All of the highly skilled and principled women journalists who spearheaded the campaign to rid this nation of those who opted to rule by violence have begun to re-emerge in our hour of need is pretty well.

Particularly given current circumstances, there is no alternative but to give them as much support as is humanly possible in yet another campaign to retain what little democracy we have regained in the governance of our affairs and try to build on it, preventing a return of murder and mayhem as the means of conducting the affairs of this nation. Nothing less will suffice.