Whoever wins at the forthcoming Presidential Election, the final results will have huge implication for the parliamentary election that would follow at the end of this year. Although it is pointless to predict even before the nominations are closed, it appears that the frontrunners are going to be the two candidates, Sajith Premadasa (SP) from UNP – with or without the support of SLFP rump under Maithripala Sirisena (MS) – and Gotabaya Rajapaksa (GR) from SLPP – with or without the same.

JVP, unless it can capture at least 15% of the Sinhala Buddhist vote bank while the minorities vote for its nominee Anura Kumara Dissanayake (AKD) en masse, which seems to be the most sensible thing for them to do for reasons explained below, will run third.

Yet, how close would be the difference in votes gathered by each of them would be crucial in determining the composition of the next parliament. The outcome of the Elpitiya Provincial Council Election on 11 October may be an indicator to the outcome in the presidential race. 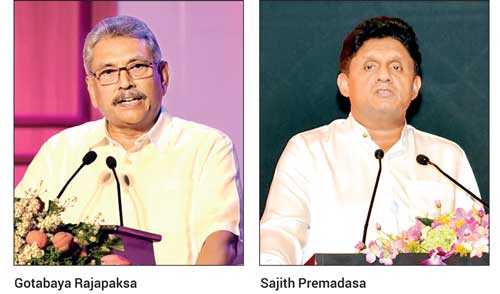 Of the three candidates, SP is pitching himself as the champion of the poor and downtrodden, and, without abolishing the executive presidency, which has already lost some of its powers under the 19th amendment, is promising to solve the Tamil issue through ‘maximum’ devolution of power to the north and east, but within a unitary state. Yet, he is not prepared to concede anything in writing to TNA whose support he desperately needs. SLMC, the Muslim ethnic party has already surrendered unconditionally to the UNP.

Social justice and economic welfare are commendable objectives and urgently needed at a time when the gap between the haves and have nots is yawning. However, those objectives should be achieved not simply by redistributing existing wealth, which has its own ceiling, but more profitably by increasing the quantum of national wealth itself. This requires sustained and robust economic growth.

There is no indication so far as to how SP going to achieve this growth given the continuing global economic uncertainties on the one hand, and without eradicating the cancer of systemic corruption, introducing structural changes to the economy and, above all, solving the ‘national problem’. Future peace and prosperity of Sri Lanka depends fundamentally and crucially in finding solution to the last issue.

As for devolution of power, SP’s biggest hurdle will be to overcome the opposition from Buddhist supremacists who, with their support base in the Sangha, are not prepared to concede any power to the minorities. The secretary monk of BBS, the most aggressive supremacist organisation yet has repeatedly declared that Sri Lanka belongs to Sinhala Buddhists only and that others, if they do not want to accept that position, should pack up and leave.

One Buddhist minister who dared to repudiate that monk has been ostracised by the Sangha. Even now, neither the UNP nor SLPP nor SLFP has said or done anything to check or condemn any of the provocative and violent actions of BBS led supremacists. Their latest chutzpah to cremate the corpse of a Bhikku in the precincts of a Hindu temple at Mullaitivu, and in total disobedience to a court order preventing it, went with the silent nod from these political parties.

The fact that neither of the two leading presidential candidates have so far condemned this incident speaks volumes about their collusion with the supremacists. Incidentally, it may be to appease the supremacists that SP has prioritised building 1,000 Buddhist chaityas and not even one Christian church, Hindu temple or mosque. This is a dangerous current and unless it is checked the nation will remain tumultuous with all its negative consequences politically, economically and socially.

GR’s main campaign platform is national security and non-aligned foreign policy to protect the nation’s sovereignty. The fact that he was the Secretary of Defence under his brother’s presidency and that it was that regime which mortgaged the Hambantota Harbour to the Chinese, provoking India and US to demand similar mortgages to counterbalance China’s foothold, has compelled GR to declare non-alignment.

This is empty bravura not simply because Sri Lanka’s sovereignty has already been compromised in the face of competing pressures from the Chinese and Indian governments over foreign and even domestic policy matters, but more importantly because the meaning and substance of sovereignty has transformed radically in the New World Order. Sovereignty today is not the absolute sovereignty of the Westphalian nation state but a more diluted one subject to a number of international agreements and controls.

The issue of national security received increased focus in the wake of the Easter bombings carried out by a bunch of Muslim terrorists. Here again, the fact that GR was one of the heroes if not the hero who won the war against LTTE has qualified him to champion this cause.

However, one should distinguish between providing security in the face of foreign threats on the one hand and domestic threats on the other. Having dragged the country into the vortex of a regional power struggle in the Indian Ocean between China and India, which has also brought the US in between, any source of external threat would probably arise from that quarter, and in case of a hot war among them Sri Lankan defence forces would count zero against the might of those giants.  Therefore, the issue of security is mainly about preventing domestic threats, and the Easter massacre made it a priority issue. However, one should realise that home grown terrorism cannot be eradicated by military means alone. Without addressing the root causes of terrorism, the war against terrorism cannot be won. Has the military annihilation of LTTE terrorists for example, removed the causes that led to the rise of LTTE? Certainly not.

Similarly, had prompt action been taken to punish those who spread anti-Muslim hatred and perpetrated violence against that community after 2009, it is doubtful whether the Easter infamy would have occurred. Spread of Wahhabism and inspiration from and training by extremist groups like ISIS are, though relevant, yet not sufficient reasons to explain the whole story behind that massacre.

To ignore the anti-Muslim provocations of Buddhist supremacists, their campaign of Islamophobia since 2009, and the tolerance they enjoyed from State authorities, is to disregard the fundamental causes of that infamy. Those causes are still prevalent. It is a pity that GR has not said anything so far about reining in the supremacists and allaying the fears of Muslims as well as Tamils.

Whereas, it is intriguing to hear Wimal Weerawansa M. P and supporter of GR urging Muslims to vote for GR if they wish to live peacefully in this country. Did he imply that GR was also behind the anti-Muslim violence unleashed by BBS, and therefore that he is the man to control the supremacists? If that is the case, let him learn a lesson or two from the life of SWRD.

Recently BBS has formed an alliance with another supremacist group, Dharmapala Parapura (DP) or Generation of Dharmapala with the intention of fielding candidates at the next General Elections. DP is named after the national hero, Anagarika Dharmapala, who in the years leading to the 1915 Sinhala-Muslim riots ignored the distinction between the Indian Moors of the plantation era, who were simply birds of passage, and the millennium old indigenised Ceylon Moors rooted in the country’s soil. He lumped both groups together and called them and the ruling British aliens.

Following his footsteps BBS, DP and other such supremacist blocs are now calling the Muslims aliens. There is a contextual difference between the two usages. Dharmapala was blinded by his thirst for national awakening and independence, and he later regretted his mistake and went on to praise the local Muslims for their entrepreneurship and hard-working qualities. He was an ardent nationalist and not a rabid supremacist like today’s BBS, DP and others.

Anagarika Dharmapala was a devout Buddhist, but never advocated that Buddhists should go and convert a Hindu temple into a vihare. One should not prostitute the name of this nationalist and hero and twist facts to gain political mileage.

The time has come for the frontrunners in the presidential race to come clean about their attitude and policy towards the supremacists. So far, only AKD has distanced himself from this crowd. This is why the minorities, victims of BBS malevolence, have to reconsider their traditional voting pattern in the future elections.  Majority Muslims, until Badiuddin Mahmud came to the scene identified the colour green as colour of Islam and made it a habit to vote for the UNP. (Incidentally, SLMC’s ensign is also green). Badi and his Islamic Socialist Front pulled a substantial section of those voters away from greenish UNP towards blueish SLFP.

Today, the SLFP is a dead force and UNP and SLPP are in bed with saffron supremacists. Should the Muslims vote for their candidates or go reddish and choose JVP? Similarly, the Tamils, except for a small minority, habitually went after their own ethnic leaders and rejected the progressives from their own community as well as from others. Their alliance with UNP in 2015 brought nothing but disappointment. GR has already said that what the Tamils need is a package deal for development and not power sharing. Will they make their choice on the principle of choosing the lesser of the evils? Even so AKD seems to be the least evilly.

Irrespective of who wins the presidency the greatest danger that the country is facing comes from the supremacists. Unless the new president and the next government find a permanent solution to the ethnic and religious tensions that bedevilled this nation for the last 70-odd years no economic recovery and growth can be sustained. It is heartening to see the country’s economists are now prioritising this issue in their analyses. The supremacist genie has to be bottled. Who will do it?