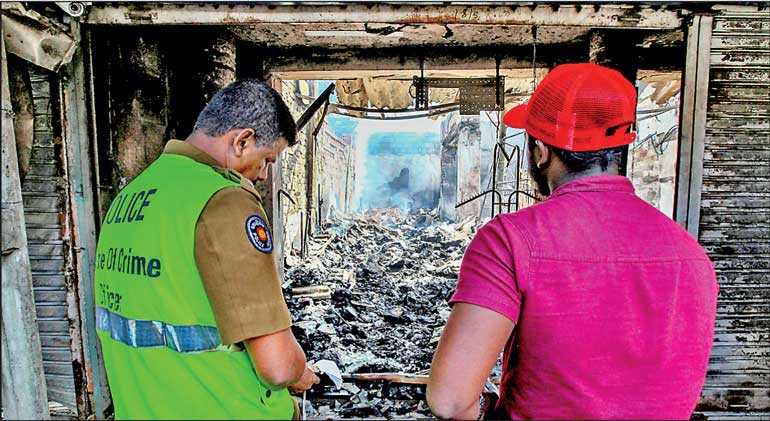 Ethnic divisions continue to be expressed in Sri Lanka. These divisions, as we have said, have been influenced by politics and intellectual elites who often dig into the material of history to draw the poison of hatred – Pic by Chamila Karunarathne

Modern world is full of multidimensional and multidisciplinary conflicts involving use of physical and psychological violent tools. The panacea for conflict resolution requires revivalist research in the mind of an individual and physical outburst is only subsequent expression of this conflict. Individually and

collectively it takes form of individual violent action, economic conflicts and conflicts between religions and communities.

Cultures are enriched not only by the works of its creative geniuses, but when they also absorb values from other cultures. Take a look at the universe, this world is like a rainbow, a flower garden, each providing a tribe, religion, race, language, traditions and communities – wide and varied colourful cultures. The differences make this life more beautiful. What would happen if the earth only contains black or white only? Rainbow with one colour. Flower gardens with one kind of flower. Only one type of flock of birds with just one colour – how utterly boring it would be!

We human beings constitute all the colours of life and we live together in harmony to make this world more beautiful and give happiness to everyone. Just as the refraction of white light, resolving it into its component colours: Violet, Indigo, Blue Green Yellow, Orange and Red – the colours of the rainbow. It is the interaction of the light from the sun, the fauna and flora that has made the planet Earth a beautiful place to live in and life has flourished on the planet.

Similarly, there are societies where some cultures interact. There are multicultural and intercultural societies. It is such interactions that have made mankind prosper together with the interactions with the fauna and flora.

We can see interactions of all communities in Sri Lanka at the time of their colourful festivals and festivities – many festivals have religious origins and entwine cultural and religious significance in traditional activities – Sinhala and Tamil New Year, Vesak, Christmas and New Year, Diwali and Eid Festivals including harvest festivals celebrating seasonal change. The Buddhist, the Christian, the Hindu and the Muslim, how they interact on their festival days with members of the other community, in Sri Lanka it is legendary, with the exception of very few having extremist notions, who are nothing but a minority of minorities, despised by all.

This is also evidenced by the long-standing practice in Sri Lanka, where whenever political elites fail to meet citizens’ expectations for economic well-being, they create problems of an inter-ethnic nature and thus, distract citizens’ attention from the existential problems. The political authorities, when at times distressed by the various affairs, they play with this dangerous fire and they caused the emergence and role of racial conflict and its stifling impact on national development in Sri Lanka, which represents an extreme case of a society plagued by racial division.

They usually, have also been supported by dominant intellectual elites and politically controlled media, in spreading inter-ethnic fear and intolerance. In our beautiful land, there are decades of talk about creating a multi-ethnic society but in practice there are these political elites that have influenced ethnic segregation.

Sri Lanka functions as a kind of multicultural society, but not an intercultural one.

Ethnic divisions continue to be expressed in Sri Lanka. These divisions, as we have said, have been influenced by politics and intellectual elites who often dig into the material of history to draw the poison of hatred. However, history provides numerous examples of interethnic solidarity.

Politicians often adulterate their vociferous, vitriolic speeches with xenophobic discourses. Xenophobia is the fear or hatred of that which is perceived to be foreign or strange, having or showing a dislike of or prejudice against people from other countries. Xenophobia is harmful for any cultural system. Xenophobes are the biggest enemies of their cultural systems because they oppose cultural openness and interaction. 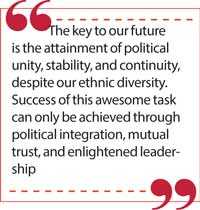 Particularly in multicultural societies like ours, which are by definition heterogeneous, dynamic, unstable and costly. When dialogue, communication and democratic relations between different ethnic groups are lacking, society is at risk of conflict. Maintaining internal stability in the ethnic context is conditioned not only by the quality of laws, but also by their implementation in practice. Laws should guarantee the ethnic and cultural rights of all nations living there, without violating the individual rights. In multicultural societies a permanent investment is required in respecting cultural, national or religious differences. Such differences should be recognised as wealth of a nation.

Ethnocentric tendencies affect inter-ethnic cohesion and create cracks in the pillars that guard the stability of society. These pillars are strong when individual, cultural and national rights are guaranteed to every citizen; when a free space is created for affirming collective and individual identities; when cultural, national or religious differences are characterised as advantage and not as a risk.

The key to our future

The key to our future is the attainment of political unity, stability, and continuity, despite our ethnic diversity. Success of this awesome task can only be achieved through political integration, mutual trust, and enlightened leadership.

Economic competition precipitates ethnic tension because state leaders and political parties use and abuse ethnic identity and racial and religious difference as a means to mobilise support. Ethnic conflicts also emerge due to forms of economic development determined mainly by government policies advanced by politicians whose ultimate agenda is not necessarily the promotion of the national interest.

This is a brief analysis of comparative politics in multi-ethnic societies. As a consequence of their differences in historical experiences, social cohesion, political, economic, and psychological development, are at different stages in our internal political integration and our domestic level of mutual trust. These differences are the most distinguishing characteristics and should profoundly influence the development of our political integration and the sense of trust among the diverse ethnicities in our populations.

Political integration and mutual trust are so intimately interwoven as to constitute the singular, most ambitious goal of any political community. Yet, the most difficult domestic problem that that we have had to face results from our ethnic diversity.

Because trust is the most essential ingredient in human relationships between individuals, religions, communities and the state.

The unspoken question is, “Can I trust you not to betray me?”