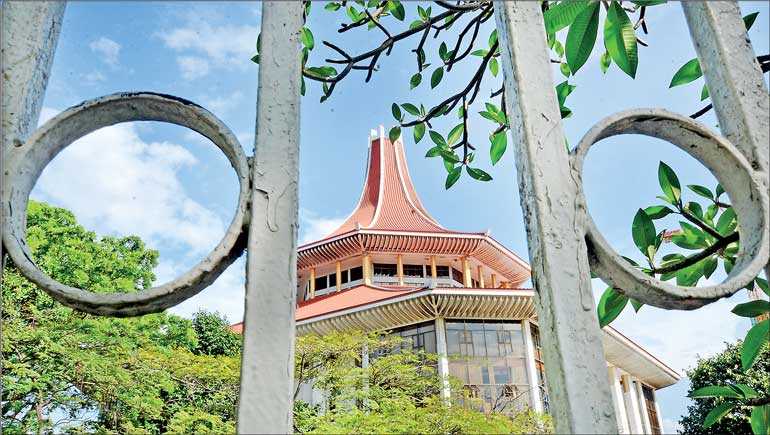 The High Court and District Court premises in Colombo were built about 300 years ago during the Dutch period, at Hulftsdorp which is named after the Dutch General Hulft who died in 1656 by a bullet, fired by a Portuguese soldier while besieging the Portuguese held Fort of Colombo.

These premises are of immense heritage value not only for its architectural history but also the legacy it carries of being the primary hub of dispensing justice in the capital city.

State of the premises and court houses

However, these premises have now attracted the public eye not for all its glory, but for the sad and pitiful state it has fallen into due to disrepair, dilapidation and neglect.

Just over two weeks ago, a part of the wooden ceiling in a High Court corridor fell apart amidst the torrential rain. Fortunately, no one was injured in that instance, but the security guard on duty close by, narrowly escaped being hit by a damaged ceiling sheet. There was another area of the District Court, where water came gushing down, more like a waterfall, obstructing both lawyers and litigants passing by.

These are just recent incidents which stand testimony to the crumbling nature of these premises in addition to all too visible and widespread damage and deterioration. Litigants, lawyers, judges and the court staff are not only witnesses to this on a daily basis, but are also vulnerable to the safety risks posed.

A problem not limited to Colombo

Though the court premises at Hulftsdrop have garnered public scrutiny recently, the said problems are not isolated or limited geographically to this location. As unfortunate as it is, we see, and we hear of similar tales in various other court complexes around the island.

The even more troubling situation is that some comparatively new court complexes too do not have the required infrastructure needs or have in a short time fallen into disrepair and dilapidation.

The lack of basic facilities

In addition to this sad state of affairs, another pressing concern is the lack of basic conveniences for all those who come to these courts.

In fact, recently, there was even a report of there being a court house where lawyers were compelled to conduct their consultations with clients under a tree.

Another area of concern is from the perspective of disabled persons; Article 12(1) of the Constitution provides that “All persons are equal before the Law and entitled to the equal protection of the Law”, subject to certain restrictions.

Courts are the primary means by which the judicial power of people is exercised. Therefore, it goes without saying that all persons subject to the law must have access and inclusivity at our court houses. However, I would like to pose the question, do most of our court houses have such facilities that provide access and inclusivity, in spite of the copious legal framework and the judgments by the apex court?

In the foregoing circumstances, key questions arise as to who is responsible for this state of affairs in our court houses and what steps have been taken in this regard?

The planning, development and administration of courts are directly under the purview of the Ministry of Justice and Prison Reforms. Only the Superior Courts Complex has semi autonomy given to it under the Superior Courts Complex Board of Management Act No. 50 of 1987, but the Board of Management is also reliant on grants made by the Ministry of Justice and Prison Reforms and budgetary allocations.

Expenditure towards the administration of courts

If one reads the Budget Estimates for 2019 by the Ministry of Finance along with the most recent Performance Report (2018) of the Ministry of Justice and Prison Reforms, it would appear that considerable efforts and expenditure have been incurred for the administration of courts.

The adequacy and effectiveness of the expenditure incurred

There can be no denial that some effort and expenditure has been incurred by the ministry to remedy the crumbling status of our court houses. However, what is vehemently questioned is the adequacy and effectiveness of the expenditure for the following reasons.

Firstly, it is pertinent to note that the courts themselves generate revenue to the State by means of court fines and court stamp duty. These are collected and remitted to the respective Provincial Councils. As the Budget estimates for 2019 indicate, the court fines alone for the year 2017 amounted to almost Rs. 2.8 billion. Similarly, a substantial revenue is generated by court stamp duty fees. It is not disputed that the total expenditure by the ministry for court administration exceeds the revenue generated by courts, yet unlike many other State establishments that rely on State funding without any revenue contribution in return, the courts do make this significant contribution of revenue to the State.

Secondly, the Ministry of Justice and Prison Reforms has embarked on a project to develop the BCC land adjacent to the Hulftsdorp Courts Complex and construct 40 courtrooms, with the plan to convert the present District Court and High Court Complex into a Museum. The present status of this project appears to be that a panel of experts comprising of architects, assessors, quantity surveyors, designers and engineers are due to be appointed in due course to evaluate the tenders and shortlist a set of investors for the final selection.

Deliberating on this, it would be apt to look at the comparative jurisdiction of Singapore and similar initiatives they have taken. Their grand old Supreme Court building which has a history longer than modern Singapore was converted as a National Gallery and is a major tourist attraction, and the Supreme Court of Singapore was relocated to a state of the art nine-story complex comprising of 14 civil courts, eight criminal courts and three appellate courts, and completed in 2006.

In addition, Singapore’s existing State Courts Complex which was built over 40 years ago has now been marked for conservation as it is considered that the said premises will be unable to meet the demands of the future with its existing facilities. Thus, for this purpose, they have commenced the construction of this complex to house an entirely new court complex which is now nearing completion.

In fact, it is going to be the tallest government structure in Singapore with 35 stories and three basement levels in two towers; and it is designed to house state-of-the-art facilities (including facilities to transcribe oral evidence in real time and interactive self-service kiosks on multiple floors for court users to get information and make their payments for bail, court fees or fines) and sustainable and environmentally friendly features.

Keeping this comparative contextual scenario in mind, we must commend the initiative of constructing a new court complex at the BCC land while planning to renovate the Hulftsdorp Courts premises as a museum. However, what is the status and progress of this proposed initiative? Will this complex be state-of-the-art, sustainable and future proof so as to make it a worthwhile investment? Is the postponement of renovations of the existing complex on the promise of a new complex a reasonable policy or is it fallacious?

Thirdly, even though many new court complexes have been opened in the recent past, they too have had many shortfalls in terms of infrastructure or have fallen into disrepair and dilapidation within a short span of time. This clearly indicates that there is either a lack of quality in planning, construction, supervision and administration of such court houses or there is a lack of funds to maintain the requisite quality and standards. Without these shortfalls being addressed immediately, the capital expenditure incurred is largely in vain in the long run.

Fourthly, a substantial renovation was commenced for the Superior Courts Complex in 2013, 25 years after its construction, but unfortunately only the roof and the ceremonial court were renovated by end 2014, and the remaining floors and court house are yet to be renovated.

Fifthly, we must always keep in mind that the sovereignty of the people is exercised through the three branches of the State: the Legislature, the Executive and the Judiciary, and one is not greater than the other. Neglecting the renovation and maintenance of court houses is in effect neglecting the Judiciary and the judicial power of the people, and this cannot be considered a trivial matter.

To put into context, not long ago, very swift action was taken to install 10 new elevators at the Parliament incurring a cost of around Rs. 100 million when there was a malfunction of an elevator. Unfortunately, we have not seen such swift action being taken in relation to the renovation and maintenance of our courts.

In these forgoing circumstances, it has become imperative that these issues are addressed expeditiously. The longer these issues remain unresolved, the greater the damage to the courts and our judiciary itself, which will also invariably impact on laws’ delays affecting the very people whose sovereignty is exercised and enjoyed through the courts.

It would appear that the current state of affairs is a result of the failures of successive governments in relation to addressing and finding solutions to these pressing issues, and it is incumbent on the officials, who hold office in trust for the people, to even at this belated stage step in and proactively take measures to alleviate the hardship faced by all concerned.

Any further failure by these officials to address these issues would likely end up in litigation, which is ideally best avoided for matters of this nature.

[Rajeev Amarasuriya is an Attorney-at-Law in active practice. He is a Fellow Member of the Chartered Institute of Management Accountants (CIMA – UK), and an Alumnus of both the Faculty of Law of the University of Colombo and the Harvard Kennedy School of Government, Executive Education.]