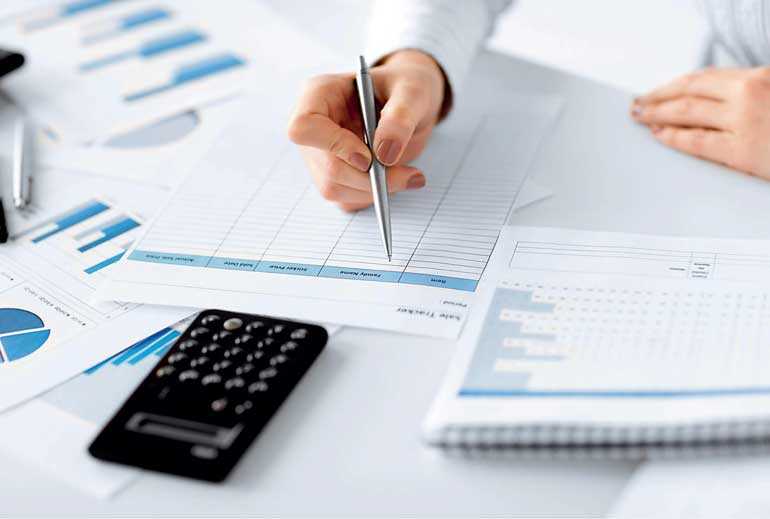 A comparison and analysing the impact of corresponding provisions of Companies Act No. 7 of 2007 and Inland Revenue Act No. 24 of 2017 reveals invaluable insights corporate management must be aware of in day-to-day management activities as well as strategic decision making.

In addition to corporate actions pertaining to capital structure such as declaring preference and ordinary dividends, capitalisation of profits, repurchase of shares, redemption of shares, reduction of capital, bonus shares, rights issues, share splits, consolidation of shares, etc., the two Acts have many other provisions that the interaction merits the focus by the corporate stakeholders.

The requirement to maintain records and accounts

LKAS 1 provides a list of financial statements a company must maintain.

A statement of changes in equity for the period

A statement of cash flows for the period

Comparative information prescribed by the standard.

The Inland Revenue Act 2017 also addresses record keeping and maintaining accounts but the focus is to ascertain the correct profit or loss from the business or investment activities of the taxpayer. The Income Tax Act also impose an obligation on Commissioner – General Inland Revenue Department to specify a system of simplified accounting system for small businesses notwithstanding any other provision in any other law.

It is a frequent observation that many companies become targets of the Inland Revenue Department due to the failure to maintain accounting records and information in the manner specified in the tax law. In order to comply with the provisions of the new Inland Revenue Act, the tax payers have to maintain many categories of record that is not apparent on a reading of the new Act. Thus the true compliance burden of the tax payers have undergone shift compared to requirements pertaining to maintaining records and accounts under the repealed Inland Revenue Act of 2006.

A Pre-incorporation contract is a contract entered into by on behalf of a company prior to its incorporation. Pennignton’s Company Law, Fourth Edition at page 88 points out that ‘a company cannot enter into a contract before it is incorporated because it does not yet exist as a legal person. Nor, for the same reason, is it bound by contracts made by agents purporting to act on its behalf before its incorporation’.

In the famous case of Kelner v Baxter decided in 1866 in UK, courts pointed out that a pre-incorporation contract that have been entered into by promoters of a hotel company to purchase of wine is binding on the promoters, rejecting the defence take-up by promoters that it was a contract entered on behalf of the company. Erie CJ pointed the following 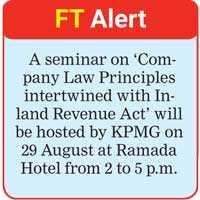 “I agree that if the Gravesend Royal Alexandra Hotel Company had been an existing company at this time, the persons who signed the agreement would have signed as agents of the company. But, as there was no company in existence at the time, the agreement would be wholly inoperative unless it were held to be binding on the defendants personally. The cases referred to in the course of the argument fully bear out the proposition that, where a contract is signed by one who professes to be signing “as agent,” but who has no principal existing at the time, and the contract would be altogether inoperative unless binding upon the person who signed it, he is bound thereby: and a stranger cannot by a subsequent ratification relieve him from that responsibility. When the company came afterwards into existence it was a totally new creature, having rights and obligations from that time, but no rights or obligations by reason of anything which might have been done before. … It was no doubt the notion of all the parties that success was certain: but the plaintiff parted with his stock upon the faith of the defendants’ engagement that the price agreed on should be paid on the day named. It cannot be supposed that he for a moment contemplated that the payment was to be contingent on the formation of the company…”

However the Companies Act of 2007 specifically permits ‘Notwithstanding anything to the contrary in any law, a pre-incorporation contract may be ratified within such period as may be specified in the contract or if no such period is specified, within a reasonable time after the incorporation of such company, in the name of which or on behalf of which it has been entered into.’

The concept of branch vs. permanent establishment

On the other hand the Inland Revenue law refers to the concept of Permanent Establishment. This refers to a company in outside Sri Lanka extending its business arm to the Sri Lankan soil. In some instances there could be an overlap between overseas company (branch) and a permanent establishment known to the tax law. 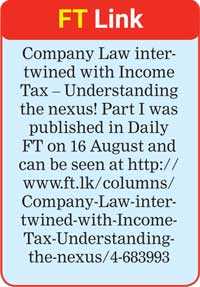 An analysis reveals that existence of an overseas company under the Companies Act does not necessarily result in the creation of a permanent establishment liable for tax in Sri Lanka and even without a registered overseas office in Sri Lanka, a company may still create a permanent establishment in terms of the Inland Revenue Act. An in-depth study of this issue is mandatory for achieving the tax efficiency.

Many are aware of the stringent liabilities imposed on the Directors by the Companies Act 2007. This includes liabilities when the company reaches insolvency, serious loss of capital, failure to comply with the Act and the company’s Articles, failure to act in good faith, failure of disclosure of interest, liability upon liquidation of the company, etc. As per the provisions of the new Inland Revenue Act, directors could be personally liable with regard to the taxes in default of the company as per the rules laid down in the Inland Revenue Act of 2017.

The new Inland Revenue Act 2017 has imposed clear and unequivocal personal liability on directors and other “managers” as defined with regard to the taxes in default of a company. A position that had room for challenge has now been closed under the new income tax regime.

Loans to and from directors and shareholders

A company obtains or give loans from financial institutions as well as from or to directors and shareholders; the latter being a common phenomenon in case of private companies. The repayment may be sans interest, with low or high interest. Companies Act 2007 contains rules and restrictions governing these common transactions.

The Inland Revenue Act of 2017 also plays a pivotal role in impacting these categories of transactions not merely restricted to the deductibility of interest from the point of view of the company. In addition to thin capitalisation rules, transfer pricing rules, withholding taxes, etc. may impact the parties to the transactions.

Under the new Inland Revenue Act income tax liabilities hitherto that did not exist are triggered upon a company that are liquidated.

The above issues are few of the many areas that will be deliberated at the seminar on ‘Company Law Principles intertwined with Inland Revenue Act’ hosted by KPMG on 29 August at Ramada Hotel from 2 to 5 p.m.