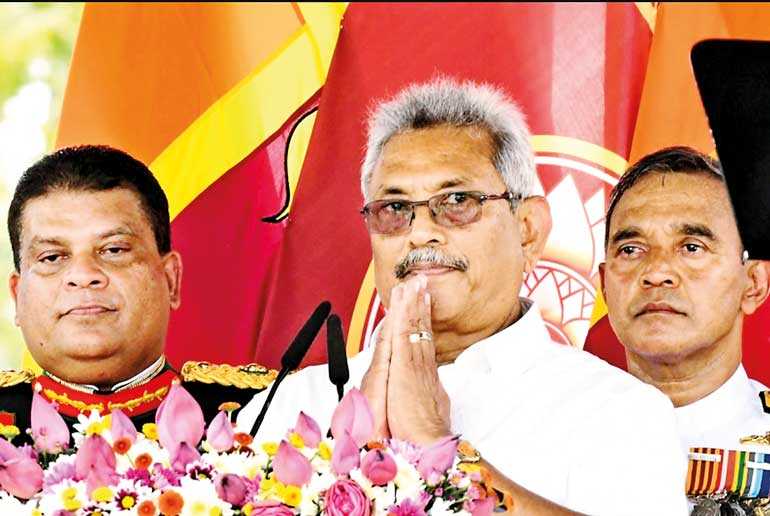 President Gotabaya Rajapaksa, who came to power promising a clean slate in governance and economic management, is still wedded to the same agenda. His policy of political exclusion and economic inclusion to the Tamil minority is an illustration of the supremacist agenda

In a few days, Sri Lanka will celebrate its 72nd year of independence from colonialism. But behind the pomp and pageant of that celebration is a sad reality of an autocatalytic process – a small initial event triggering a chain reaction that evolves on an ever faster and bigger scale – that deformed a vibrant popular democracy, in which all its constituent communities were considered to be of equal status and were reasonably well off when compared to many of her Asian neighbours at the time of independence, and transformed it into a supremacist authoritarian rule, in which except for the Sinhala majority, and within it the Buddhist chunk, the rest have been virtually reduced to second class citizens.

Along with this political descent was the systemic and systematic mismanagement of one of the most successful welfare states in Asia, which has now become so vulnerable to external pressures that the country’s independence itself is about to be mortgaged for economic survival. Sri Lanka today is a divided nation, economically debilitated and strategically cornered. The systematic erosion of the country’s democratic constitution and systemic mismanagement of its economy and resources have inevitably installed an authoritarian president, who, either through conviction or political necessity has not been able to free himself from the supremacist trap.

Authoritarianism had been the political superstructure on which economic power houses were built in South East Asia. The economic miracle of the Asian Tigers won unanimous admiration of all international economic managers and super powers, with little or muted criticism of the undemocratic politics behind that miracle. One common element of South East Asian authoritarianism and why it did not provoke open attack from the civilised world was that it was based on economic rationalism and not on religious zealotry or ethno-nationalism. This is not the case with President Gotabaya Rajapaksa’s authoritarianism. It is overwhelmingly biased towards achieving economic miracle on the back of Buddhist supremacy.

The initial trigger or the root cause of the autocatalytic decent from democracy to authoritarianism could be traced back to the supremacist philosophy championed by members of the Sangha right from the 1950s that Sri Lanka belongs only to the Sinhala Buddhists, that their ownership should be protected by every possible means, and in particular through the powers of the state. This supremacist idea, in a sense, originated as the natural outcome of nearly 450 years of colonial subjugation under Christian powers.

However, that ownership claim failed to recognise the historic legitimacy of the country’s co-owners. Through a chain of action and reaction therefore, the single ownership claimants set on a collision path with minorities that drained the nation’s plural democracy of its substance, delegitimised the indigenousness of national minorities, derailed the path to economic prosperity, and defamed the country’s reputation internationally.

From the passage of the controversial Ceylon Citizenship Act No. 18 of 1948, to a planned dismantling of all safeguards to minorities enshrined in the Soulbury Constitution, and through electoral gerrymandering, constitutional making, unmaking and remaking, and economic, educational and social discrimination, the domineering power and status of the Buddhist majority were brazenly entrenched. It was this entrenchment of supremacy on behalf of a dominant group in a plural polity that began the autocatalytic process, which manifested, among other evils, in cycles of inter-communal violence from 1950s to 1980s, a 30-year civil war till 2009 and a major act of terrorism in 2019.

As long as the idea of a single group supremacy is allowed to prevail in state management there is no guaranty that the autocatalytic process would wind back or dissipate. Alternatively, to depend on security forces to reverse that process, would not only be un-affordably expensive given the poor state of the economy, but may even perversely bring about a police state, which is worse than authoritarian democracy.

The supremacy-driven catalysis has drained the nation’s democracy of its substance. If peaceful transfer of power through periodic parliamentary elections is the only test of meaningful democracy, then Sri Lanka would pass that test with flying colours. Except for a coup attempt in 1962 and two JVP insurrections in 1971 and 1983 all of which failed abysmally, political power was always transferred from one regime to another through the ballot box. However, democracy is a lot more than regular elections and change of regimes. One of the most important ingredients of a successful democracy is de jure political equality without being undermined by de facto economic and social equality. This is particularly important in a plural polity like Sri Lanka.

The unconditional surrender to the supremacist agenda by all national parties, with the exception of traditional left, has hollowed out democracy of its true meaning while preserving the carapace of periodic elections. To translate the supremacist idea into reality affirmative actions by governments were needed to provide a head start to certain sections within the majority community that lagged behind the others due to uneven development under colonialism.

Had there been a set time limit and strict monitoring of progress for those actions hardly any would have reacted adversely against such measures. But preferential treatment became a permanent feature under all governments. As a result, meritocracy, efficiency, accountability, transparency and such other requirements of good governance were sacrificed in favour of discrimination, nepotism, corruption and other corrosive evils that cumulatively led to public sector mismanagement, administrative inefficiency and economic debility.

Actions triggered by the supremacist agenda and legitimised by successive governments made reaction by affected groups criminal and deemed even unpatriotic. Thus began the autocatalytic process which over the last 70 plus years drained democracy of its substance, divided the nation, enfeebled its economy and jeopardised Sri Lanka’s long term stability and international standing. The communal riots, the civil war, acts of terrorism and all such ruinous occurrence germinated from the supremacist agenda.

Although for over 60 years that agenda had been in operation from within the confines of the parliament, it was only after the end of the civil war in 2009 that it became a propaganda weapon in the hands of militant Buddhists, including members from the Sangha. Supremacy at any cost seems to be their goal, and any weapon to achieve it seems justifiable in their view. The way this propaganda unfolded during the last presidential election and how that election divided the nation ethno-religiously is common knowledge.

When President Gotabaya Rajapaksa announced during his election campaign that he wanted to change the political culture of this country and bring about a meritocratic, technocratic and clean government, there was a sigh of relief and optimism at least among the educated class and civic activists that the autocatalytic process would slow down and may even be reversed.

Although it is too soon to pass any conclusive judgement on his presidency, one is able to witness already that features of ancient regime are quietly re-emerging. Nepotism in public appointments at higher levels, interference in judiciary, involuntary retirement of public officials, economic populism with disregard to its overall impact on the economy and with focus on victory at the next General Election, deployment of military forces throughout the country to prevent any violent reaction from the affected, and tolerance of excesses from supremacists, are signs of continuance and not change in the political culture as promised by President Gotabaya Rajapaksa.

In the meantime, international and regional pressures are mounting on Sri Lanka. Apart from the ballooning foreign debt and associated pressures from IMF and other lenders, USA initiated Millennium Challenge Corporation (MCC), Acquisition and Cross Service Agreement (ACSA) and Status of Forces Agreement (AOFA) are looming threats to the nation’s partially vacuous sovereignty. Behind the accusations and counter-accusations between the caretaker government and the opposition, is an inconvenient truth that it is a matter of time before US forces set foot on Sri Lankan soil.

Regionally also, neighbouring India’s latest Brahmos-armed Sukhois-30MKI fighter jets stationed in Tanjavur in South India has placed Sri Lanka within its Indian Ocean surveillance radar. India has determined to counter with US support, China’s Indian Ocean penetration via its twin strategy of One Road One Belt and String of Pearls. Amidst these developments, Sri Lanka’s posture of neutrality in foreign policy is increasingly becoming meaningless rhetoric. The country is pressured to make a choice between India and US on one hand and China on the other. Do the supremacists have an answer to this dilemma?

While the pressure of debt servicing does not show any sign of easing in the short or medium term, politically motivated economic measures such as tax and tariff reductions, wage increase and public sector employment have made that pressure even more acute by creating additional budgetary problems. This economic weakness when combined with geopolitical pressures obviously threatens the country’s sovereignty. Any impartial observer of these developments cannot miss the link between the current situation and the civil war. That unwanted war was an outcome of the autocatalytic process triggered by a supremacist agenda.

President Gotabaya Rajapaksa, who came to power promising a clean slate in governance and economic management, is still wedded to the same agenda. His policy of political exclusion and economic inclusion to the Tamil minority is an illustration of the supremacist agenda. As long as this philosophy prevails there will not be a solution to the national question and the country will remain vulnerable to external pressures.