An executive presidency and a technocratic Cabinet accountable to Parliament 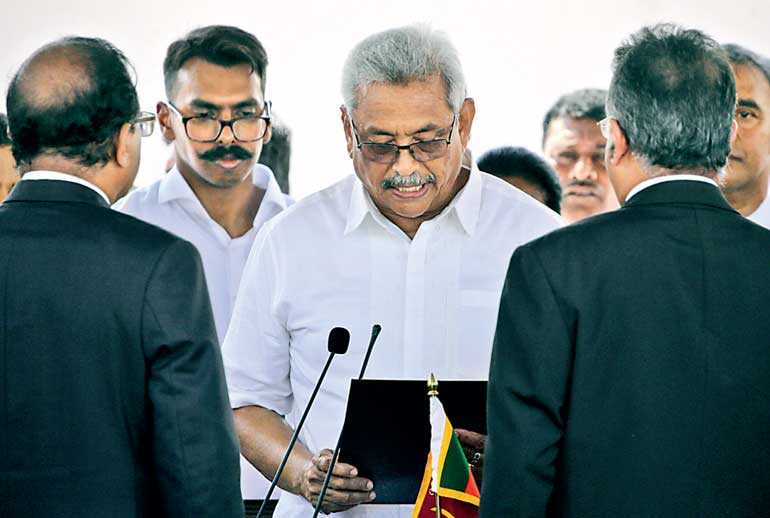 I believe the President of the country needs to continue to be the Head of the State, Head of the Government, Head of Cabinet and the Commander in Chief, etc. but he should not have to act on the advice of the Prime Minister

Basil Rajapaksa of the winning party in the 2019 Presidential Election had said that the 19th Amendment (19A) has some good parts and some bad parts. The 19A indeed gives us much despite its flaws. However, the lack of a coherent architecture therein is a major issue. Cherry picking on such a piece of legislation is the worst possible thing to do.

A Constitution should capture the objectives of the drafters within a coherent architecture. When the 1978 Constitution was born in 1978, Sri Lanka was the only country in Asia to introduce a PR election system or an executive presidency.

It was a unique semi-presidential system with a Cabinet made up exclusively of parliamentarians with a Prime Minister as the go between Parliament and Executive. The architecture of the Constitution matched the vision and the objective of its creator late J.R. Jayewardene.

The new Gotabaya Rajapaksa (GR) Government has an opportunity to think new without tinkering. They first need to present their vision for a Government and related objectives. Hopefully the objectives will not be limited to managing the GR-MR power axis. If decision-making is an important criterion, they need to put the executive presidency on the table, for example.

Since the birth of Sri Lanka’s Constitution in 1978, many semi-presidential systems have emerged across the world and there is plenty of empirical evidence including our own experiences to judge whether an alternative architecture proposed by a governing party will stand the test of application in real life.

To illustrate, I have put forward an objective for a Constitution and an architecture which I believe will achieve the stated objectives. The objective is a Government which can make well-considered decisions on behalf of the people but with accountability.

The architecture I propose is an executive presidency with a technocratic (or a semi-technocratic) Cabinet which can muster the best talent in the land, but with high a level of accountability to the Parliament. The countries I chose for good practices are aspirational peers from Asia (Indonesia), Africa (Rwanda and South Africa), South America (Cost Rica) and North America and Europe (US and France).

I believe the President of the country needs to continue to be the Head of the State, Head of the Government, Head of Cabinet and the Commander in Chief etc. but he should not have to act on the advice of the Prime Minister. The President shall come to power with his political agenda and shall do his best to secure a majority in the Parliament for his agenda.

In that regard, the recent legislation in France to ensure that a Parliamentary Election is held within three months after a Presidential Election is a good move to reduce problems of cohabitation between the presidency and the Parliament. Some of the immunities of the present presidency will have to be revaluated.

As regard to constitutional reforms, Wickremesinghe relied on the Constitution making by committees when he should have taken the leadership in articulating objectives for a Constitution and proposing a suitable architecture

Prime Minister or coordinating ministers as a go between

As R. Premadasa, a former Prime Minister (PM), had famously declared, the PM under 1978 Constitution (before 19A) is essentially a peon for the President. It was true and appropriate too, I believe.  In Indonesia, there’s no Prime Minister but the President can appoint any number of coordinating ministers to manage relationship with the Parliament.

Technocratic Cabinet with possibility of some political representation

A technocratic Cabinet is the key to the proposed new type of Government. The cabinets in Sri Lanka in the past have been parades of various characters going in and out of office while the presidents or the prime ministers work with select groups of insiders. A Cabinet position for most is just a show of power and often a mechanism to siphon off public assets for personal gain.

In the US, the President is free to choose his Cabinet but all appointments to the Cabinet and other key positions must be vetted by the appropriate committee in the Senate. If a Congressman or Senator is invited by the President to join the Cabinet, he or she must relinquish the seat.

In Indonesia too, the President is free to choose his Cabinet from among technocrats and political representatives in the Parliaments. President Jokowi’s latest Cabinet has a mix of politicians from six parties including his main rival Subianto as Defence Minister, and technocrats including founder of Indonesia’s largest start-up. If I understand correct, the political appointees will no longer hold parliamentary seats, but may keep their local mayorships etc.

For Sri Lanka, a technocratic cabinet nominated by the President and approved by the Constitutional Council will go a long way in,

Keeping off riff raff from Parliament including well-meaning bumpkins like Palitha Thvarapperrumna, clueless Baby Hamus like Wasantha Senanayake or other various unsuitable characters

If going to Parliament means engaging in legislation and oversight only, many of the present Parliamentarians or wannabes will be discouraged from contesting.

Parliament as a strong oversight body

For example, all secretaries to ministries too should be vetted by the Constitutional Council. In 2018, some ministries had five to six secretaries going through their doors. The President should not complain about the CC because it can make a selection only from among the list he sends.

Sectoral Committees in the Parliament too should be professionalised with a good support staff, and performance data for all agencies under their jurisdiction should be available online for all to see.  Present Committee on Public Accounts (COPA) and Committee on Public Enterprises (CoPE) will be rendered superficial if the sector committees do their job.

Our Parliament has been discussing electoral systems, for example, since 2003 without seeking adequate outside expertise. Electoral reform considerations in Sri Lanka are driven by formulas and ways of optimising formulas without a deep understanding of the concepts behind those numbers or good practices across the world.

Ranil Wickremesinghe (RS), the PM then, and the present Speaker did a disservice by not actively engaging experts to inform and educate Members of Parliament (MPs). One specialist sanctioned by the PM simply served as an advocate for the system preferred by the PM without informing MPs of other alternatives and their pros and cons.

As regard to constitutional reforms, Wickremesinghe relied on the Constitution making by committees when he should have taken the leadership in articulating objectives for a Constitution and proposing a suitable architecture. Consultations through various committees are undoubtedly needed but leadership is essential.

President GR is starting with a clean slate, big brother presence MR notwithstanding. Unlike former President-Prime Minister duo, GR has the popular support to be bold in articulating a vision and an objective for a Constitution.