Parliament of Sri Lanka is scheduled to debate a Bill presented by the Minister of Finance on 24 May and Published as Bill No. 282 in the Gazette (erroneously dated as 9 July 2018). The legal effect of this Bill is stated as follows:

The first amendment to the People’s Bank Act was passed in Parliament on 24 September 1986, cited as the People’s Bank Amendment Act No.32 of 1986. The purpose of this amendment was to replace Sections 4 and 5 of the Act dealing with the Objectives and the Powers of the bank.

The sections referred to in the proposed amendment, viz. 12, 20, 21 and 43 continued to remain unchanged under this amendment. Since then there were many instances of focusing attention on further amendments.

In particular, during the year 1993, following a big hue and cry about the privatisation of the two State Banks a Committee appointed by the Treasury continued protracted discussions for amending the Acts of Bank of Ceylon and People’s Bank. Those, however, did not turn up.

Therefore amidst the prevailing conjectures about moves to privatise the State Banks, it is prudent to express an opinion after considering several relevant factors associated with the current proposal.

Under the existing Section 12 of the Principal enactment, the share capital of the bank is Rs. six million divided into 120,000 shares of Rs. 50 each. The share capital may, however, be increased from time to time by such amount as may be determined by resolution of the Parliament.

The determination of the paid up capital under this enhanced authorised limit will be done by an order published in the Gazette and every Order made by the Minister shall be brought before Parliament for approval.

To that extent, on the face of it, the amendment provides for the Parliament to intervene before any changes being done to the bank’s paid up capital level. There is also a binding condition that any such determination by the Minister has to be in the ‘interest of the national economy’.

Broad as it appears to have ample possibilities of meddling with ostensible rationalisation. But as things will have to be referred to the Parliament it can be expected that the required safeguards would be sensibly addressed there and any obnoxious issues associated with such recommendations accordingly dealt with.

According to this section there are other requirements stipulated in this regard; viz:

a. No debentures shall be issued without the approval of the MOF given after consultation with the Monetary Board of the CBSL

b. The Monetary Board shall comply with a request so made if the issue of the debentures necessary for compliance with that request is approved by the MOF

It should be noted that by this section even the Minister is checkmated from acting on his own in granting the approval for the issue of Debentures without first consulting the Monetary Board. This is highly germane to the necessity of asserting the decree of eligibility for making decisions of a fiduciary nature without reference to the Monetary Board which is vested with powers to exercise authority to carry out national monetary policy and in particular to control the expansion of money supply. But under the amendment proposed banks can with the approval of the MOF issue debentures without any reference to the Monetary Board.

It is also pertinent to consider the amendment proposed to section 21 in this regard.

By this amendment; the need to provide a compulsory guarantee by the MOF on account of the repayment of any sum due on debentures issued by the bank is to be repealed.

The effect of this amendment is that future issue of debentures by the bank would not be guaranteed by the Government. This gives rise to a precarious position of the principal shareholder (Government) refusing to guarantee the borrowings of an institution under its ownership. 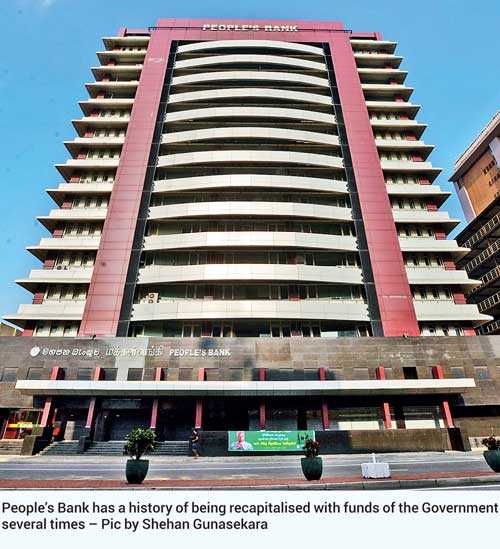 The seriousness of possible repercussions of such an arrangement appear to be worse confounded due to the proposal to repeal para (c) of subsection (2) of Section 43.

According to this section, the MOF has to make regulations for the purpose of carrying out or giving effect to; ‘the form of debentures, the rate of interest payable thereon, the manner and the period of redeeming the debentures, the transfer of debentures and any other matter connected with or incidental to, the aforesaid matters related to debentures’.

By a repeal of this section the entire decision making devolving round debenture issues falls on the bank authorities sans the intervention of MOF and Monetary Board.

In an event if the bank decides to issue convertible debentures this will pave the way for an alternate route to privatisation of the bank shares.

Parliament will have to address these issues and introduce suitable checks and controls unless they favour the issue of shares to public and dilute the State ownership in the bank.

The People’s Bank has a history of being recapitalised with funds of the Government several times before.

1. On 15 April 1993, Treasury entered into an agreement with People’s Bank under a restructuring program consequent to a recapitalisation exercise. GOSL provided treasury Bonds to the value of Rs. 10,541 million for a period of 30 years to help the bank to overcome the capital adequacy requirements. The funding under this exercise were meant to be applied for the following:

3. In 2003 a further financing of Rs. 625 million was provided to the PB to set off the Overdraft facilities granted to CWE

4. Between 2005 and 2008 funds to the value of totalling Rs. 6 billion was released from the Treasury against a grant from the Asian Development Bank to supplement the Capital Adequacy requirements

5. In 2015 under the new Government the Minister in charge of the subject Minister Kabir Hashim made an announcement that a sum of Rs. 5 billion will be released to the People’s Bank to reach the International Capital Adequacy requirements

6. In addition to all the above facilitations the bank has borrowed from time to time a total of Rs. 15 billion from the Bank Employees Trust Fund maintained by the bank

The contemplated debenture issue is the latest mechanisation to fulfil its CAR in terms of the Basel III accord of the Bank for International Settlements.

According to Basel III stipulations all banks are required to achieve a CAR of 12.9%. Basel Committee started addressing these international requirements for the banks in 2013 and originally this target was expected to be achieved by 2015.

The BIS issued the Basel III concord in 2015 giving adequate time for the banks to adjust by March to meet the requirements. This date has now being extended to January 2022. It is this that all commercial banks are aiming to accomplish by various means such as Issue of shares, preferential share issues and by the issue of instruments like debentures.

The Basel formula was first introduced after the sub-prime crisis that erupted in 2007 following the US Mortgage Bank crashes leading to a Global Financial Crisis situation. WE have to note with great appreciation that banks in Sri Lanka were sufficiently prepared to face such a situation due to the precautionary steps taken by our Central Bank. It is noteworthy to state that the CBSL had issued the basic guidelines which were in the formative stage then even before the BIS Implementation period.

According to Basel III, standards have been set as minimum requirements which apply to internationally active banks. The local regulatory authorises in all countries are committed to implement and apply these standards in their jurisdictions.

The announced formula under Basel III with regard to the approach of the exposure of banks to market risks, exchange risks, interest rate risks etc. provide a basis to address reforms required for vulnerabilities in the banking system.

Banks are recommended to maintain a Tier I Ratio of 10.9% and a Tier II Capital ratio of 2%.

Tier I comprises of Share capital and declared reserves of a Bank while the Tier II Capital is achieved by:

What the People’s Bank is trying to achieve is a higher Tier II Capital in order to augment the bank capital to reach the Basel III CAR standards. It appears that the bank has explored all other possibilities and now trying to resort to Debenture issues. There is no imminent danger in this exercise under proper checks and controls. But the million dollar question is, why is it necessary for the bank to have a carte-blanche for this?

The removal of the requirement to obtain the prior approval of the Monetary Board and the determination of the methodology of a debenture issue through the intervention of the Ministry appear to be a license to be granted to the Bank Authorities to freely decide the supplementing of any sum of funds through debentures. Judging from their performance over the years and the failure to put the bank on a real commercial footing sounds an alarm bell which should receive the attention of all.