Home / Columnists/ A critique on governance in Sri Lanka

A critique on governance in Sri Lanka 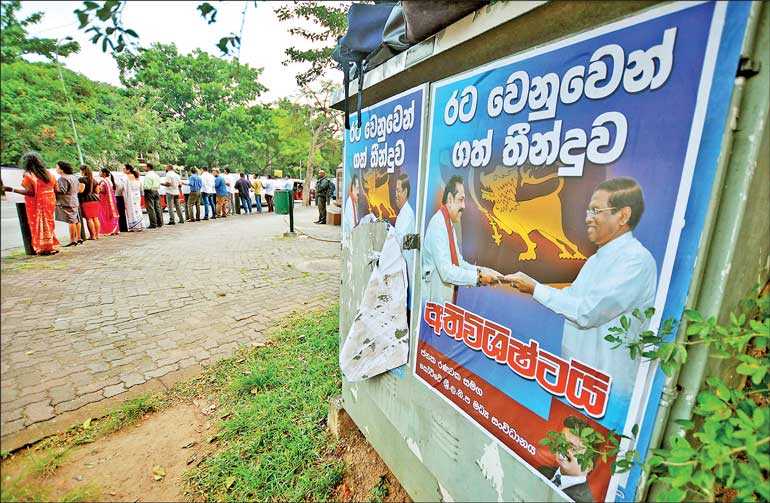 This country could do with 100 politicos based on population ratio. The country will progress as there will be less talk and more work

The governance of a country is based on a constitution. A company is managed based on its memorandum and articles of association but under the New Companies Act M & A is not mandatory. A company can have its own M&A and FR&AR for good governance. Rules, regulations, M&A, FR&AR were introduced by the British followed by the Roman Dutch Law

The British occupiedthe country from 1803. The first company in Ceylon was incorporated in 1835. The rules of corporate governance may have been started by incorporation of this company.

Japan was industrialised and the Japanese wanted to do the same that Germany wanted to do as they were a strength in the East until the West put a stop to both Germany and Japan. At the time of Independence of Ceylon from British in 1948, the USD was Rs. 4.70 and British Pound Rs. 13.30.

Ceylon was the best economy in South/East Asia next to Japan. When Ceylon was granted Independence. FR & AR and Roman Dutch Law was in use in the country.There were right oriented democratic parties and left oriented communist parties. Then came a revolution in 1956. Majority democracy was split and a left right party took over governance of Ceylon. FR & AR and certain sections of RD Law were Ceylonised. Singapore wanted to be Ceylon at that time.

Ceylonisation of British, Dutch and Portuguese as well as Ceylonese business took place from 1958. British, Dutch and Portuguese business houses expelled from Ceylon were invited by Singapore, hereto an unknown state.Singapore became a global hub from 1959 onward to what it is today. Ceylonesebusiness houses were taken over for state management, property owners and business owners drawn down. Ceylon had the best managed bus service and plantations in Asia up to take over, just to name two. Singapore as a state continued a good corporate identity and governance as well as non-interference in private business. The Government of Singapore too set up state owned business with high corporate governance standards, FR & AR based on private sector, management structure/management style.

In the late 1940s and early ’50s the leftist movement became strong and most developed countries, Russia, China, some countries of North Asia close to borders of Russia, Vietnam and Korea started people’s governments. All private companies were nationalised to solve unemployment. Where private management had one employee, right to nine were recruited to do the same work done by one employee of private management. Inefficiency set in and cost of labour was greater than sales price. Sale price had to be increased to meet cost and sales, quality of products dropped.

The same happened to agriculture. Productive agriculture land of land owners were distributed among aimless/clueless people. Agriculture productivity dropped and prices went up. To solve scarcity of food, rations were introduced, resulting in the start of corruption.

Housing problems were solved by the state taking over large houses and property owned by the rich and planting a family in each room of large houses. Owners of private companies were made to be toilet keepers and inefficient state officials and inexperienced members of the Revolution Army were made managers. Recorded in China. Rob the rich to make poor rich was a theme at this time which made rich countries poor. The same happened in Ceylon. This enabledthe UK, Germany, Italy, France, Japan, USA, Canada, G7 to become super powers in agriculture and industry, leading to an export revolution.

Some industrieswhich were started as State corporations, which paved the way to industrialise Sri Lanka from the 1960s, were a good decision; grow more food campaigns were started but all of them were managed by politicians and objective was for these corporations to be job banks for supporters. People of Ceylon, now poor Sri Lanka, once again elected a strong democratic government in 1977 with a strong chair of the cabinet of ministers. Private sector management style answerable to shareholders was brought back. Unprofitable Stateorganisations were peopolised from 1988 with employees allocated 10% of the shares in proportion to number of years of service and listed in the stock market. A bid and buy of 25% of stocks was a common practice and the Government made a killing by listing its unsold shares many times over and above the share price determined by Government valuer.

It is proved that State Companies of most countries are loss making and below industry norms. Most countries are now gradually listing them in the stock market or handed over to private management through bids. Five non-profitable airports of the UK have been sold to the private sector.Five airports of India have been handed over to private management of India. Most sea ports are owned/managed by private companies.

The difference of quality and management style and outlook has improved and bring in high profits to owners, the state and management companies, hereto a burden to the state. Number of passengers/vessels handled have multiplied, quality, efficiency has grown. Immigration, customs and security are still managed by state employees. Surprisingly Hyderabad Airport is State owned but managed by private company GMR Hyderabad International Airport Ltd., operator of Rajiv Gandhi International Airport has been voted one of the 10 Best Managed Airports in the World. Congratulations, Corporate India.

India and China are growing at high speeds of 6-7%, giving a challenge to developed countries. Developed countries even if they grow at 1-2% is a great achievement as they are way ahead of others. Countries such as Bangladesh, Vietnam, Cambodia and some African economies which were behind Sri Lanka are now overtaking Sri Lanka as the chief executives of those countries are on a ‘country first’ mode, whereas politicians of this country are on a ‘to hell with country, how do I win the next election to be rich and get my retirement benefits?’ mode.

Very seldom do voters re-elect governments, with India being an exception at the elections of 2019. Indian State sector and private sector are growing very fast to compete with G8. Highest populations of the world are in India and China. Both are on Overdrive with strong country first leadership and policy. A country that was the best in Asia in 1948 is still struggling to be a developing country after 70 years of independence with elected politicians. India, China, Mexico, Argentina, Brazil, Indonesia, South Africa, Saudi Arabia and Turkey have reached G 20.

The fault is with people for electing politicians with no ‘country first’ 1956. Although the politicians hoodwinked the people as leading the country to prosperity which they did not by observing governments since 1956, Sri Lankans have a very short memory.

If we are to get out of this soup, drastic and unpopular decisions have to be taken by chair, CEO and oversized cabinet of Corporate Sri Lanka. Fools learn by mistakes, wise from others. Sri Lankans are yet to learn. India with a population of 1.3 billion has 25 ministers and 33 state ministers. By observing cabinets of other countries which are below 25 ministries/ministers, their populations are 20 times greater than Sri Lanka or more as in India and China. Companies of China and India are buying corporate giants of the West and quickly reaching Fortune 100-500.

The writer holds the record for leading a State-owned listed company being selected by Asia Money within the 10 Best Managed Companiesof Corporate Lanka 1993/1994.

According to statistics, there are 527 State-Owned Enterprises. Maybe neither the chair nor CEO or ministers of Corporate Lanka know what they are, where they are, or what they do.

Of the 577, 37 are operated at a profit at cost to public by maintaining high interest rates and prices. Balance 527 are operated at a loss which is a staggering 26 billion 10% on a National Budget 2019 of 2,464 billion, a burden to the public.Even the poor beggar on the streets pays VAT to support them. Are politicians of Corporate Lanka, Ministry of Finance worried about this?

In this country uneducated empty vessels make the biggest noise and leaders are frightened of them. Politicians of the opposition always become better managers of economy when they are in opposition. When they are re-elected by uneducated voters, the politicians who have been thrown out become better managers of economy than the government in power. This has been the norm since 1994.

After the peopolisation policy of 1990-1994, to my knowledge no State organisation has been listed in the stock market. All banks/finance companies have to publish their accounts. All listed companies have to circulate their accounts to shareholders 21 days before an AGM and AGM held as stipulated by Companies Act. All SOEs belong to citizens of the country as they are supported by all citizens of the country. It should be made mandatory for the owner of these SOEs which is the Ministry of Finance to publish accounts of these SOEs in newspapers for the shareholders of these SOEs, the public, to be aware of their performance as well as who is managing them.

The citizens as shareholders look forward to the day the chair and CEO of this country will have the guts to instruct the owner, the Ministry of Finance, to publish accounts of all SOEs and peopolise the State-owned organisations as done between 1988 and 1994.

Most countries around us are growing at 4% or above. We are listed at 3-4% and blame it on loss of tourism revenue after 21 April. During the 30-year terrorism we had 300,000 to 500,000 touristsa year. During this timethe economy grew at 4-6 % and country managed its balance of payments.

Developed countries, especially Singapore, select their politicians with meritocracy, pragmatism and ideology. That is the reason they are way ahead of Sri Lanka. May be 10-15% of the 225 have thesequalities. We have 225 for 15 million voters; 15,000,000/ 225 = A politico for 66,000 people / 4 average family size = 16,600. If we add the Provincial Councils, a waste of public funds, there is a politico for approximately 8,000 families. What do the 8,000 families get other than misery? This country could do with 100 politicos based on population ratio. The country will progress as there will be less talk and more work.

So Sri Lanka, the people cry for you. Politicians, show that you have meritocracy, pragmatism and ideology or kick yourself.