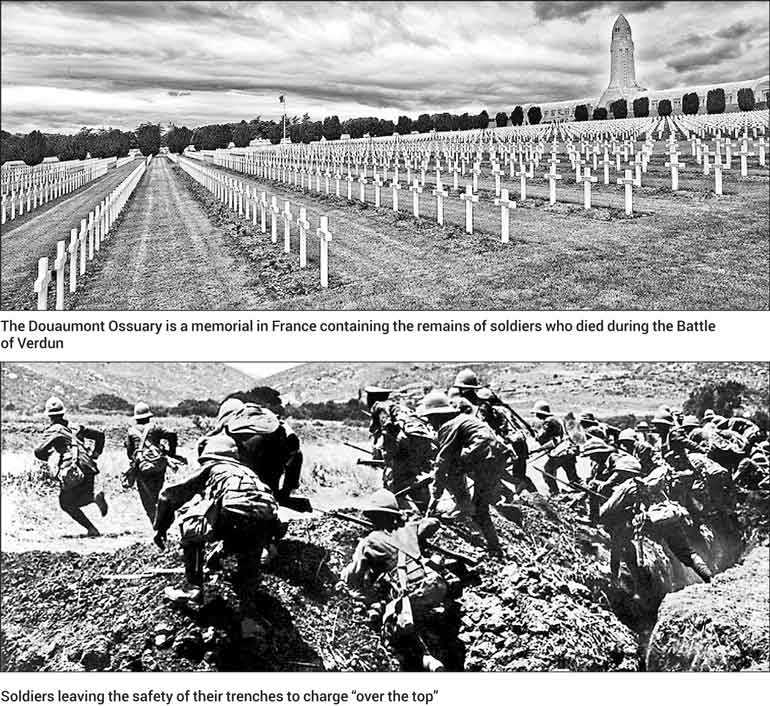 Before the guns of August (1914) blew it to smithereens, to the casual observer, Europe was a   picture of solidity, successful and stable. Having created the ground for the industrial revolution, Europe now carried limitless potential; enjoying high productivity, global trade, broadening literacy, strengthening of the rule of law and the rapid advancement of both public as well as personal rights; the small but dominant continent epitomised progress.

For a few centuries preceding, European abilities and methods had dominated the world. Relatively small countries like Portugal, Holland, England and Spain had built themselves world-wide empires, several times larger and numerous. They were not always won by a feat of arms; the hollowness as well as the corruption of the old societies made them untenable in a changing world. Advancements   in transport and communication shrank the globe, laying bare the pathetic state of many countries. History tells us that decay and vacuity is an invitation, invariably pulling in a stronger force.

The conquistadors did subjugate and plunder, but it was not all fire and sword. In many places, the local community welcomed the takeover, hoping for an improvement in their forlorn lives. And, it was not only military prowess that won the day. With the conqueror came a wealth of new ideas plus advances; parliaments, legal systems, science, education in addition to developed technology; concepts, which to this day guide these countries. Even mighty China, at least putatively, claims its moral legitimacy on the basis of the philosophy of Karl Marx, a German Jew. In the model that created an economic juggernaut out of that country, there is very little of the indigenous. It seems that in the centuries of conquests, Europe was so pre-eminent that it virtually made the rest of the world, in their own image.

When Queen Victoria passed away in 1901(born 1819), British power was at its zenith, famously claiming that the sun never set on their globally spread empire. Victoria reigned from 1837, for 63 years, the longest reign for a British monarch, and the longest reigning queen in the world, until surpassed by her great-great-grand daughter, Elizabeth II, in 2015.

During her rule, the Empire faced many challenges, including the costly Boer War (1899-1902) in what is now South Africa. The Boers (European farmers settled there from the 17th century), well-armed and well-led, gave the British soldiers a determined fight. During what was referred to as the ‘black week’ they caused such high casualties among the British soldiers that consternation spread throughout the British Empire.  Queen Victoria rallied her men, telling a crestfallen Balfour, “Please understand that there is no one depressed in this house. We are not interested in the possibilities of defeat. They do not exist.”

At her deathbed (on 22 January 1901), were her son and successor King Edward VII, and her eldest grandson, Emperor Wilhelm II, who was to later lead Germany during World War 1.

Unbeknown to them, the door was about to close on this familiar world.

Europe was not only England, there were several equally powerful empires; the German, the French, Austro-Hungarian, Russian, Ottoman; powerful, ambitious and competing powers. The rapid economic/industrial rise of Germany, combined with the masterful manoeuvring of Bismarck, its renowned Chancellor, had created a powerhouse in the centre of Europe that would not be denied. These different empires sought to further their interests by alignments and treaties with each other, and if necessary, by waging war.

On 28 June 1914, Archduke Franz Ferdinand, heir presumptive to the Austro-Hungarian Empire, was visiting the Bosnian capital of Sarajevo. A former Ottoman territory, Bosnia/ Herzegovina had been annexed by the Austro-Hungarian Empire to the displeasure of Slavic Serbia, and consequently was a troubled area. A group of conspirators, encouraged by Serbia, was determined to assassinate the Archduke during his visit.

The original assassination plan for the 28 June failed; the grenade thrown by an assassin only injured some bystanders. Unharmed, the Archduke insisted on visiting the injured at the Sarajevo hospital. While returning an hour later from the hospital visit, his convoy took the wrong turn, going down a street where, coincidently, one of the assassins was passing by. This time there was no mistake, the assassin shot dead both the Archduke and his wife.

Those shots on 28 June 1914, a terrorist act committed by a small gang of Serbian nationalists in an insignificant corner of Europe, were to set in motion a series of actions and reactions which led to a World War, changing the course of history, shattering a familiar and long established world order for good.

The dogs of war

Outraged by the assassination, Austro-Hungary demanded satisfaction from Serbia. Undeterred, Serbia rejected the harsh demands as unacceptable, whereupon Austro-Hungary declared war on it. This led to the Russian Empire, ethnically as well as politically aligned to Serbia, coming to its aid, mobilising the massive Russian army. The German Kaiser Wilhelm II, bound by treaty as well as ethnicity to assist Austro-Hungary, asked his cousin, the Czar Nicolas II to call off the Russian mobilisation. Russia refused, which led to the mobilisation of Germany. France, committed to come to Russia’s aid, declared war on Austro-Hungary and then Germany.

The German strategists confront a historical dilemma, imposed by its geography. With two very powerful neighbours, France on its West and Russia in the East, in the event of a war, Germany would be compelled to fight on two fronts, with hundreds of miles in between. Grappling with the problem, Alfred von Schlieffen, Germany’s outstanding Chief of General Staff (1891-1906) came up with a plan which was predicated upon a superlative performance from the German soldiery.

In essence, the eponymous plan envisaged a quick victory in the West before transferring the army to the East to deal with that theatre. Accordingly, nearly 80% of the German army were to be committed to the West in order to gain a decisive victory against France and her allies, while the balance would act as a ‘screen’ in the East, playing for time. After the issue is decided in the West, necessary forces could be transferred to the East. The Germans, true to their methods, had developed a superb railway and transport system for the purpose. Ten years later, this was basically the plan that the German army used in the Great War.

For the plan to work, a quick and decisive victory in the West was crucial. In the Schlieffen Plan the attack on France had two prongs. The left prong, a thrust in the Alsace-Lorraine area was a feint, calculated to draw the French forces there, while the main effort was the right prong, a massive concentrated attack through Belgium going right up to Paris, while also closing the north coast to British intervention. Here again, overwhelming forces were to be concentrated on the right prong.

Schlieffen’s successor, Helmuth von Moltke the junior (of the illustrious military family), apprehensive of the risks inherent in a weak left prong, subsequently changed the ratio of forces considerably between the two wings. And, eventually as real fighting (in the World War) would show, this weakening of the right wing left it just a little too weak to fulfil the decisive task of vanquishing France in one single thrust.

Great Britain could ignore neither the German trampling over of Belgium, nor its attack on France. Any move thus by the Germans in the West, necessarily drew in Britain.

Like a gigantic engine that cannot be stopped once started, the World moved inexorably to the Great War, engulfing the whole of Europe, spreading eventually to other continents, Africa, Asia and the Middle East, causing the deaths of roughly 40 million in the four years of fighting (the world population then was much less, making this a horrendous blood bath).

Despite their angry declaration of war, Austro-Hungary did not fare well against the Serbs, needing a military “stiffening” from their German allies. Initially, the Russians too performed well, requiring a greater German effort in the East than anticipated to contain them. But it was the Western Front which soon developed into a stalemate, giving rise to the horrible trenches that came to epitomise the agony of the war.

This was the war that demonstrated with bloody clarity the horrific killing power of science and technology. Heavy guns that could fire highly destructive missiles, tanks, fighter planes, submarines all made their entry during this gigantic struggle. A most pernicious weapon was used by the combatants in the form of poison gas. There was universal despair, human beings were massacring each other like never before, and there was no end in sight.

In 1917, the Americans joined the allied powers, tilting the balance somewhat. Then in mid-1918 the Germans launched an all-out attack in the West, helped by the Russian pull-out from the war, post- Bolshevik revolution. When this offensive failed, the wind went out of the German sails. There were revolts and unrest in Germany. The Kaiser abdicated, paving the way for the Weimar Republic. On 11 November 1918 Germany signed the armistice.

Many Empires which stood like immovable features collapsed after the war; the Russian, German, Austro-Hungarian, Ottoman empires went out of history. For the first time in history, we saw in Russia the establishment of a socialist government, holding allegiance to neither a king nor a religion. Austro-Hungary broke up into several countries. Many new countries emerged. Germany lost territory, burdened with huge war reparations, went into a period of instability ending in the emergence of the Nazis in 1933. Britain was badly battered. America emerged ever stronger. In the colonies, men’s thoughts were moving towards independence. But that had to await another war to bear fruit.

An orderly, seemingly fixed world was turned into a chaotic, uncertain place by the First World War. Worldwide, the millions affected by the war were profoundly impacted by the carnage, disturbed by the human capacity for cruelty. In their hearts and minds something changed, and an intense   questioning of faith and a loss of innocence ensued.