“We can’t wait”: Maldives desperate for funds as islands risk going under 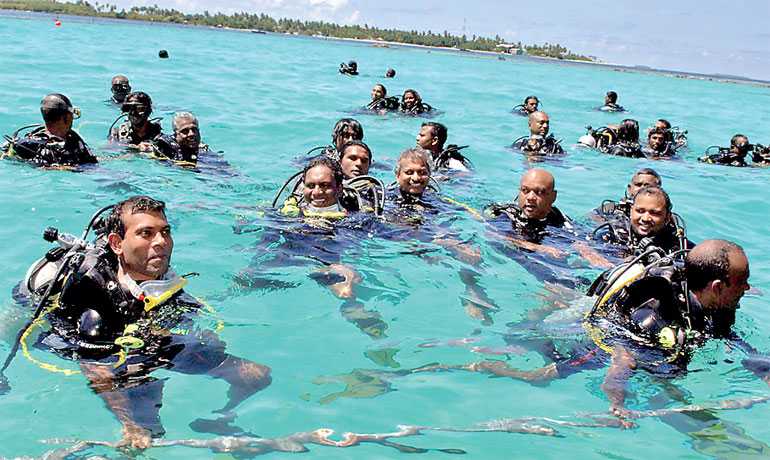 NEW DELHI (Reuters): The tropical Maldives may lose entire islands unless it can quickly access cheap financing to fight the impact of climate change, its foreign minister said.

Yet the Maldives, best known for its white sands and palm-fringed atolls that draw luxury holiday-makers, has struggled to find money to build critical infrastructure like sea-walls.

“For small states, it is not easy,” Foreign Minister Abdulla Shahid told Reuters in New Delhi. “By the time the financing is obtained, we may be underwater.”

At the UN climate talks in Madrid in December, the Maldives and other vulnerable countries pushed for concrete progress on fresh funding to help them deal with disasters and longer-term damage linked to climate change – but failed.

Shahid was hopeful the next round of talks, slated to take place in Glasgow in November, would yield better results.

One of the world’s lowest-lying countries, more than 80% of the Maldives’ land is less than one meter above mean sea levels, making its population of around 530,000 people extremely vulnerable to storm surges, sea swells and severe weather.

In 2004, the Indian Ocean tsunami ravaged the Muslim-majority state, causing financial losses of around $470 million – 62% of GDP – and hitting infrastructure, including its only international airport that was shut for several days.

Two of the country’s main industries – tourism and fishing – are heavily dependent on coastal resources, and most settlements and critical infrastructure is concentrated along the coast.

In 2014, more than 100 of the archipelago’s inhabited islands were already reporting erosion, and around 30 islands are identified as severely eroded.

The Maldives spends around $ 10 million annually for coastal protection works, but will need up to $ 8.8 billion in total to shield all of its inhabited islands, according to a 2016 estimate by its environment ministry.

“In order to protect the islands, we need to start building sea walls,” Shahid said. “It’s expensive, but we need it. We can’t wait until all of them are being taken away.”

The UN has created a pot to help developing nations, called the Green Climate Fund, which has already approved nearly $ 24 million in funding to the Maldives, according to its website. Some individual nations have also offered help, including Japan which contributed to a sea wall round the Maldives’ capital Male. Shahid did not specify where his government was pushing for more funding.

However, Environment Minister Hussain Rasheed Hassan said recently his country would have to turn to banks given inadequate funding elsewhere despite the fact small nations like his were paying the price for the developed world’s pollution. [nL8N28L45T]

“We have to beg some of these (big) emitters to provide money for us. Is that fair?” he said.