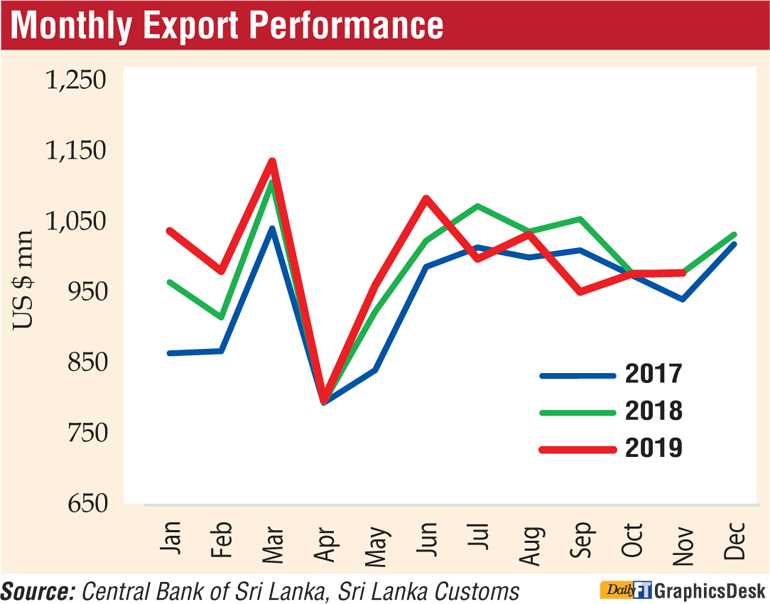 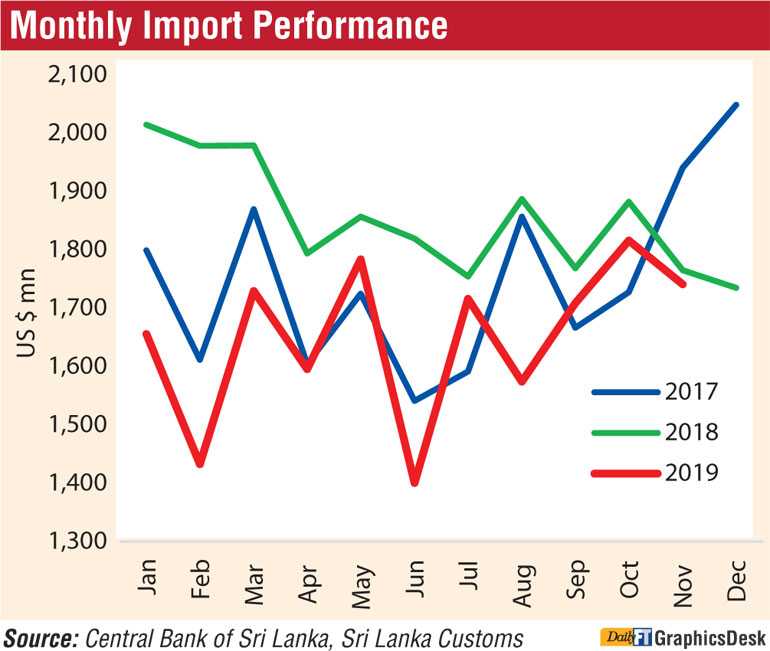 Central Bank on Friday said the trade deficit contracted marginally in November 2019 (year-on-year), with both imports and exports declining.

During the first 11 months of 2019, the trade deficit contracted compared to the corresponding period in 2018, as a result of the significant decline in expenditure on imports along with a marginal increase in earnings from exports.

The terms of trade, i.e., the ratio of price of exports to the price of imports, deteriorated substantially by 9.0% (year-on-year) in November 2019, as export prices declined at a faster pace than the decline in import prices. Cumulatively, the terms of trade deteriorated by 1.6% during the first 11 months of 2019 in comparison to the corresponding period of 2018.

In comparison to November 2018, earnings from merchandise exports declined marginally by 0.1% to $ 979 million in November 2019, with all major subsectors broadly recording a similar trend.

Earnings from agricultural exports declined in November 2019 showing a mixed performance in its subsectors. On a year-on-year basis, earnings from tea exports declined as a result of lower average export prices in line with the fall in international market prices of tea, although export volumes of tea continued to increase.

Earnings from industrial exports remained broadly unchanged in November 2019 in comparison to November 2018. Earnings from rubber products declined as a result of lower tyre exports, while earnings from machinery and mechanical appliances declined with lower performance of all subcategories.

Conversely, earnings from textiles and garments increased in November 2019 supported by higher demand for garment exports from the EU and non-traditional markets. Export earnings from gem, diamonds and jewellery also increased as volume exported under all categories increased.

Earnings from mineral exports, which account for only 0.3% of total exports, increased in November 2019, year-on-year, led by ores, slag and ash exports. The export volume index in November 2019 improved by 11.6% (year-on-year), while the export unit value index declined by 10.5%, indicating that the decline in exports was driven entirely by lower prices when compared to November 2018.

Contraction of merchandise imports continued for the 13th consecutive month with a moderate decline of 1.3% (year-on-year) in November 2019 to $ 1,741 million, driven by lower intermediate goods imports.

Expenditure on consumer goods imports increased in November 2019, led by food and beverages imports such as vegetables (mainly onions), sugar and dairy products due to both higher import volumes and prices, although non-food consumer goods category driven by lower personal vehicle imports continued its declining trend on a year-on-year basis.

Expenditure on imports of intermediate goods declined in November 2019, mainly due to lower expenditure on fuel, owing to both lower import volumes and international prices related to all subcategories, namely crude oil, refined petroleum and coal.

The import volume index increased by 0.3% while the unit value index narrowed by 1.7% in November 2019, indicating that the decline in imports was driven entirely by lower prices when compared to November 2018.