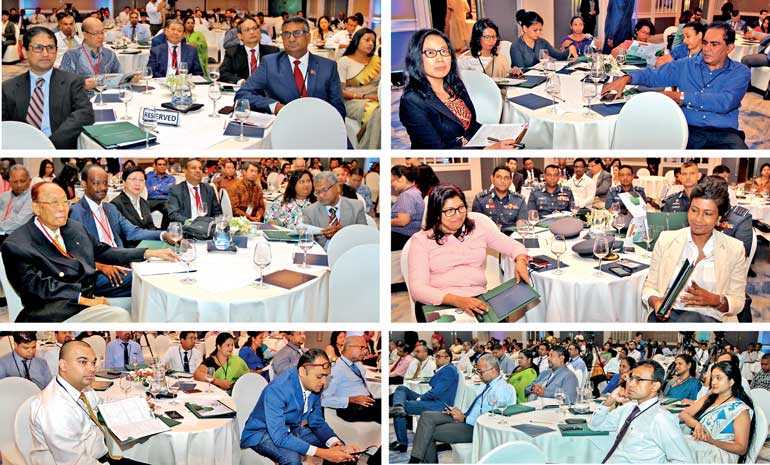 Governmental Organisations, and individuals, to enhance their skills as corporate leaders.

Organised by the Centre for Leadership and Training Development (CLTD), this annual conference is being held in Sri Lanka for the first time.

The two-day conference is themed ‘Shaping A Sustainable Future’, and will cover many areas such as women’s empowerment, women’s role in nurturing the future workforce, governance for transitions maintaining a sustainable future in uncertain environments, developing a new-Gen Z future workforce, talent assessment through artificial intelligence, STEM in social enterprises, technology management and sustainable dividends, sales transformation, seasons of life’s transitions / reinventing oneself to meet future challenges, emotional excellence – knowing self and others, and applied emotional well-being.

State Finance Minister Eran Wickramaratne, delivering the keynote address at the inaugural session, outlined increasing women’s participation in the labour force, public sector reforms, and changes in the education system as three critical factors in avoiding the risk of Sri Lanka falling in to the middle income trap and continuing to be classed as a developing country.

“In the stand-up comedy show this weekend, one of the jokes was about how Sri Lanka is always a developing country, and will continue to be a developing country forever. But jokes apart, this is a valid fear – we have had the same debates for years. Now we must think strategically about how to escape the middle income trap and move forward,” he added.  Wickramaratne said including women in the workforce and at the higher levels of business and government would be the easiest change to move Sri Lanka to the next stage of growth, and towards a sustainable future.

“There is a whole segment of educated women who have the skills to participate in the economy, who have been shut out. This is the easiest change to make, because they are trained and able to contribute,” he said.

However, to make this possible, the State Minister said Sri Lanka must make a concerted effort to remove barriers that make it difficult for women who have children, or run households, or don’t do either, but are discriminated against simply because of their gender to enter the workforce.

Attributing to some of the statistics he said Sri Lanka’s Labour Force Participation (LFP) was 36% for women versus 75% for men in 2016, which is the 14th largest gender gap in LFP globally. In 2016, young women have the highest unemployment rate in Sri Lanka; which is 29% for the 15-24 age group – Generation Z. The gender gap in youth unemployment has widened since the end of the civil war.

“This is an issue of equality, and an economic concern,” Wickramaratne stressed.

According to last year’s World Bank statistics, he said only 28% of women in South Asia have a job or are looking for one, compared to 79% of men — which is the second lowest in the world, after the Middle East and North Africa region at 21%.

Unfortunately, in Sri Lanka, Wickramaratne said, there are many social and structural barriers that hinder women from entering the economically active workforce.

The State Minister cited Helena Morrissey, a mother of nine children, as a great example, citing how she has emerged as a contender in the race to succeed Mark Carney as Bank of England Governor.

“Workplaces must have policies that accommodate women and we – men, husbands, and fathers – must share the burdens of running homes and raising children. We must integrate women into our economy to move forward,” Wickramaratne said.

Having worked in the private sector and in government, he said the differences are startling. “I am always shocked by how complacent people are in the public sector,” he added.

Wickramaratne was of the view that a country cannot proceed beyond its public sector, and it was vital that Sri Lanka focus on improving public sector by changing people’s attitudes, invest in skill development, training and set in place incentives and structures that facilitate transparency, accountability, and efficiency.

“We have allowed a culture that promotes this complacency and inefficiency. We have low expectations of public services and public servants. We do not demand efficiency, or accountability, or transparency. Those working in the bureaucracy know that their rewards and punishments are based on politics not performance,” he said.

The absence of the opportunity cost concept in public service, he said, has resulted decisions being pushed back tremendously within the administration.

“In business, you are constantly looking at the opportunity cost. If we have a disagreement, we postpone the decision. If that’s not good enough, we appoint a committee. And if that’s not good enough, we get a report, 3 months, 6 months, or 1 year later. Listed companies in SL, for instance, are mandated to disclose quarterly financial statements within 6 weeks of the completion of a quarter. I must say, there has been a remarkable improvement in the last four years. Yet we still have public enterprises that cannot keep up with the requirements of the private sector in disclosure. For instance, it is possible to link promotions and increments to execution of well-defined KPIs. The beginnings of such a culture have been seen under this Government, and it is essential that this be embedded in governance practice,” he said.

The State Minister also claimed that over the years, we have fuelled a culture of dependency, in which State-Owned Enterprises (SOEs) are dependent on politicians.

“Politicians will not be the ones to change that, because it is in their interests. The voters must create a strong mandate that demands these changes. Imagine if the public sector had the same incentive structures as the private sector, and functioned with the same efficiency and drive, how far this country would move ahead,” he added.

He also said the education system must change. “We have failed to capture the imagination and confidence of the students. Currently, our education system demotivates children. O/L’s and A/Ls act as systems to weed out children, and universities cannot accommodate most students who pass their A/Ls. We have failed to engage the youth. We have not invested in training them to have the skills that they will need, and have not capitalised on their strengths. But education should be used to motivate, to teach children to think, and not just memorise. Children must be shown that their different skills – whether in STEM or art – are valuable, and can and will be used by businesses and government,” Wickramaratne said.

The State Minister said we must try and give all Sri Lankans this skill, so that they too can vie for the jobs and opportunities that are open only to the English-speaking class.

“We must educate our children on the skills of the future. We must bring up a new generation of leaders with a vision for this country. A generation of leaders that are hopeful and committed to changing the systems and structures that have stifled and thwarted us,” he stressed.  He also noted it was important to maintain this culture of learning and growing past the stage of school and in workplaces, where there is a culture that keeps us open to learning, innovating, and changing so that we can adapt to new challenges.

“We must now invest in people, not roads. We must invest in women, children, the youth, the public sector. We must develop people because it is the citizens of this country – you – who will move us forward. And investing in people is the best way to invest in a sustainable future,” Wickramaratne said.

Speaking at the conference, ARTDO International President and CLTD Founder Janaprith Fernando highlighted the importance of human resource development as an essential precondition to social and economic growth.

Noting this year’s theme was selected after careful consideration, he hoped by the end of the conference, it will be a life changing experience for each and every individual.

However, Fernando expressed disappointment, as most of the companies in Sri Lanka are ignorant of the power of human resource development.

“I called around 250 to 300 companies to send in their employees for the conference, but only 30% to 40% of the companies understood the importance of human resource development, and gave that opportunity to their employees. It’s sad. At a time when our economic growth has slowed down due to various internal and external challenges, it’s the best time we invest in our people. Unfortunately only a handful of companies have understood this,” he said. The ARTDO President also extended the heartiest gratitude to all foreign delegates for visiting Sri Lanka post-Easter Sunday tragedy.

ARTDO International Chairman Emeritus Dr. Thomas Chee, expressing his appreciation for CLTD for organising this year’s conference in Colombo, underscored the importance of human resources for the success of inclusive economic growth.