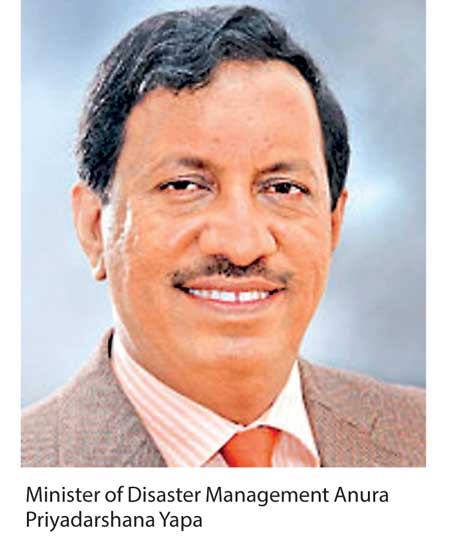 Lives of innocent children were taken not by the rain, but by the inaction, negligence and failure of you and your ministry who are responsible for managing disasters in Sri Lanka.

Are the lives of the common people so expendable to the insensitive rulers of this country? Where are those comrades who vowed to take action if the Yahapalana regime fail to deliver their promise? Where are you? Wake up! What are you waiting for? Your silence is deafening!

Hold the man accountable, he who so miserably failed to do his job. Ask him to resign. Ask for a competent person to take charge of the Ministry of Disaster Management, immediately!


Anura, were you scraping coconut for one year?

You failed to inform the people about the imminent disaster. You failed to evacuate the people, your own people, people who voted for you, people of your country of which you are a minister!

You failed to mobilise the Government officers, the thousands of Gramasevakas, the Divisional Secretaries and the Police to evacuate people to designated safe-zones. Hell, you failed to even designate any safe-zones for people to run to! What kind of a disaster management minister are you?

You failed to equip the hospitals in target areas with medicine, doctors, nurses and support staff in case the worst happen. You failed to stock food, clothing and essentials at designated relief centres. You failed to use the media to inform the people in risk-zones in time on the imminent threat.


Anura, was Mexico more important than your

What kind of a minister gives speeches about disaster management at a conference in Mexico when there is a disaster happening in his own country? You are the highest authority for disaster management in this country. This country and its people should be your utmost priority. You should’ve taken the first flight home the moment you heard about the disaster. Hell, if you predicted this disaster, you shouldn’t have left in the place!

Anura, step down and give that job to somebody who can do it

Anura, you are a minister of this so called Good Government. The right thing to do is to apologise to your people for your failure as the top authority of disaster management in Sri Lanka, and resign from your post immediately. That’s at least a principle of Good Governance. The people of this country has suffered enough, Anura.

For 30 cursed years our people died, our children died, our women died, our men died. People of this country deserve better leaders than you. We deserve somebody who is serious about their job for which we pay an awful hefty price.

We pay your salary, Anura. We pay for your house, your food and for your fancy cars. All we want is for you to do your job right. Is that too much to ask, Anura? The citizens will one day charge people like you for negligence of public duty.

But we can’t let this happen again. We live in the 21st century and there are far better technologies to predict weather, light-years ahead of the jokers at the met department of Sri Lanka and their mediocre tools and useless weather updates. Disaster management is a developed science and you clearly have no clue on how to do it.

Your team is no better than you. You keep failing in your duties. So, we need a minister who can do it. We don’t care which party, which religion, which ethnicity, which school or which university he or she is from. We just need somebody who has the knowledge, the skills, the experience, and most importantly the genuine wanting to manage disasters in this country.

We need somebody who has the empathy to at least be there when the worst happen.

Please for the sake of the drowned children, go home, Anura.