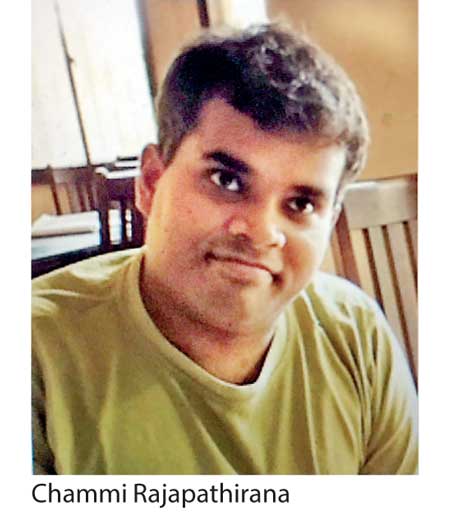 “How does a person cope with autism?” asked a member of the audience during a presentation. The presenter walks up and down the platform contemplating a response, wrings his hands, makes a nervous sound, then smiles and makes a dash to the computer. Soon his message appears on the projection screen:

“The Potter who spoiled

Poetry into my Heart

The audience applauds. The presenter looks askance. He seems to take the recognition in his stride. But then, he wrings his hands again, smiles and says something incoherent and loud…perhaps his way of saying “thank you”.

The Presenter: thirty-nine-year-old Chandima (Chammi) Rajapathirana, who I have known for most of his life as a family friend, has autism. He is often challenged to make presentations to interest groups internationally and locally. Given that he cannot speak, nor engage in a verbal discourse, his “friend” and medium of communication is a keyboard and a computer screen.

The world has increasingly realised the hidden potential of the autism in the arts. In the month of April that just passed, World Autism Day and World Book Day were observed as separate commemorative days. Who would have thought that when the day was celebrated last year that a brilliant autistic young man would have brought the nexus between the two to life in little Sri Lanka?

And here we were at the Gratiaen Literary Awards (2015) with Chammi shattering the exclusive glass ceiling and walking up, nay, ambling along, to be recognised as one of the runners-up for the prestigious Literary award sponsored by best selling author Michael Ondaatje.

gift to the field of autism by Douglas Bilken Emeritus Dean of the School of Education, Syracuse University, New York.

No wonder that as he accepted his award of recognition the audience exploded in cheers…and tears! And, I guess, all that Chammi did not do in his fertile mind was to cartwheel in celebration for the recognition in his own country.

Autism is widely prevalent. One in 68 children born in America are said to fall somewhere in the autistic spectrum. Autism, according to TIME, which also featured Chammi in its cover story, is also known to be spreading rapidly in England, Denmark, Japan and France. There is little doubt that in other parts of the world—Sri Lanka being no exception—that below the veneer of health issues autism exists but is labelled differently, sometimes with denial and often in pejorative terms—“Aney, lamayata tikkak pissu”—the maids and servants, in my time, would say colloquially in the backrooms.

Undeterred, what Chammi and his parents Anoja and Sarath the Rajapathirana have set up in Battaramulla is a path-breaking Foundation: EASE— to Educate, Advocate, Support and Empower the disadvantaged. The foundation trains teachers and caregivers. Chammi himself serves as the lead and primary person who communicates using computer-aided facilitation about what autistic people are thinking and doing and wish to convey. He is the teacher’s teacher; the evaluator when parents bring kids for enrolment; and the provider of feedback to parents of what is on the mind of the kids.

This bridge that Chammi builds between the unknown and those who want to know becomes a sacred bond of motivation. One begins to realise that if persons with autism are given opportunities, their vast potential can be unlocked in a stunning manner, as has been the case with those who are trained at EASE. To work with these kids at EASE is God’s own work.

So let’s turn to the poet Chammi who makes the point on support needed:

You teach my hated Autism

To stop destroying my peace

My hand in yours uplifting me

To my trap I say goodbye.

And in this quest the next hill that the EASE Foundation is seeking to conquer is to establish the HEVANA – Home of their own— so that what has been initiated in a rented abode will be sustained for generations to come through a permanent Hevana.  And so should we all support

(The writer can be reached by email Mohamed@mvmuhsin.com.)