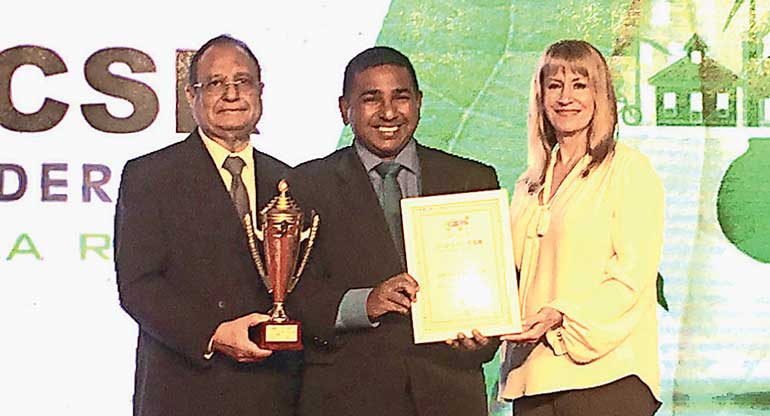 The Global CSR Excellence and Leadership Awards, held annually to mark World CSR Day, is part of an international two-day summit hosted by the World CSR Congress, which brings numerous CSR leaders across the globe under one roof. The awards ceremony, which was held on 18 February, saw over 130 countries unite to celebrate leadership aimed at building a better society and a better world.

The theme of this year’s summit, ‘Profit for Purpose’, looked to Sustainability and CSR for Inclusive Growth, Reformation, Rehabilitation and Reintegration, Value Driven Social Change, and Green Economy for Progress and Development, among other key sub-themes. The forum operates on the key premise of how leadership can make a difference; where leaders believe in the value of CSR and create a common thread uniting nations and people who pursue CSR more responsibly and view it as a tool to the development of the future.

The conferring of the award is an intensely researched process undertaken by a carefully selected research cell, who then produce a shortlist of trailblazers recognised for their extraordinary achievements in sustainability and championing environmental causes. This list is then reviewed by a Jury comprising senior professionals from across the globe.

The award is a landmark achievement for Sri Lanka, setting a benchmark for leadership within the sphere of sustainability, value driven CSR and its positive impacts on society. Commenting on his award, Sanith de S. Wijeyeratne said, “To be sought out and recognised for this achievement is an absolute honour. I was conferred this award because of the talented and highly skilled team at the Carbon Consulting Company that is equally passionate about making a positive impact on our environment as we strive towards quelling climate change and transforming our reality. My sincere appreciation goes to them and to the dynamic Board of Directors of CCC for their unstinted support and guidance. I would also like to extend my appreciation towards The World CSR Congress for their efforts in drawing and uniting leaders from across the globe to collectively work towards making a difference to our communities and planet”.

Sanith, an Attorney-at-Law with an MBA from the Postgraduate Institute of Management (PIM), has been at the helm of The Carbon Consulting Company for over the five years, propelling the company from its start-up phase to its current status as the country’s leading provider of Corporate Sustainability Solutions. Sanith’s notable achievements have led to him being invited to be an expert panellist at the sixth South Asian Economic Summit under the plenary theme ‘Managing Water Resources, Food Security and Climate Change in South Asia’ in 2013, to being invited by the Asian Development Bank as an Expert Panellist on ‘Environment and Development’, at the Fourth South Asia Judicial Roundtable on Environmental Justice held in Kathmandu – Nepal, and being an expert speaker at the Sri Lankan National Law Conference in 2014.

He was also selected as Master Speaker on the ‘Implications of COP 21 on Indian Industry, by the Confederation of Indian Industry and the Indian Green Building Council in Mysore, 2016, and as a Distinguished Speaker at the 2016 International Expert Forum on Climate Change Response that was held in Seoul, among other significant events.