China Merchant-led JV to have only 1,235 acres in Hambantota port vicinity 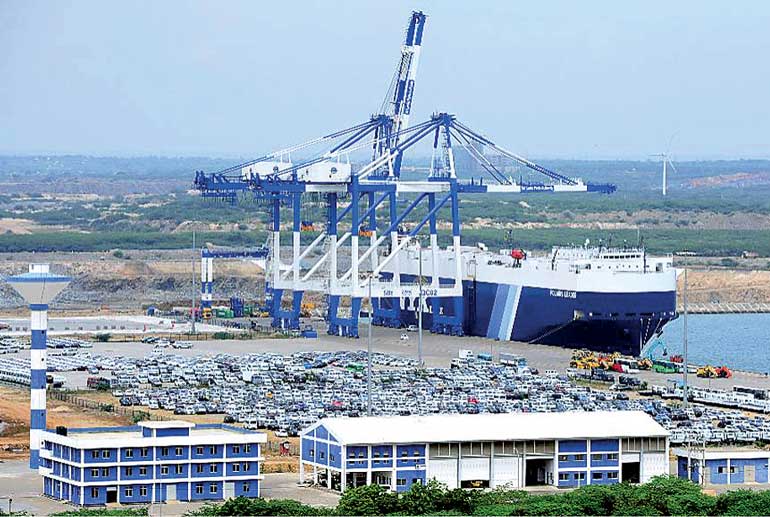 Contrary to misinformation by the Opposition, the China Merchant Port (CMPort) led joint venture will have only around 1,200 acres of land adjacent to the Hambantota Port whilst the 15,000 acre land area earmarked for industrial zones in four districts is a different and unrelated initiative.

“CMPort’s discussions with the Government involve only the land already within the existing port perimeter and 5 km sq (around 1235 acres) of land contiguous to the port. This land includes the area in which the port is already built and there is no necessity to displace any people or property as alleged by various parties,” industry sources said.

They said that CMPort has nothing to do with a land allocation of 15,000 acres, which incidentally has been the focus of Joint Opposition protests.

The smaller land area allocated in CMPort will be used for port-related services necessary for the proper operation of a world-class port facility to function to its fullest potential. This includes a Logistics Distribution Center which will facilitate trade, supply chain management, storage, redistribution, etc., both locally and internationally.

The Government and the CMPort are finalising negotiations on restructuring the widely described ‘white elephant’ Hambantota Port under a Public Private Partnership with the Chinese investor seeking an 80% stake for $ 1.12 billion, with the balance stake held by State-owned Sri Lanka Ports Authority.

At present, the Government and CMPort are negotiating the Concessions Agreement, the Shareholder Agreement and the Lease Agreement, following the signing of the Framework Agreement a few months ago.

Being a world leader in the development and operation of ports, CMPort has the capacity and expertise to develop the Hambantota Port into a world-class hub while assisting the Lankan Government in operating the same. Synergy can be achieved between the ports of Colombo and Hambantota.

CMPort has a vision to develop and expand its footprint as a global port and terminal operator. Towards achieving this vision, they have successfully embarked on, and undertaken major port development projects in the Asia Pacific, African and the European region.

CMPort was selected as the preferred party to restructure and revive Hambantota Port as it was the only bidder with a proven expertise in running ports globally, apart from the higher price ($ 1.12 billion) quoted for the 80% stake as against $ 750 million bid by China Harbour for a smaller 65% stake. If SLPA were to take a higher 35% stake, the debt-saddled, State-owned entity’s financial commitment would have been much larger.

The CMPort was considered favourably because it was commercially very attractive and the Government was being completely relieved of the debt burden based on the prerogative of the Government.

Sources said CMPort’s proven track record of changing a small fishing village to a deepwater container port and a global logistics and supply chain hub in Shenzen was a key factor considered by the Government. Prime Minister Ranil Wickremesinghe, along with Minister Malik Samarawickrama last year, made a study tour of Shenzen.

The recent award made by Lloyds list of London to CMPort for ‘port operator of the year’, bears testimony to the capabilities of CMport in taking Hambantota to its full potential.

Based on the Sri Lanka-China Government to Government agreement, the former received bids from two companies CMport and China Harbour. “The Government selected CMPort as they were the only bidder with a very wide global port-owning and management experience. The other bidder’s credentials were limited to engineering construction only, and is currently constructing the port city and Shangri-La hotel in Hambantota and Colombo and other construction projects in Sri Lanka and other parts of the world,” sources said.

Another factor favouring CMPort was its proven track record in running South Asia’s most modern deep water port terminal - the Colombo International Container Terminal in the Port of Colombo - and being globally recognised for its super performance.

CMPort is expected to utilise its expertise and experience as a leading global terminal operator and investor, and leverage on the success of its existing terminal (CICT) in the Colombo Port to ensure the success of Hambantota Port. In doing so, CMPort plans to improve existing terminal facilities to world-class standards and transform Hambantota into an International Maritime Center. It will also combine the port’s strategic location with CMPort’s extensive carrier network to attract considerable traffic to and from the port.

CMPort is a leading global port operator and investor with 55 terminals across 15 countries, strong partnerships with major shipping lines, and the full financial backing of the China Merchants Group.

In 2015, CMPort’s ports handled a total container throughput of 83.66 million TEUs, ranking second in the world, and was awarded ‘Best Terminal Operator of the Year’ for the year 2015 by Containerization International.

Headquartered in Hong Kong, CMHI is listed in the Hong Kong Stock Exchange and is one of the 40 constituent stocks for the Hong Kong Hang Seng Index with a current market capitalization of approximately HK $ 51 billion.