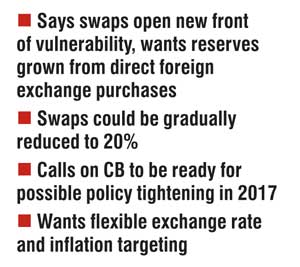 The International Monetary Fund (IMF) has requested the Government to reduce reliance on currency swaps with commercial banks and grow reserves through direct foreign exchange purchases, which would also extend to maintaining a flexible exchange rate and inflation targeting to build insulation amidst growing external vulnerabilities.

IMF staff team head Jaewoo Lee, talking to reporters after the approval of the second tranche of the $ 1.5 billion Extended Fund Facility (EFF), warned that Sri Lanka should avoid opening up a fresh front of vulnerability given its high debt and other macroeconomic challenges.

He warned that credit growth still remained high and needed continued monitoring to safeguard it from vulnerabilities. The Central Bank should stand ready to adjust policy rates further if inflation or credit growth stays elevated or accelerates, recommended Lee. Going forward he insisted there was a need to strengthen the supervisory and regulatory framework and indentify and limit vulnerabilities in the financial sector.

“Recent depletions of reserves could put pressure on Sri Lanka’s external vulnerability, though at a moderate pace reserves have been falling since mid-October while they need to be accumulated further through direct purchases to keep reducing Sri Lanka’s vulnerability to external pressures. Concerted efforts will be needed to re-accumulate reserves as targeted under the program,” he said.

“We are not saying there will be a need for larger reserves but given the global situation there is a bigger chance they will be needed and given that the prudent thing to do will be to make sure there is sufficient room for action. From that standpoint we have set the target for continuous reserve accumulation and we are hoping the target can be met or even exceeded, if possible.”

Sri Lanka’s Central Bank currently maintains a portfolio with about $ 2 billion in swaps. As of December 2015, the Central Bank had $ 2,135 million of swaps outstanding. Central Bank Governor Dr. Indrajit Coomaraswamy earlier this month noted that preparations were almost completed for an additional $ 200 million from the China Development Bank (CDB) in the form of a swap arrangement. CDB and China EXIM Bank also hold the bulk of loans for large infrastructure development projects in Sri Lanka.

“Allowing greater flexibility of exchange rates would provide important insulation against adverse external shocks as well as helping protect and build international reserves. In this context it would be beneficial to develop a plan to transition to a more flexible exchange rate regime with inflation targeting as a monetary policy,” Lee went onto say, reiterating the IMF recommendation.

The IMF also warned that growing global uncertainty along with a probable Fed rate hike later this year would make it more prudent for the Government to be bearish on growth targets. Lee noted that 2015 growth could slow to 4.5% while 2017 growth could be 4.8%, markedly less than Central Bank projections of 5.3% and 6% respectively.

“We believe the current monetary policy stance is about adequate. Given global uncertainty we think it is important to be prepared in case things turn out to be not so favourable, there will be willingness and preparedness to take necessary monetary policy decisions, including the possibility of further tightening….. more emphasis is on the readiness to act if necessary.”