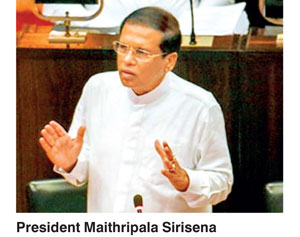 President Maithripala Sirisena urged lawmakers yesterday to support his Government’s efforts to draft a new constitution and made a strong case for international trade agreements he said would be important to the country’s economic development.

Addressing Parliament during the budget debate on the Ministry of Defence, President Sirisena asserted that national security remained a matter of paramount importance to his Government. He also urged lawmakers not to stoke unfounded fears about trade agreements Sri Lanka was planning to sign – in an apparent reference to the proposed Indo-Lanka Economic and Technical Cooperation Agreement.

There was no cause for concern, the President explained, because all these agreements would be put before the Parliament before they were signed. “Any disadvantageous clauses of tehse agreements can be discussed and amended at that stage,” he said.

He claimed that certain political forces were attempting to create conflicts between communities by spreading false information that national security was at risk. “We have not decreased any national security measures. I am concerned about this misleading information, especially about the new constitution, which is still at discussion stage,” the President said. IT was the second time he had made a strong case for the new constitution in Parliament in one week.

“Even before the draft is compiled the reforms are being opposed,” he charged.

“No firm agreements have been reached on the constitution yet,” he explained to lawmakers. He said that Sinhala Buddhist people were not racists and added that there was no need to create tension regarding the new constitution.

The President also reminded the House about the importance of the country’s international relationships. Foreign policy had an important role to play in national security as well, the President emphasized during his speech yesterday.

“The LTTE war led us to war over 30 years and we remember the stance of the international during the conflict. Some supported the LTTE and some did not. But overall, it is helpful for the country to win the hearts of the internationals,” President Sirisena said.

Responding to critics who question his Government’s achievements over the past 22 months, he said Sri Lanka needed to become a new country with international support. “So, as a new government we had to meet many leaders and make some sacrifices. We asked for a clean slate to start anew. So, today we have a strong international relationships and a stable political condition in the country,” he claimed.

“But we should not leave room for wars in the future, President Sirisena said. (AH)