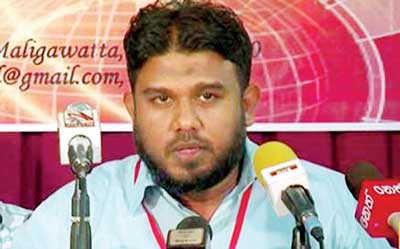 The arrest comes in the wake of threats by notorious Bodu Bala Sena Chief Galagodaththe Gnanasara Thero, who promised to attack the majority Muslim suburb of Maligawatte if the IGP failed to take the Secretary of the SLTJ into custody.

“If this dog is not arrested in 24 hours, we will begin from one corner and hammer Maligawatte,” the Bodu Bala Sena General Secretary told a small crowd on Tuesday night, referring to Razik. “We have tried to sort these issues out through discussions. Now it is time to sort it out with blood, stones and poles,” he charged in a video released online yesterday.

SLTJ held a protest and a press conference last week, demanding the Government cease efforts to reform the MMDA and strongly supporting retaining provisions which stipulate the minimum age of marriage at 12 years old. During the protest, Razik spoke in disparaging terms about Buddhist hardline groups like the BBS, and especially its General Secretary Gnanasara Thero.

In a statement issued yesterday, the Police Department said the Maligawatte police arrested Razik on charges of insulting a religion and angering a devotee during the protest. A Colombo magistrate remanded Razik till 29 November after police produced him in court following the arrest.  Senior lawyer Maithri Guneratne told reporters outside court that Razik had been arrested based on complaints lodged by the “persons wearing saffron robes”. Attorney Guneratne said this ‘bhikku’ was roaming free while insulting the police and the judiciary, but when his organization made a complaint, the police were swift to act.

“There were no anti-religious sentiments expressed by Razik,” Guneratne claimed.

Police action against the Thawheed Jamath General Secretary follows the arrest of Dan Priyasad, a Sinhalese hardliner who incited violence against the Muslim community at a protest in Colombo Fort recently. Priyasad’s hate speech and incitement was recorded and the video went viral on social media. Priyasad who is leading an outfit calling itself the “saviour of Sinhalese” threatened death to Muslims.

Gnasara Thero made dire threats against the Muslim community living in Maligawatte in an attempt to calm his supporters who were furious about Priyasad’s arrest. The Bodu Bala Sena Chief claimed that he was “talking to lawyers” to get Priyasad released by the courts.

Civil society activists are also raising concerns about a resurgence of hate speech directed at ethnic and religious minorities, after a Buddhist monk in Batticaloa issued death threats against a Tamil Grama Sevaka officer in foul language. The outburst by the Chief Incumbent of the Mangalaramaya temple in Batticaloa Ampitiye Sumangala Thero, who used racial slurs and profanity against the public officials, occurred in the presence of a senior Police official. The verbal onslaught has also been captured on video and shared widely on social media. According to Tamil media reports, the monk’s anger against the Pattipalai Divisional Secretariat officials stemmed from a controversy about land encroachment, allegedly by Sinhalese residents. Grama Sevakas attached to several Divisional Secretariats in the Batticaloa district, including Pattipalai, Koralaipattu and Eravur engaged in a black ribbon protest yesterday to demand action against the Mangalaramaya monk.

Speaking to Daily FT, Director of Government Information Dr Ranga Kalansooriya said these incidents “could not be tolerated” and pledged a “proper judicial procedure” to address the Batticaloa incident and sentiments expressed by the Bodu Bala Sena. “Within two to three days, the Batticaloa incident will be reported to court and a legal process initiated,” the senior Government official added. All perpetrators would be treated equally before the law and the Government would take action to curb hate-speech that was threatening the security of ethnic and religious minorities, Dr. Kalansooriya said.

The spate of incidents has sparked fears about continuing impunity for Buddhist clergy despite provocative conduct that threatens the security of religious and ethnic minority communities in the island. In a strongly worded statement issued on Tuesday, the Centre for Policy Alternatives expressed deep concern about the recent spate of events that it said held ominous portents for ethnic and religious harmony and reconciliation in Sri Lanka. “This poisonous atmosphere of ethnic and religious hatred is compounded by suspicion and rumours of collusion and political machinations, and most regrettably, by the appearance of indifference or at least a lack of capacity on the part of state institutions to enforce the rule of law without fear or favour,” the CPA said in its statement.

CPA said that especially where members of the clergy are involved in such incidents, police and civil servants have succumbed to a culture of deference rather than restoring order.

Addressing the Cabinet briefing yesterday, Media Minister and Cabinet Spokesman Gayantha Karunatillake said the attempt to incite ethnic and religious tensions had been taken up at the Cabinet meeting on Tuesday. The Minister said that the incidents had been brought to the attention of the President and the Prime Minister, and vowed that the incidents will be dealt with under the law.