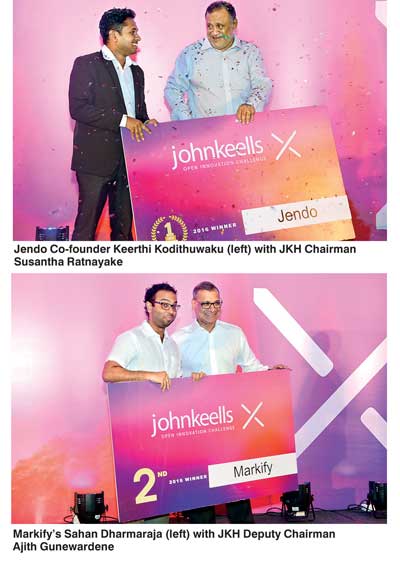 The winning team Jendo, comprising a group of young engineers and doctors who designed the groundbreaking cardiovascular monitoring system, walked away with a cash prize of Rs. 2 million, while Markify came in second to claim a cash prize of Rs. 1 million for its innovative analytics platform.

Explaining its product to Daily FT, Jendo Co-founder Keerthi Kodithuwakku said that it is a cloud-based application that maintains user profiles. The service can be shared with medical laboratories (without selling them the device) around the country which can use the data to run their own tests, Kodithuwakku said.

“The data has huge value in terms of digital health. Digital health is a growing field in the world. This product has global potential,” he said.

Kodithuwakku’s confidence in his team’s product is rivalled only by his ambition.

“For example, there are 7 billion people on the planet and about 20% of them have diabetes. This has billion-dollar potential,” he said.

The fledgling startup has had discussions with “big players” in Japan. They’ve talked to Google, too.

The team, some of whose members are from Moratuwa University, has gone through a rigorous testing and evaluation process with its senior-most professors, with improvements added from the University of Colombo Medical Faculty. The Science Foundation too has given them a grant, said Kodithuwakku, who himself is an electronic and communications engineer who graduated from Moratuwa University.

“We started our company during our undergraduate studies. I run another company to generate revenue to fund this,” he told Daily FT.

Spearheaded by Sahan Dharmaraja, the Markify analytics platform with data ingestion capabilities is completely voice-controlled and brings in a new dimension to analytics and big data.

“You don’t need to be technical; there is no need to spend a lot of money, it runs on the cloud. Just tell the system what you want and it’ll give it to you. Just like that,” Dharmaraja told Daily FT.

“Whether it’s from data you’ve already acquired or whether you want something from Amazon or eBay, Facebook or Twitter, just tell it what you want. It’ll find it, it’ll bring it over and it will analyse it for you,” he added, explaining the product.

Businesses can use the service to make better, more informed decisions, with faster and easier access to data that might otherwise require technical expertise to obtain.

In terms of funding, Dharamaraja and his team are having discussions with different parties.

“Sri Lanka is a tough market to crack. We met with a lot of businesses during the course of this program and a lot of them have expressed interest. So now it’s about showing them what we showed today and hoping for the best,” he said.

According to a statement issued by JKH, the four-month Open Innovation Challenge was launched in June 2016 to encourage innovators with imagination and a strong design ethic to take the next step in making a pipeline idea a reality.

Through the competition, John Keells X called for individuals and teams to submit applications online. 148 applications were shortlisted to 10, followed by an Open Day where the teams were formally inducted to the competition. The 10 teams were given a development window of 60 days, during which time they were also given the opportunity to meet and interact with their peers and to network with JKH leadership through a series of events.

Speaking to Daily FT, JKH Deputy Chairman Ajit Gunewardene said it was difficult to pick a winner from the finalists.

“Essentially this is about supporting the young tech entrepreneurs and creating the ecosystem of a startup economy. There is a lot of talent in this country and it was very apparent in this whole process we’ve gone through,” he said.

Corporates should continue to support and bring innovators to the forefront Gunewardene said, adding that this would prove beneficial to the country’s economy.

“One of the key things is that they lack funding. It’s very important that we feed that innovation, and the innovation should be fed with no strings attached so that they can continue to improve and expand on what they’re doing,” he said.

There was some controversy recently surrounding a hackathon organised by a large corporate entity where contractual obligations placed on contestants were so tight that they barely had room to breathe. When asked if there were similar restrictions on John Keells X participants, Gunewardene said that the support and mentoring received by contestants came with no strings attached.

“There are no contractual obligations. It was simply a process of us mentoring and supporting with no obligations to JKH,” he said.

“Over four months, the participants were mentored by key members of the John Keells group, giving them input from a business sense in structuring, presentation, etc. which helped them come up with their final presentation. Absolutely no strings attached,” he reiterated.

“JKH was really supportive. They saw the potential. They guided me a lot to improve my presentation and business angle,” said Kodithuwakku of Jendo.

“We have complete independence. We have total control,” he added.

When asked if JKH would continue to support these innovators, Gunewardene said his company would be happy to do so on what he called an arm’s length basis.

“As far as we’re concerned, it’s up to these guys. If they want, we’re very happy to continue to mentor them and to guide them. If they’re looking at more investment, it’s something that we will consider but that’ll be on an arm’s length basis, based on what the parties want. We will help them take the next step using our base of expertise and talent pool, if they so desire,” he said.