Home / News/ Theravada Buddhism is the only religion that heals restless minds: President

Theravada Buddhism is the only religion that heals restless minds: President 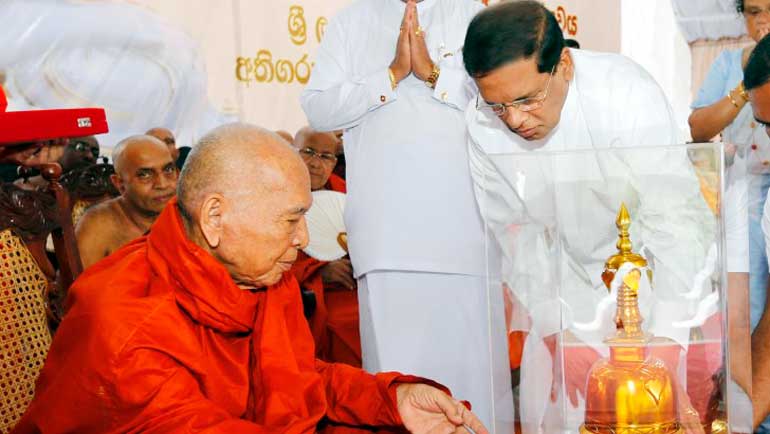 President Maithripala Sirisena says that the Theravada Buddhism is the only religion to heal the restless minds of the people who are living in this stressful contemporary society.

The President was speaking at the religious ceremony to open the newly built shrine room at Sri Salawana Bodhi Vihara in Polgolla. The marble Buddha statue, brought from Myanmar has been placed in this shrine room.

He noted this would be another opportunity to strengthen the relationships between Sri Lanka and Myanmar lasting for centuries. He assured that further steps would be taken to develop the relations between the two countries.

After offering poojas in the new shrine room, the President offered ata pirikara to Maha Sangha. He offered gold colored replica of a Stupa to the Sangharaja of Myanmar Most Ven. Kumarabhivanshabhidana Maha Nayaka Thero in honour of his services to the Buddhism. The Maha Nayaka Thero presented a Buddha statue, brought from Myanmar to President Sirisena. 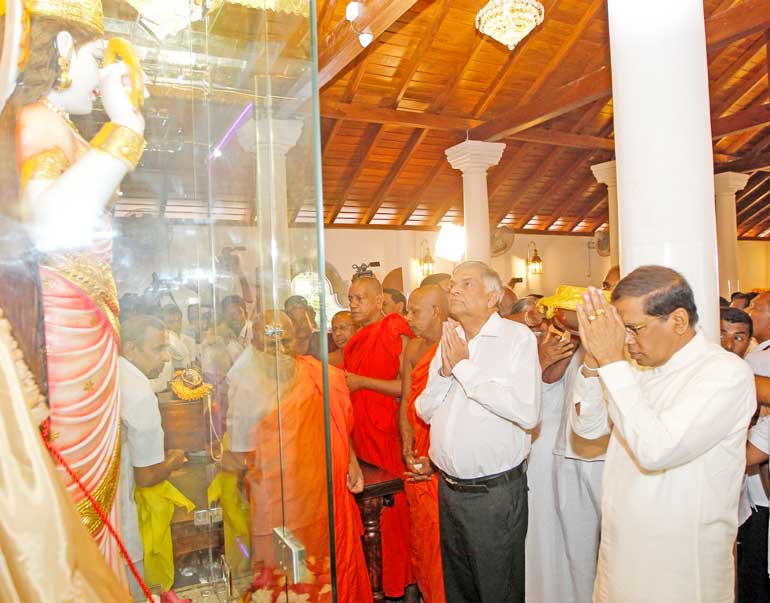 President Maithripala Sirisena yesterday unveiled the life-size marble statue of the Goddess Paththini brought from India to Nawagamuwa Purana Sri Maha Paththini Devalaya following a complete renovation of the Devalaya after the hundreds of years for the public to worship.

The President, following inquiries into the wellbeing of the Chief Incumbent and offering pirikara, joined in the unveiling of the statue of the Goddess Paththini for public worship. After unveiling the statue the President offered the first floral tributes to the statue.

The Maha Sangha including the Most Ven. Ittapana Dhammalankara Anu Nayake Maha Thera, Prime Minister Ranil Wickremesinghe, Ministers and MPs including Susil Premajayantha, Lakshman Kiriella and A.H.M. Fowzie, businessmen Nandana Lokuwithana and Dhammika Lokuwithana who provided financial assistance for the renovation works of the Nawagamuwa Purana Sri Maha Paththini Devalaya and many others participated in this event.