Home / Opinion and Issues/ Post-war voices from the north

Post-war voices from the north 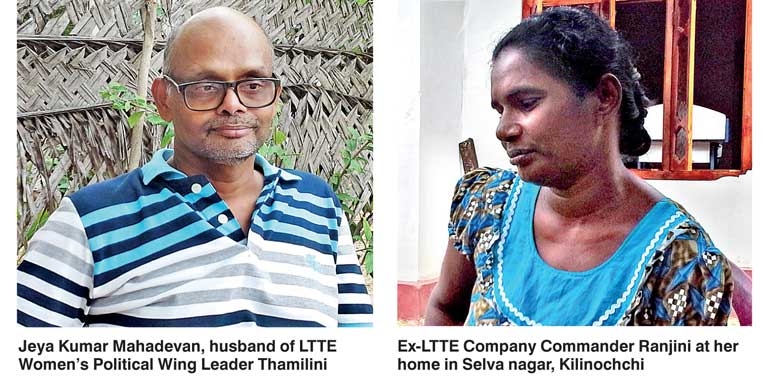 Jaffna, Kilinochchi, Mullaitivu: Rajini is 46 years old and an ex-LTTE Commander with a 10-year-old daughter. She is a widow. She has few visitors. Tamil politicians are rarely among them.

Occasionally she chases off military officers who enter her premises in her absence and make themselves at home for hours in her garden. She flies into a rage at them. She informs them that they have no right to enter her garden in her absence. They accept, grin, make some lame excuses and good-naturedly lope off after the cursory examination of the military reference documentation that is as important for ex-militants in post-war times as it was for civilians in peace times.

It is peace. At least there are no gunfire now. Of the memories of fire that continue to burn in hearts and minds we do not know.

Rajini tears as she recounts the death of her father, brother and husband during the different stages of the 30-year-old civil war. She halts at times. The shrapnel embedded in her body scrapes against her flesh. She feels the pain. I who listen to her can only guess.

I am seated with her in her garden and her 10-year-old daughter sits beside her. The purple ink in my pen fades to a full stop. Her daughter looking over my shoulder, disappears and reappears with a pen exactly that shade.

It was this girl, who was then three years old, who had bought bread and water and got the attention of medical authorities, when her mother was lying in pools of blood in the garden compound of the hospital; the immediate post-war amphitheatre of horror that was Mullivaikkal.

“Hundreds of people were lying in blood in the garden. The hospitals were overflowing,” reminisces Rajini.

Having joined the LTTE in 1987, she had left the movement in 2000, marrying LTTE cadre Sudhan in 2001, who surrendered to the Government military just before the end of the war. She ensured that she handed over her husband to the military. The military has not ensured the same. To date she has no news of her husband. He is assumed to be dead. How, no one knows.

Today she lives the life of a widow. Her house in northern Kilinochchi has been built with assistance from various well-wishers, including the Northern Provincial Council Chief Minister and UN Habitat. Apart of the Chief Minister who has offered her assistance at a time when it was much needed, she cannot say the same for the other politicians, vociferous female human rights campaigners and members of the TNA she hasn’t seen ever since the war ended.

Although her life is normal, in the ordinary sense, her stamp as a former cadre remains. In a general sense. Especially in Jaffna, those who used to stand in queue to meet her during the war when she held high office as a LTTE Leader avoid her now.

Yet, she knows that it could be worse. She could have been one of the hundreds of detainees, most of them held without charge.

“Reconciliation is a much-hyped word. It is discussed by elitist NGO and political opportunists. It survives in AC rooms in Colombo and roams aimlessly in minds of people. As to whether it is transferred to the minds of the Tamil and Sinhala people who suffered during the war, families of those in the LTTE and Army who dies in the war, the people who speak of reconciliation will have to examine…,” says Selvarasa Karunakaran, a former member of the LTTE’s Media Unit.

He is today a poet and author, leading a frugal life in order to publish his writings in a backdrop where there is no market for books and where Tamil writings of authors in the north hardly ever reach the eyes and minds of the Sinhalese community. There is yet to be a consistent and constructive NGO or Government venture focusing on regular publishing support for reconciliation through literature.

“If I publish 500 copies of a book, I will be lucky if I sell a total of 200 copies in the whole of the north east. People are struggling to afford even a meal a day. Where do they have money for books? Where can professional and amateur writers who want to write on their experiences on the war get published?” he queries.

Thamilini and her biography

The common feeling in the north is that in order to reap reconciliation there should have been, soon after the end of the war, a genuine attempt, to build trust between the State and the Tamil people. Prolonged stay in the north shows that Government support, or consistent support for ordinary civilians, especially youth, to engage in meaningful socio-economic and socio cultural activities in order to rise above the Sinhala and Tamil chauvinism, is below minus.

There are, however, many attempts by ordinary northern and southern citizens to speak of the uselessness of war, write about the human suffering war and engage themselves in discussions with individuals who could make a change to see that Sri Lanka’s past does not affect its future.

Jeya Kumar, a British national who had to bear the loss of his wife’s life this year to cancer, is using her life and memory for reconciliation, earning for his initiative, both brickbats and bouquets.

Having laboured to get the book ‘Thiyunu Asipatha Sevana Yata,’ the Sinhala version of the original Tamil language biography of Thamilini which reads in English as ‘In the Shadow of a Sharp Sword,’ completed by her just before her death and published soon after her death, Jeya Kumar was rewarded with a host of speculation and criticism by some Tamils for his efforts to make immortal his wife’s contribution towards reconciliation.

The book, which was largely misunderstood by both Tamils and Sinhalese as a criticism of the LTTE, remains a work that could be misused as a weapon to create more unrest and it remains also a work that could be used with wise introspection to understand the words, life and circumstance of a daughter of Sri Lanka pushed to war because of mistakes of cheap-minded politicians.

The biography of Thamilini has the danger of being used by certain Sinhalese for pushing forward various ideologies that are connected with absconding from the collective responsibility of war time accountability. And it can be used by closed minded Tamil chauvinists who want to remain tunnel-visioned.

The book ‘In the Shadow of a Sharp Sword’ is an honest account of what attracted Thamilini as a young girl to LTTE and what led to her alienation from it and the mind reading the book could make parallels to the alienation Thamilini felt from a politically non-accommodating Sri Lankan State and the military atrocities that made her join LTTE, in the same manner that the LTTE atrocities that were committed in the last phase of the war made her ‘betray’ the movement to use a jargon someone critical of her views would use.

She is honest about her admiration of Prabhakaran as a military strategist and leader and for his devotion to the Tamil cause but traces the facts where under the influence of Pottu Amman (the LTTE Intelligence Chief) where Prabhakaran got alienated from his commanders, cadres and people, becoming intolerant, suspicious and politically and militarily unrealistic. The end of the LTTE that she describes is one where the people’s plight were ignored and only the LTTE’s interests mattered even at the cost of Tamil civilian lives.

At the end of her detention and successful legal representation by her Sinhala and Tamil lawyer respectively, Thamilini was rehabilitated by the State and allowed to lead a civilian life after marrying Jeya Kumar, a British national who left Sri Lanka prior to 1983 and had no association with the rebels, nor did he share the same ideology as the LTTE movement.

“Thamilini did not mind that my views were far different to that of the LTTE,” says Jeya Kumar.

“When she was in detention I followed the normal Tamil custom in proposing marriage and sent my photograph to her mother for her approval and wanted to find Thamilini’s response. Thankfully she agreed to marry me. Many people go through life without knowing the holistic meaning of love. It is this love Thamilini had for the people trapped in Sri Lanka’s post war context that made her write her book,” he says.

‘Under the Shadow of a Sharp-Edged Blade,’ the autobiography by Thamilini published posthumously in Sinhala and Tamil, had acknowledged that the LTTE shot at civilians who were trying to escape the last phase of the fighting to get to the military controlled areas,” says Jeya Kumar, who denies that there was any coercing or luring by the military or any affiliated persons to write the book.

He says that it was the voluntary intervention by a Sinhalese human rights activist, Ruki Fernando, who had got to know that the military had asked for the copy of the book prior to launch and objected to photographs of the LTTE movement and took steps to see that the launch was not obstructed because of this.

“The book launch in Kilinochchi was avoided by TNA members and most prominent Tamil nationalists. If we are to look at aspects of truth and justice, then we have to be honest. It is this honesty by Thamilini that is reflected in the book written by her at an attempt at reconciliation between the Tamil and Sinhala community,” he explains.

Jeya Kumar is happy with the sales of the Sinhala version of the book, which is on the seventh edition, having printed 7,000 copies within a span or around three months, surpassing the number of Tamil copies sold which is currently at 3,000 and is at the third reprint.

This article will continue where the next sequence will look at Sinhala and Tamil narratives towards reconciliation from the north and Colombo.