Pressure mounts as online appeal to President and PM gets 15,000+ signatures to date

The demand for the closure of the Dehiwela Zoo has gained fresh impetus with more than 15,000 people so far endorsing a call to give the animals a life they deserve, ending long years of suffering in small, filthy enclosures. The appeal was posted on www.otarafoundation.com.

Giving new life to a growing demand of animal lovers and rights activists, the Foundation has submitted a three-point appeal to President Maithripala Sirisena and Prime Minister Ranil Wickremasinghe covering the closure of the zoo, and addressing longer-term issues represented by its existence.

Titled ‘Free the innocent’, the appeal calls for a rescue and rehabilitation plan with a clear timeline for the release of the animals; the conversion of the premises for alternate public use – a park and botanical garden that protect the valuable flora on the site and provide skilled employment to the zoo employees; and a commitment to provide Sri Lanka’s children with the right education in conservation and compassion. 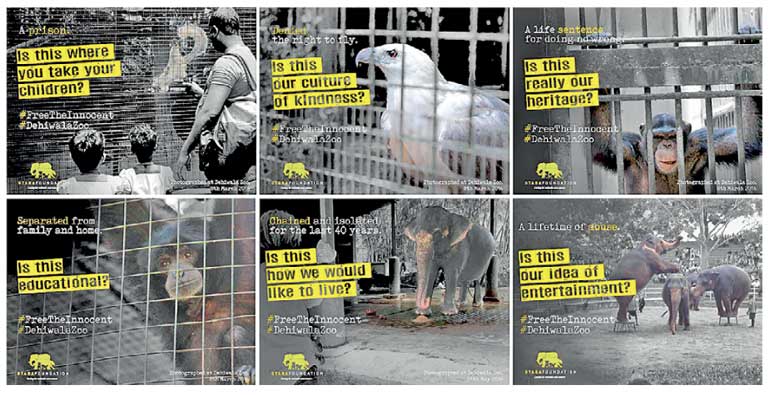 Accompanied by a series of shocking recent images from inside the Dehiwela Zoo and details of the suffering faced by the animals, the appeal stresses that it is time for the Sri Lankan government to stop exploiting Sri Lanka’s children in order to keep the zoo in operation. Officials have consistently claimed that the zoo is required for the ‘education of the children of Sri Lanka’. The appeal counters this assertion explaining that seeing suffering animals cannot be considered an education. “Instead, we request that you consider giving all our children the right education, with kindness, compassion and respect for life at its core,” states Otara Foundation Director Otara Gunewardene.

To tout the zoo as an ‘educational’ institution for our school children is to cheat them of their right to a suitable education that provides accurate and vital information on the importance of species conservation and compassion, the appeal points out. Even if a part of the population believes zoos should exist in the current condition and purely for the profit and use of humans, it is the duty of the Government to follow the true principles of Sri Lanka where all lives deserve to be happy and free, it asserts.

The appeal highlights numerous cases of appalling cruelty, negligence and inadequate care that contribute to the immense suffering of the animals at the Dehiwela Zoo. “In the face of inaction, the animals at the Dehiwala Zoo continue to suffer in silence: some visibly in pain from injuries and illness; some in cramped or over-crowded conditions; some in solitary confinement; some in spaces so constrained that they can barely move; some tied to the same spot for decades; some in concrete pits; some separated from their new-born offspring; many without adequate food or water; and all visibly distressed and depressed,” the appeal states. It cites the case of a chimpanzee with no mental stimulation that has spent more than 40 years in a concrete cage; of Indi the elephant that has been chained to the same two posts for 40 years; of Joa the African elephant who has been chained in place since 1995; large numbers of owls, eagles, kites and other birds cramped in small spaces denied the right to fly; and performing elephants who till recently were forced to stand on their heads to entertain visitors.

The appeal argues that “the time is now for us to closely examine our own heritage and revisit sustainable models of wildlife conservation established by our ancient monarchs. While the world is waking up to the disastrous and cruel realities of keeping captive wildlife and the need for better methods of species conservation, Sri Lanka cannot continue to reject the need to do so.”

A series of posters produced by the Foundation in support of its campaign asks several thought-provoking questions: Is this our idea of entertainment? Is this educational? Is this where you take your children? Is this our culture of kindness? Is this really our Sri Lanka? Is this really our heritage? Armed with the right knowledge more citizens are now demanding to live in a country that cares for all lives and are standing behind the appeal.

The Otara Foundation’s online appeal for the closure of the Dehiwela Zoo may be signed by anyone anywhere in the world by visiting the Foundation website at https://www.otarafoundation.com/?actnow=actnowtofreetheinnocent.