The Government hopes that White Papers on two key pillars of Sri Lanka’s transitional justice process, outlining the basic structures of a truth and reconciliation commission and a special accountability court will be ready by September 2016 and February 2017, Foreign Minister Mangala Samaraweera announced yesterday. 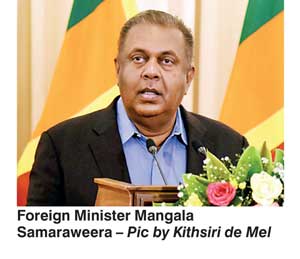 Addressing a media briefing at the Ministry of Foreign Affairs yesterday, Minister Samaraweera who returned from Geneva on Friday (1), where he attended the 32nd session of the UN Human Rights Commission, said the Government expects the basic framework of a truth commission – the truth-seeking mechanism – to be ready for discussion in Cabinet by September this year.

“By January or February 2017, we expect that the basic architecture of the Special Court for accountability should be clearer and ready for discussion,” Minister Samaraweera told reporters at the Republic Building last morning.

Minister Samaraweera stressed on the importance of establishing the chain of command responsibility in accounting for large-scale human rights violations and allegations of war crimes committed during the final stages of the war.

“There is a perception across the world that the Sri Lankan military is an honourable and dignified force. Our soldiers are not so warped to go around killing civilians. That is why the chain of command must be investigated. I believe the most important thing to find out is who gave the orders,” the Foreign Minister charged.

He also admitted that the question of foreign judges was a polarising facet of the special prosecutorial process to investigate alleged war crimes. “The President and a large section of people believe our judges can do the job. On the other hand the TNA insists on the necessity of foreign judges. I believe there is a middle ground to be found here,” Minister Samaraweera added.

He said the framework and structure of the special court would ultimately depend on the outcome of the consultations process the Government is currently pursuing as it sets about establishing the four-pillared transitional justice mechanisms.

Minister Samaraweera also noted that during his most recent visit to Geneva, he had observed a “sea-change” in the attitudes of the Tamil diaspora organisations towards Sri Lanka’s reconciliation efforts. The Minister said the Sri Lanka delegation had organised an event on the sidelines of the UNHRC session last week with civil society organisations on every side of the spectrum, including extremist Tamil groups.

“In our discussions, even they said it was the first time the Sri Lankan Government had engaged with them in frank and open discussion. We don’t agree with everything they say, but we are not averse to listening and we are ready to have civilised discussions even with those who hold opposing views,” the Foreign Minister said.

Minister Samaraweera added that he had invited representatives of those organisations to visit Sri Lanka and assess the ground situation in the country for themselves. “There is no longer a ‘shoot the messenger’ policy in Sri Lanka. So these groups can come to the country and observe, rather than merely criticising from overseas. We have invited them to come,” he explained.

Harking back to history, Minister Samaraweera recalled that the day after Sri Lanka achieved independence in 1948, editorials were written in British newspapers, predicting that Ceylon would become the ‘Switzerland of the east’ because of its strategic location and its vast natural and human resources. In 1965, Lee Kwan Yu was determined to make Singapore catch up to Ceylon, he said. “Yet here we are, after a 30-year war, still writing editorials spewing racial hatred,” Minister Samaraweera said.

“So much opportunity and potential was lost to us for 68 years because we allowed a small language issue to become a brutal war and pushed moderate Tamils into the embrace of a brutal terrorist organisation,” the Foreign Minister noted.

To move forward as a country, Sri Lanka had to understand what happened in the past, he added.

Minister Samaraweera also denied that there was a political crisis inside the ruling coalition, saying there was no tension between President Maithripala Sirisena and Prime Minister Ranil Wickremesinghe. “Theirs is a strong friendship and they remain committed to take the country forward together,” the Foreign Minister claimed.

AFP: Sri Lanka intends to become completely demilitarised by 2018, the government said Wednesday, a significant announcement that will end the army’s involvement in civilian life after decades of ethnic war.

Heavy deployments from the Sri Lankan army have remained in former war zones in the island’s north and east since a 37-year conflict with Tamil separatists ended in May 2009.

The military is also deeply involved in private enterprise, running everything from beauty parlours to businesses selling vegetables and fish, in competition with small-scale vendors.

“By 2018, we hope to complete the demilitarisation process, not only in the north-east, but the rest of the country too,” Foreign Minister Mangala Samaraweera told reporters in Colombo.

“We have also asked the military to disengage from all commercial activities they are engaged in,” Samaraweera said.

The UN Human Rights Council has repeatedly asked Sri Lanka to reduce the military’s involvement in civilian life and restore normality to the war-torn regions.

At least 100,000 people died in Sri Lanka’s drawn-out separatist campaign, led by Tamil Tiger rebels who fought for an independent state within the majority Sinhalese island.

After the war ended, former president Mahinda Rajapakse deployed the army to operate luxury hotels, restaurants, farms and engage in retail trade.The move forced many small-scale vendors out of business, as in the case of the Sri Lankan airforce run beauty parlour offering cheaper services that undercut private barbers.

Samaraweera said the military had already given up some of the businesses they were engaged in, adding that there would be a complete disengagement by 2018.

He added that the government has replaced former military top brass with civilian governors in two embattled provinces.

The government has begun a process of handing back some military-occupied land to its original owners.

It is also making efforts to trace thousands of people who went missing during and after the war and pay reparations to victims of the conflict.

Sri Lanka’s government has been praised for agreeing to investigate allegations that up to 40,000 ethnic Tamils were killed by troops in the final months of fighting in 2009.

However, its slow progress on probing the deaths has also drawn criticism.