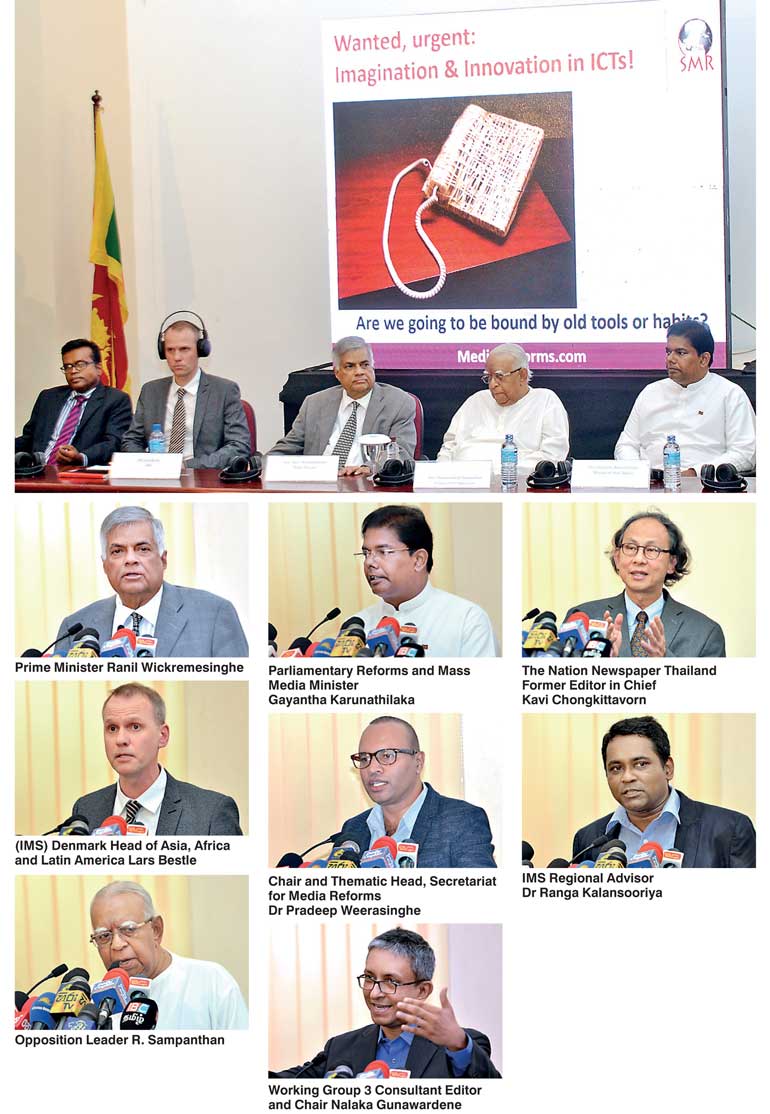 Prime Minister Ranil Wickremesinghe has called for introspection by the country’s mass media on World Press Freedom Day which was celebrated globally yesterday, in a speech that urged journalists and editors to decide if they wanted to go back to the ‘dark ages’ or see the quality of their freedoms enhanced through democratic reform.

Prime Minister Wickremesinghe, Opposition Leader R. Sampanthan, Media Minister Gayantha Karunathilake and Deputy Media Minister Karu Paranawithana attended an event held to mark World Press Freedom Day and to present a study report by the Secretariat on Rebuilding the Public Trust: An Assessment of the Media Industry and Profession in Sri Lanka, organised by the Secretariat for Media Reforms and International Media Support.

Addressing a large gathering at the Lakshman Kadirgamar Institute of International Relations and Strategic Studies, Prime Minister Wickremesinghe said the Government had introduced the Right to Information Bill as a measure of its commitment towards a free press ahead of World Press Freedom Day.

“The Government is doing what it can to enhance media freedom. No doubt there are shortcomings on our part as well. But it is up to the media now to regain the public trust and make a decision as to where they stand on the issue of press freedom,” the Premier explained.

He criticised the Sinhalese press for fear mongering about an LTTE resurgence and demonising disappeared journalists like Prageeth Ekneligoda as being Tiger supporters.

“I asked the Police if there was any truth to these claims about LTTE resurgence. They have denied it. I also asked military intelligence about these claims. They have also assured me that no such threats exist – so why is this spectre being raised?” Wickremesinghe charged.

Referring to Opposition Leader R. Sampanthan’s speech shortly before his own, the Prime Minister said the TNA Leader had noted 12 journalists killed in the Northern peninsula in recent times.

“Okay, let’s forget about the Jaffna journalists – the attitude in the South is that they are Tamils and so what do their deaths matter – this is the unpleasant truth and it must be spoken,” Premier Wickremesinghe said, adding “but what about Prageeth Ekneligoda? What is his crime? How has he been dubbed by the Sinhala Buddhist media as LTTE?”

The Prime Minister said that it seemed it was journalists and editors who were most disinterested in media freedom.

“The decision on where the press stands on the issue of press freedom must be made inside newsrooms and at the Editor’s Guild,” he said, criticising the media for fear-mongering and failure to back progressive reform.

He said the new constitution would comprise a strengthened Fundamental Rights Section and greater freedoms for the country’s press.

All the while, the media seemed adamant to return to an age when the press freedom was restricted and journalists were under siege, the Premier said.

“As a Government we are fighting for press freedom. But it appears today that it is the media that is saying it doesn’t want these freedoms,” Wickremesinghe said in an apparent critique of several media organisations strongly backing a return of the Rajapaksa regime, during whose tenure Sri Lanka hit the bottom on global press freedom indices.

Opposition Leader Sampanthan, who also addressed the gathering, said that the media was one democratic institution that could shape the future of a country.

“Wherever democracy has flourished, there has been an independent press. A courageous media is a pillar of democracy and every journalist is a brick in that pillar,” the Opposition Leader said.

He said it was a matter of great regret that violence against journalists in the recent past remains unaddressed, despite the fact that a new Government was in place.

Sampanthan said that Sri Lanka has never had a constitution based on a consensus of its people, and added that the role of the media was crucial to this process. “The media should be truthful, and independent in reporting this process,” the Opposition Leader said.

“The new Supreme Law will determine if different people who live in this country can be constituted as a single people who will live as Sri Lankans,” the Opposition Leader emphasised.

“Sri Lanka has failed so far to produce a coherent media culture that fosters reconciliation and democratic reform,” the Media Minister said.

The keynote speaker at yesterday’s event was former Editor in Chief of the Nation newspaper in Thailand, Kavi Chongkittavorn. 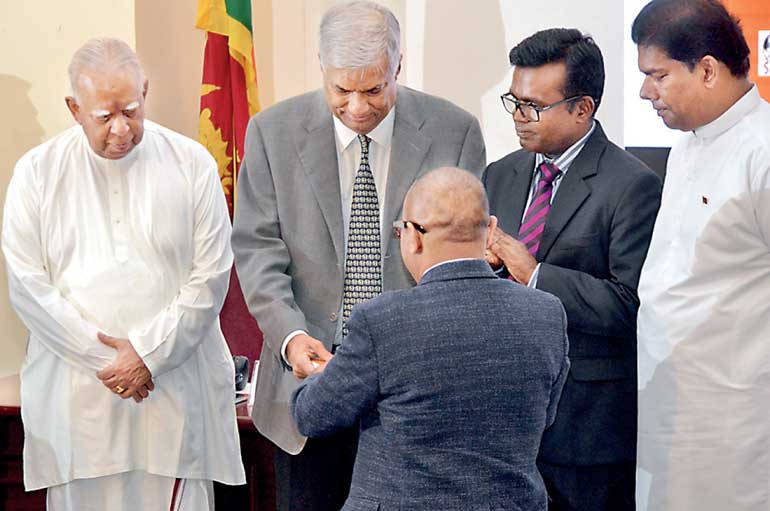 Key recommendations include self-regulation and media training and education

The Government and media industry need to embark on wide-ranging media sector reforms, according to a major new study released by the Secretariat for Media Reform in Sri Lanka.

Such reforms were needed at different levels, in government policies, laws and regulations and also within the media industry and the profession, the report said.

Recent political changes have opened a window of opportunity which needs to be seized urgently, says the study report entitled Rebuilding the Public Trust: An Assessment of the Media Industry and Profession in Sri Lanka.

The report is the outcome of a 14 month consultative process that involved media professionals, owners, managers, academics and relevant Government officials.

Among the report’s main findings and recommendations, the need to match professional conduct by the media with recently enhanced press freedoms, legal reform to guarantee editorial independence and ethical conduct by the media, self-regulation for the media but only if the regulation can be enforced across the media industry, the establishment of an independent broadcast regulator and the need to turn the state controlled media into institutions of public service, with adequate funding and no political interference. The report also calls for media training and education that can meet modern media realities and technological challenges.