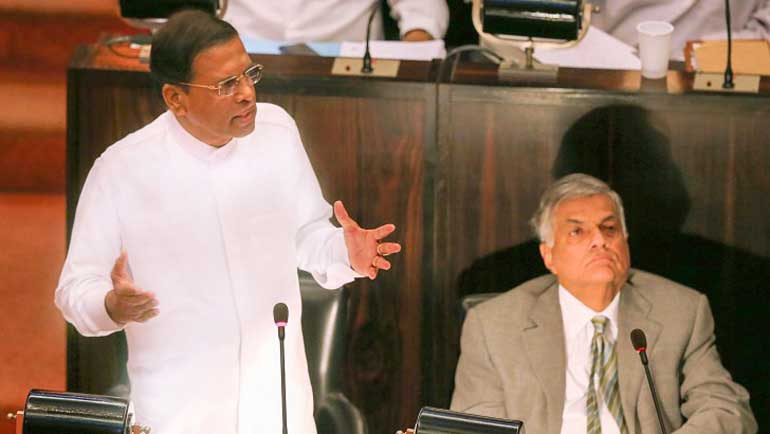 The Government on Saturday presented its plan for a new Constitution aimed at devolving power and preventing the sort of ethnic tensions that led to a long and bitter civil war that ended in 2009.

“The abolishing of the executive presidency, withdrawing the preference system and introducing a fairer electoral system, strengthening the democratic rights of the people and providing a constitutional answer to the national question,” said Prime Minister Ranil Wickremesinghe in parliament as he outlined the new Consti-tution.

The resolution for the appointment of the Constitutional Assembly presented by the Premier moved in the House at a special session and thereafter the House adjourned until 12 January.

The resolution proposes establishing a Committee of Parli-ament referred to as the Constitutional Assembly which will consist of all Members of Parliament, for the purpose of deliberating and seeking the views and advice of the people on a new Constitution for Sri Lanka, and preparing a draft of a Constitution Bill for the consideration of Parliament in the exercise of its powers under Article 75 of the Constitution. 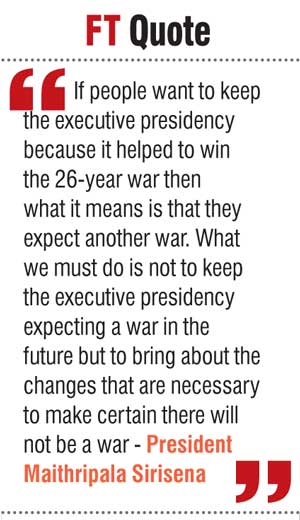 In the absence of the Speaker, the Constitutional Assembly shall elect one of the Deputy Chairmen to chair the sittings of the Assembly.

The Steering Committee will be responsible for the business of the Constitutional Assembly and for preparing a draft of a new Constitution for Sri Lanka.

It is said in the order paper for today that there is a broad agreement among the people of Sri Lanka that it is necessary to enact a new Constitution for Sri Lanka and the people have at the presidential election held on 8 January, 2015 given a clear mandate for establishing a political culture that respects the rule of law and strengthens democracy.

Furthermore, the President Maithripala Sirisena has clearly expressed his desire to give effect to the will of the people expressed at the presidential election by enacting a new Constitution that abolishes the Executive Presidency.

The Government said that it has become necessary to enact a new Constitution that abolishes the executive presidency, ensures a fair and representative electoral system which eliminates preferential voting, strengthens the democratic rights of all citizens, provides a constitutional resolution of the national issue, promotes national reconciliation, establishes a political culture that respects the rule of law, guarantees to the people’s fundamental rights and freedom that assure human dignity and promotes responsible and accountable government.

President Sirisena, who marked his first year in office on Friday (8 January), addressed the first session of Parliament in 2016 and criticised the hardline Sinhala Buddhist groups that want to keep the current Constitution.

“We must clearly understand our responsibilities. We must reject the extremism of the north and the south and take into account the views of the moderates,” he added.

The Constitutional Council will have a group of experts to advise it and will seek public representation in drafting the new Constitution, which will then have to be approved by a two-thirds majority in Parliament and at a national referendum.

According to the document presented to Parliament on Saturday, the Government intends to strengthen democratic rights, promote national reconciliation and establish a political culture that respects the rule of law. The new Constitution will also guarantee fundamental rights and freedoms that assure human dignity and promote responsible and accountable government, it said.

“The main idea is to devolve power to the grassroots level and strengthen democracy in order to prevent another war,” a ruling party legislator who is close to the president told Reuters, asking not to be named.

Some Opposition members, however, have alleged that the new Constitution has been drafted to please some Western nations and to dilute the main religion, Buddhism, in Sri Lanka. The Government has rejected such accusations.

Ethnic minority Tamils were often favoured for higher Government positions under British colonial rule. After independence in 1948, many lost their positions as successive governments pursued language and other policies favouring the majority Sinhalese population.

Tensions erupted into a fully fledged armed conflict in 1983 that only ended when government forces seized the last areas controlled by the separatist Liberation Tigers of Tamil Eelam (LTTE).

“The extremists in the south and the north have caused the loss of thousands of young lives...we must ensure reconciliation and harmony so that we will never go back to war. I believe now, through our past bitter experiences, we must prepare ourselves for future challenges,” President Sirisena told Parliament.

Over 3,200 complaints within 24 hours to ‘Tell the President’ line

The new service created by President Maithripala Sirisena for people to submit their complaints directly to him has received over 3,200 complaints within 24 hours of its launch, the President’s Office said.

The President on 8 January launched the ‘Tell the President’ program to mark one year of his presidency.

People can submit their complaints, suggestions, ideas and grievances directly to the President through the program via calls, emails, a dedicated website, SMSs and letters.

People can access the service by calling 1919, emailing tell@presidentsoffice.lk or visiting tell.president.gov.lk. They can also mail the submission to P.O. Box 123, Colombo 1.

The President’s Office promised that every submission would receive a quick response.