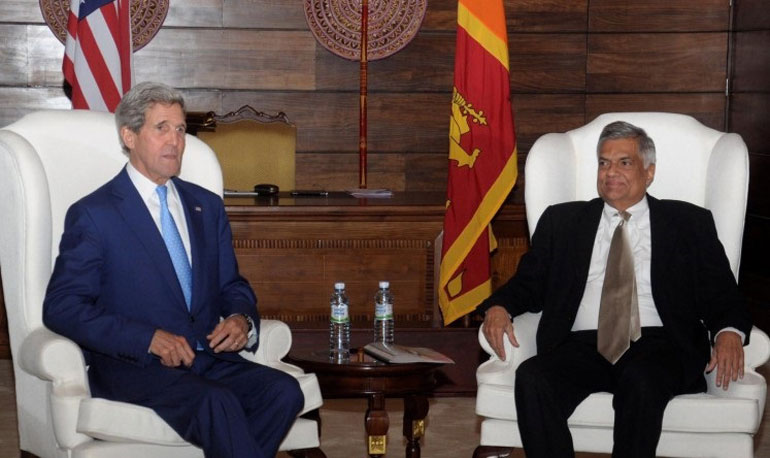 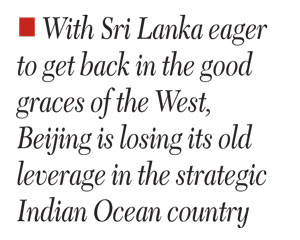 By Debasish Roy Chowdhury in Colombo

Far from the South China Sea’s unfolding turbulence, the calmer waters of the Indian Ocean are witnessing a more subtle geopolitical power play, in which China is losing its leverage over Sri Lanka to the United States.

The shift comes amid a raging domestic debate in the strategically located island nation over the investigation of atrocities committed during the country’s civil war, which ended in 2009.

A recent UN resolution called for a credible justice system to deal with crimes committed during the war.

A UN report preceding the resolution detailed “egregious violations” by both sides, including rape and torture of detainees, extrajudicial killings, recruitment of children in war and indiscriminate shelling of civilians. About 40,000 people are estimated to have been killed in the final months of the 26-year war.

Former president Mahinda Rajapaksa had wooed China - and relied on Beijing’s support in the UN to hold off any international probe into possible war crimes during the last phase of the conflict between the government and Tamil rebels.

But the new government that came to power after Rajapaksa’s ousting in January has implicitly accepted a degree of foreign participation in the justice process.

“The latest UN resolution has given the US and the West considerable leverage over the Sri Lankan government, which earlier counted on China, as well as Russia, in the Security Council to pre-empt US intervention,” said Dayan Jayatilleka, Sri Lanka’s former permanent representative to the UN.

“The US now has the asset of an elected government in Sri Lanka which has conspicuously distanced itself both from Beijing and its roots in the non-aligned movement, while equally conspicuously embracing the West. It is a political, diplomatic, strategic and propaganda victory.”

America’s insistence on an international probe came as Colombo’s tilt to Beijing became increasingly pronounced, with China financing the South Asian country’s post-war reconstruction with billions of dollars in infrastructure loans as well as buffering it from Western pressure in global forums.

That relationship began to change when a unity government replaced Rajapaksa.

“The new administration is eager to get back in the good graces of the US and other Western countries,” said Nilanthi Samaranayake of US-based research organisation CNA Corp. “After years of Sri Lanka being on the outs with them, it wants to resurrect the positive ties of the past.”

Last year, the US had pushed for the publication of the UN report by March 2015. But no sooner had Rajapaksa gone than Washington prevailed on the UN to hold off on publication for another six months, to give the new administration some room to manoeuvre.

While the Hindu Tamil minority prefers an international probe, the Buddhist Sinhalese majority sees it as a breach of sovereignty, making any suggestion of an international role in the war crimes probe a hot-button political issue.

In more efforts to woo Sri Lanka, US Secretary of State John Kerry visited the country in May. Then, within a week of August’s parliamentary elections reinstating the unity government, US Assistant Secretary of State for South and Central Asia Nisha Biswal flew to Colombo, and, in a surprising U-turn, announced Washington would support a domestic investigation.

Finally, the UN in late September adopted a watered-down US-sponsored resolution for a domestic probe. Dropping its earlier insistence on a “hybrid” war crimes investigation involving foreign judges and prosecutors, the resolution mentioned foreign participation but did not make it mandatory.

“From demanding an intrusive external probe to settling for an internal one with an undefined international role, America’s climbdown has been significant,” said political analyst Kusal Perera. “The question is, why is it doing it and what is it extracting in return?”

Despite the wording of the resolution, as a co-sponsor of the resolution, Sri Lanka is expected to accommodate some degree of foreign expertise to make the process credible. But with most political parties opposed to this, finding a mechanism acceptable at home and abroad could take time.

But time is not on the government’s side. An oral review of the probe process is due at the UN next June and a report will follow in March 2017, keeping the government on its toes - and giving the West even greater pull.

Jayatilleka, however, believes the Western leverage is temporary. “China has certainly suffered a defeat at the hands of the West, or more correctly, the Indo-US axis, but that could prove short-lived for two reasons,” he said.

“The first is economic reality and the second is that much of the Sri Lankan public as well as one of the island’s two biggest political formations in the unity government, [President Maithripala Sirisena’s] Sri Lanka Freedom Party, sees China as Sri Lanka’s most trustworthy friend.”

(This article appeared in the South China Morning Post print edition as ‘US gains as China fades in war debate’.)