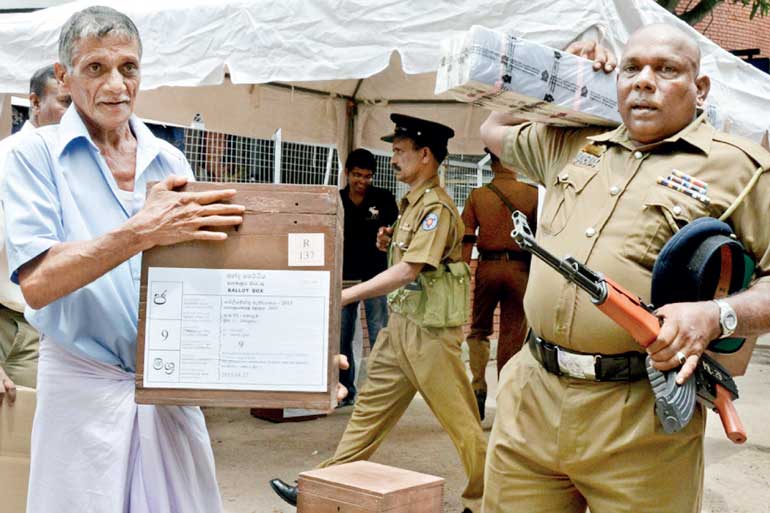 distribution to a voting centre – Pic by Upul Abayasekara

Sri Lankans will vote to elect legislators to sit in the country’s 15th Parliament today, in a poll that has become a rematch between former President Mahinda Rajapaksa and the coalition that defeated him in the January presidential contest.

Over 15 million voters are registered to vote at 12,314 polling stations around the island in today’s Parliamentary election to choose the new 225-member Legislature.

The Elections Department began the distribution of ballot boxes to polling stations islandwide at 7 a.m. yesterday, and the task was completed by mid-afternoon, election officials said.

The department will deploy 125,000 officials for election duty today, with 70,000 officials ear-marked for vote-counting once polling concludes this evening.

Polls Chief Mahinda Deshapriya said he expects the first results of the 2015 Parliamentary election to be released by midnight tomorrow. The results release is not likely to extend till 19 August, he said.

Officials and analysts expect today’s voter turnout to be lower than in January’s presidential poll, since the two major national elections have happened only months apart, a trend observed in previous elections.

A drop in turnout is most likely to adversely impact the UPFA led by Rajapaksa, analysts say, with the party’s internal crisis reaching crescendo two days ahead of election day likely to discourage its base supporters and activists.

Political parties are urging people to go out and vote.

“Former President Mahinda Rajapaksa urges all registered voters to think about the country, the nation and the future and cast their ballots in tomorrow’s election,” Rajapaksa spokesman Rohan Welivita said in a press release issued yesterday. Welivita said the former President also appealed to all Sri Lankans to remain peaceful on election day and in the post election period.

The Campaign for Free and Fair Elections (CaFFE) said it had received 1,802 complaints during the pre-election but the bulk of them were minor complaints. The polls monitor also hailed the considerable decreased in the abuse of State property, that it said had been inherent to Sri Lankan elections.

“In the last elections during the Government of Mahinda Rajapaksa such abuses were widespread often with the blessings of the most senior politicians. However during this election Sirisena and Wickremesinghe have not misused public property and have led the fight against the misuse of public property,” the monitors said.

The observers said the election was likely to be the tightest race since the parliamentary polls in 2001. The Janatha Vimukthi Peramuna led by Anura Kumara Dissanayake is projected to perform well in today’s election, potentially obtaining between 10-15 seats.

The defining highlight of the 17 August polls campaign has been the re-entry of President Rajapaksa who is hoping to make a political comeback as prime minister if his party secures the most seats in the House.

Rajapaksa has pushed back hard against the coalition Government of Prime Minister Wickremesinghe and President Maithripala Sirisena, claiming they had been soft on terror threats and stalled the country’s major development drive initiated during his presidential tenure.

However Rajapaksa’s re-entry galvanised opposition forces that had mobilised against his rule in January, pushing a fragmented coalition back together to contest the Parliamentary poll under a single banner. The UNFGG has campaigned on a good governance platform, urging voters to prevent Rajapaksa from rolling-back the 8 January victory for democracy, freedom and the rule of law.

Prime Minister Ranil Wickremesinghe who is facing off against Rajapaksa as his de facto prime ministerial rival for the first time in a decade, told The Hindu newspaper yesterday that today’s election was crucial, like the 1977 poll.

“There is a definite trend against former President Mahinda Rajapaksa and the type of autocratic government they had. People are for open, good governance, transparency. They also like to see rapid economic progress,” Wickremesinghe said.

Analysts are predicting that no party will win an outright majority in the election, but most forecasts expect the UNFGG to secure between 95-105 seats, making the coalition the single largest party in Parliament.