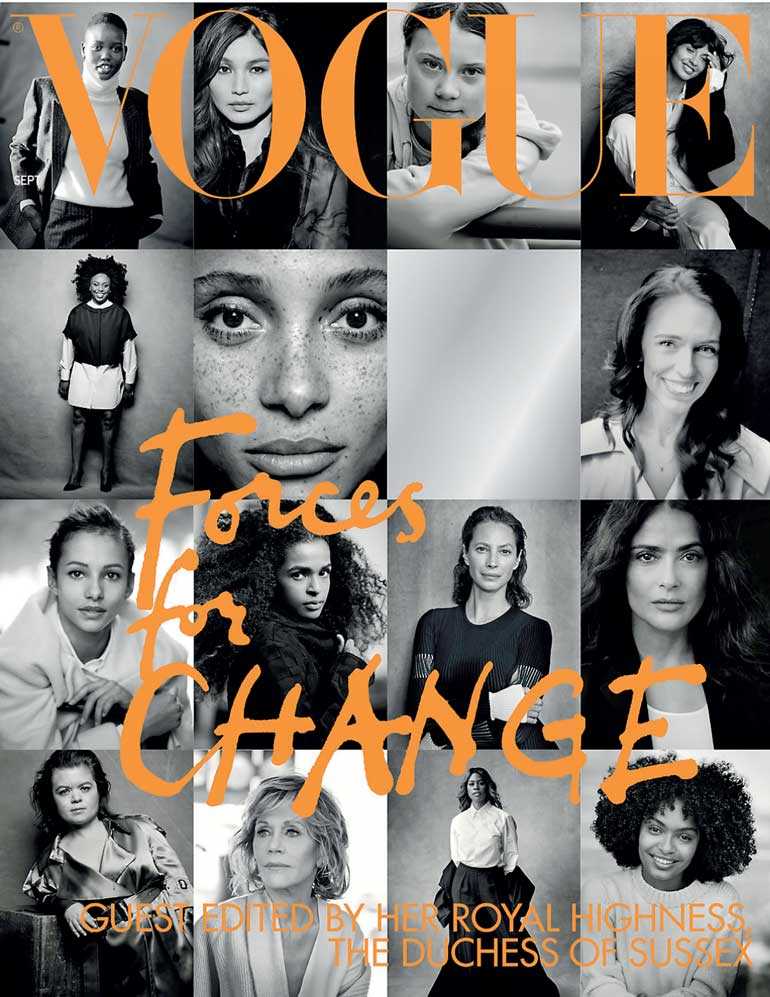 The cover of British Vogue’s September issue, entitled “Forces for Change”, which is guest-edited by Meghan, Duchess of Sussex, in this undated handout image released on July 28, 2019 - PA Wire/Handout via Reuters

LONDON (Reuters): Meghan, wife of Britain’s Prince Harry, has chosen to feature 15 women she considers “Forces for Change” on the cover of the September issue of British Vogue that she guest edited, Buckingham Palace said on Sunday.

The Duchess of Sussex, who gave birth to her first child in May, spent seven months working with British Vogue’s Editor-in-Chief Edward Enninful on the issue.

The former actress, 37, said in a statement she had sought to steer the focus of the September issue - usually the year’s most read - to “the values, causes and people making impact in the world today”.

The cover of the magazine, which will be available on 2 August, features names like teenage climate change campaigner Greta Thunberg, New Zealand’s Prime Minister Jacinda Arden, boxer Ramla Ali and actress and women’s rights advocate Salma Hayek Pinault. Author Chimamanda Ngozi Adichie, Royal Ballet principal dancer Francesca Hayward, and model and former refugee Adut Akech are among others featured in a list that also includes mental health and diversity campaigners. “Through this lens I hope you’ll feel the strength of the collective in the diverse selection of women chosen for the cover as well as the team of support I called upon within the issue to help bring this to light,” Meghan said in the statement.

“I hope readers feel as inspired as I do, by the ‘Forces for Change’ they’ll find within these pages.”

The issue also features a “candid conversation” between Meghan and former US First Lady Michelle Obama, and an interview with veteran primatologist Jane Goodall.