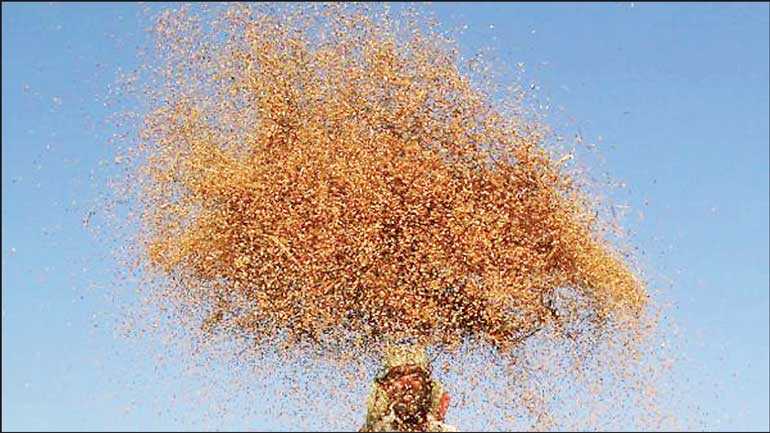 FILE PHOTO: A farmer winnows paddy crops at a field on the outskirts of Agartala, India, November 12, 2015. REUTERS

The Food and Agriculture Organization (FAO) food price index, which measures monthly changes for a basket of cereals, oilseeds, dairy products, meat and sugar hit a 26-month high in November, averaging 177.2 points, up 2.7% on the previous month and up 9.5% year-on-year. FAO also predicted that cereal production would reach an all-time high of 2.714 billion tons in 2019, up 0.4% from its last forecast.

The vegetable oil price index rose 10.4% to 150.6 points, reaching its highest point since May 2018, led by firmer palm oil prices, which strengthened on robust import demand, increased biodiesel use and concerns over possible supply shortages. The meat price index registered its largest month-on-month increase since May 2009, rising 4.6% from October to 190.5 points, with beef and sheep meat rising most strongly, lifted by demand from China and year-end holiday demand.

The sugar price index averaged 181.6 points, up 1.8% from October, led by expectations of higher demand.

The FAO Dairy Price Index averaged 192.6 points, only marginally up from October, after two months of declines.

Global rice production was seen at 515 million tons, up 1.6 million tons from the previous forecast, implying a 0.5% fall from the 2018 all-time high, the agency said.