India committed to ‘Security and Growth for All in the Region’

It gives me great pleasure to be here for the second Indian Ocean Conference. I was unable to attend the first conference last year, and was therefore looking forward to be amidst you today. 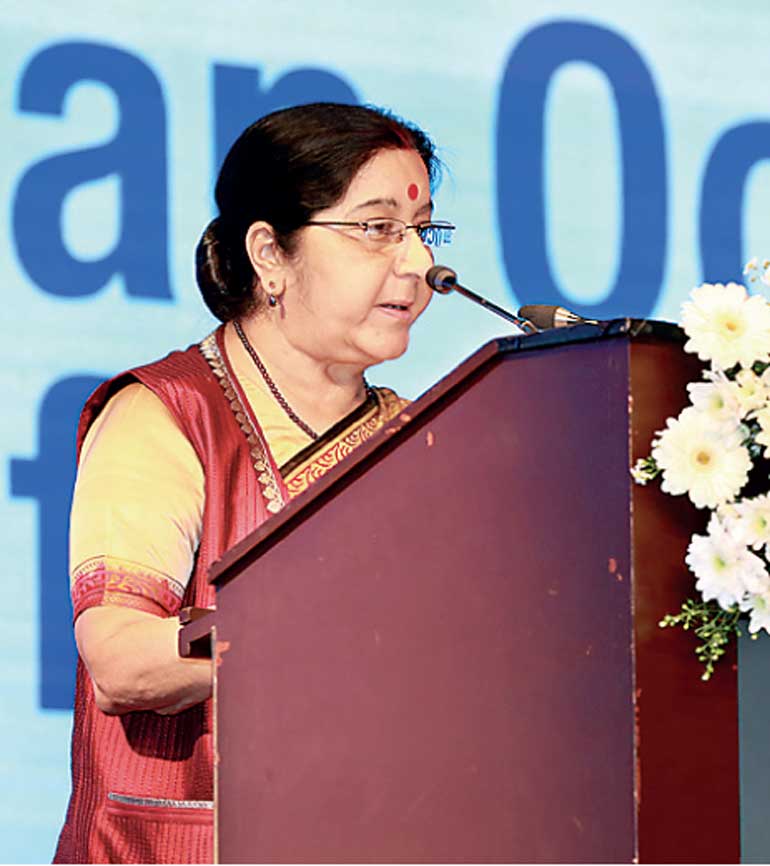 Let me begin by thanking India Foundation for organising the Conference. I also take this opportunity to thank the Government of Sri Lanka for hosting the Conference and extending all support.

India is, and has always been, a maritime nation. It is home to some of the oldest seaports in the world and historically has had extensive maritime links with Africa, Gulf, Mediterranean, South East Asia and the Far East. The waters of the Indian Ocean have not only carried commerce but have borne India’s culture, religion, and ideas far and wide. India’s location at the very centre of the Indian Ocean has linked us with other cultures, shaped our maritime trade routes, and influenced our strategic thought.

‘Security and Growth for All in the Region’

Today, the Indian Ocean is the one of busiest and most critical maritime transportation links in the world. Almost 100,000 ships a year pass through these waters, carrying about half of the world’s container shipments, one-third of the world’s bulk cargo traffic and two-thirds of the oil shipments. The fact that three quarters of this traffic is headed for destinations beyond the region underlines the fact that the Indian Ocean is of vital importance well beyond the shores of the littoral states.

The economies of many of the littoral countries depend heavily on the ports, the shipping, and most importantly, the vast natural resources that enrich these waters with an abundance of marine life. For India, of course, the Indian Ocean is of vital importance – we have an extensive coastline of 7500 km and several 100 islands between Lakshadweep in the west and the Andaman and Nicobar islands in the east. Our southernmost tip is just 90 nautical miles from Indonesia. Our Exclusive Economic Zone is 2.4 million square kilometres and 90% of our trade by volume and almost all of our oil imports come through the sea. Clearly, it is but natural that India’s role as the key pivot in the Indian Ocean region is a given, not only geographically but by virtue of a shared historical and cultural heritage that binds us all across these waters.

Our vision for the Indian Ocean Region, therefore, is to preserve its organic unity while advancing cooperation. We will use our capabilities for the collective wellbeing, and the mutual benefit of our maritime neighbours and island states in building their capabilities. As we envisage the Indian Ocean as an engine for growth and prosperity in our region and beyond, it is of utmost importance that these waters remain safe and secure. We consider it an imperative that those who live in this region bear the primary responsibility for the peace, stability and prosperity of the Indian Ocean.

This vision was enunciated by Prime Minister Modi in March 2015 when he put forward the concept of SAGAR – ‘Security and Growth for All in the Region’. This is a clear, high-level articulation of India’s vision for the Indian Ocean. SAGAR has distinct but inter-related elements and underscore India’s engagement in the Indian Ocean.

These are enhancing capacities to safeguard land and maritime territories and interests; deepening economic and security cooperation in the littoral; promoting collective action to deal with natural disasters and maritime threats like piracy, terrorism and emergent non-state actors; working towards sustainable regional development through enhanced collaboration; and, engaging with countries beyond our shores with the aim of building greater trust and promoting respect for maritime rules, norms and peaceful resolution of disputes.

The principles enshrined in SAGAR provide us with a coherent framework to address some of the challenges relating to economic revival, connectivity, security, culture and identity, and India’s own evolving approach to these issues. The challenge before us is to ensure intra-ocean trade and investment, and the sustainable harnessing of the wealth of the seas, including food, medicines and clean energy.

A related aspect is the emergence of the Blue Economy as a promising new pillar of prosperity in the region, with immense economic and employment potential. We are already engaging our neighbours in Blue Economy initiatives, particularly in the areas of marine bio-technology, exploration and sustainable exploitation of ocean mineral resources, sustainable fishing practices, and harnessing of ocean energy.

In India, we are implementing targeted programmes for re-energising economic activity in our islands and our coastal areas. There is also a renewed focus on strengthening marine research, developing eco-friendly marine industrial technologies, promoting sustainable fisheries and, ensuring the protection of the maritime environment.

We remain committed to extending port connectivity among the littoral states of the Indian Ocean and beyond. This is the objective behind the Sagarmala initiative, which aims to establish new ports and modernise old ones.

It is only natural, therefore, that connectivity is one of the major themes of Prime Minister Modi’s ‘Neighbourhood First’ policy. We continue to work on a range of projects to improve maritime logistics in Sri Lanka, Maldives, Mauritius and Seychelles. Our other initiatives include the Kaladan transport project leading to Sittwe port in Myanmar; the Trilateral Highway to Thailand; and, the Chabahar port project in Iran.

But most of all, for the Indian Ocean economic revival to be sustainable, the waters must not only be better connected but they should remain free from non-traditional and traditional threats that could impede the seamless movement of goods, people and ideas. Security is fundamental to the ‘SAGAR’ vision. If the revitalised maritime economy of the Indian Ocean region is to be a force for global economic growth in the coming years, it is essential that the waters remain peaceful, stable and secure. It is imperative too, that all stake holders abide by a rules-based global order.

The Indian Ocean is prone to non-traditional security threats like piracy, smuggling, maritime terrorism, illegal fishing, and trafficking of humans and narcotics. We realise that to effectively combat transnational security challenges across the Indian Ocean, including those posed by non-state actors, it is important to develop a security architecture that strengthens the culture of cooperation and collective action.

The success of maritime cooperative action against piracy in the Gulf of Aden is an example of the benefits of a cooperative approach which resulted in a dramatic decline in piracy incidents in the region.

India is prepared to bear its share of responsibility in this regard. Our response to security challenges in the Indian Ocean will be based on our national capabilities, complemented by participation in relevant regional platforms.

We are founding member of the Contact Group on Piracy and have actively participated in anti-piracy patrols in the Gulf of Aden and off the Horn of Africa; and, undertaken joint EEZ patrols off the waters of Maldives, Seychelles, and Mauritius.

An effective response mechanism to address humanitarian crises and natural disasters is perhaps the most visible element of the evolving Indian Ocean security strategy. In recent years, India has promptly responded to humanitarian crisis, whether man-made or natural, in its neighbourhood. Humanitarian assistance and disaster relief (HADR) form an important part of our outreach efforts.

Indian ships were involved in the safe evacuation of over 2,000 Indian expatriates and over 1,300 foreign nationals from Yemen in April 2015. We carried out rescue missions in Libya, Lebanon and Somalia. India has been the “first responder” to calls of assistance – providing relief supplies and medical assistance to flood ravaged peoples of Sri Lanka in June 2017 or to rescuing Bangladeshis swept off the coast due to cyclone Mora or to alleviating the acute drinking water crisis in Maldives in 2014 when we airlifted 1,000 tons of fresh water to Male. India also despatched cyclone relief materials to Fiji in February 2016.

Over the next couple of days, this forum will provide an opportunity to deepen our understanding of the economic and strategic importance of the Indian Ocean. I am sure my friends on the dais will agree that an understanding of the myriad synergies that bring this region together and connect it to the world beyond is not just an academic exercise, but an imperative if we are to succeed in evolving a meaningful cooperative strategy for ensuring peace, progress and prosperity in this region.

This underlies India’s own approach to its maritime neighbourhood – we see the Indian Ocean as not just a water body, but a global stage for continued economic, social, and cultural dialogue.