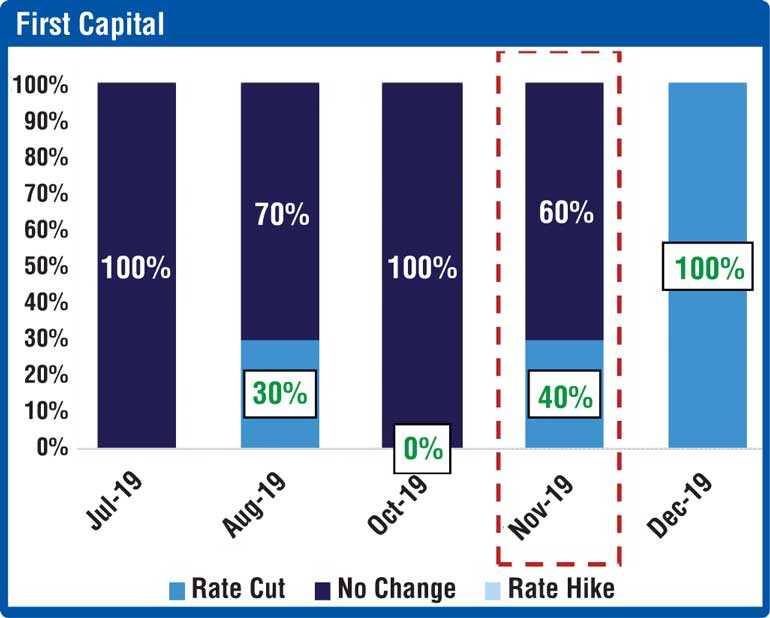 First Capital Research yesterday decided not to rule out a rate cut by the Central Bank when it announces its latest monetary policy report on Friday, as space for further easing exists due to the surprise rate cut by the Federal Reserve and dire need to boost economic growth.

The Central Bank maintained its policy rates at the last Monetary Board meeting as they believed that private sector credit may pick up gradually and also there is ample space for market lending rates to adjust downwards in response to the policy measures taken to address the subpar economic growth which was affected by Easter Sunday attacks.

“Despite the 50 bps rate cuts each in May and August, First Capital Research believes that door is open for a rate cut considering the need to address the sluggishness in economic activity. The external outlook favouring SL, easing political uncertainty and positive macro environment provides opportunity for monetary easing despite the risk in lower liquidity position.

“Accordingly, we do not rule out a possibility of a rate cut though at a lower probability of 40%. We are more biased towards a rate cut in December considering the risk in lower liquidity position,” it said in a statement.

The Federal Reserve, which acts as the US Central Bank, in late October cut benchmark overnight lending rate a quarter point to a range of 1.50%-1.75%, the third such move in 2019 while most of the committee members saw the moves as enough to support the outlook of moderate growth.

Strengthening macroeconomic indicators and the current high yields has been slowly attracting foreign inflows which is likely to further accelerate post-Presidential Election amidst easing political uncertainty to a certain extent.

With the support of foreign inflows, currency has been strengthening over the past couple of weeks. “We believe a significantly undervalued rupee (as indicated by the REER) and lower credit growth provides room for Central Bank to buy dollars, strengthening the reserves and increasing liquidity in the system.”

Sri Lanka’s external position looks comfortable near-term, with foreign reserves at $ 7.8 billion as at October and the improved current account position. The Central Bank plans to raise a Samurai bond of $ 500 million in December, further adding cushion to the foreign reserves.

“We expect reserves to hover comfortably around $ 8 billion mark with sufficient foreign repayment cover during the rest of 2019. Accordingly, we expect the comfortable position in the external sector to exert lower pressure on reserves.”

Despite the Central Bank cutting rates in August for the second time, the decline in interest rates has been slow amidst the high level of Non-Performing Loans (NPLs) in the system forcing Central Bank to introduce lending caps to banks. Post completion of the Presidential Election business activity and credit growth has shown slow progress but continues to remain below expectations calling for further monetary easing.