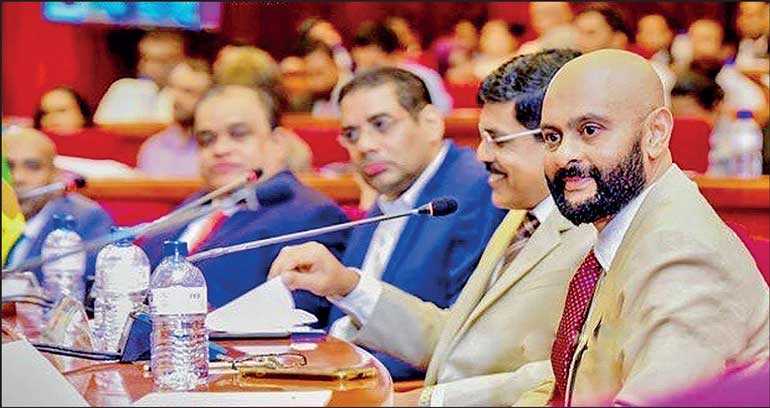 Dhammika Perera speaking at the International Tourism Leaders Summit at the BMICH on Saturday said majority of the labour entering the market did so without any training and Perera argued that it was essential to give skills to people to increase productivity and pull them out of poverty.

He pointed out that the main reason Sri Lanka has got caught up in the middle income trap (the middle-income trap is the situation in which a country’s growth slows after reaching middle income levels) is because it is not investing sufficiently in early childhood development and skilling its workforce properly. If this segment is helped with loans or given other support they will get the skills that they want. This has been a critical element of other countries that have broken out of the middle income trap.

Perera also noted the current poverty alleviation programs were poorly resourced because they provided too few funds to make a genuine impact on the lives of recipients and they were not properly targeted. The other point that was expressed was the need for the bureaucracy to be more hospitable to private sector investments and the need for consistent policies across all sectors.

While those countries like Poland and Taiwan that moved through the middle income trap, their economic growth was inclusive, jobs and salaries increased, inequality across income groups and provinces reduced, education levels increased and poverty declined drastically.

For a start it is important to get the public institutions right—economic but also political—and guide reform with a shared vision. Also countries like Poland sustained its high growth with a performing democracy—one that supported a socially responsible market economy. Such a vision facilitated remarkable policy continuity spanning 18 governments since democratisation. Therefore the creation and strengthening the structures of the basic democratic institutions at the local and national levels is critical.

We need Foreign Direct Investment to enable our domestic firms to participate in international value chains and exposed them to the international markets, which will provide access to better inputs, capital goods, and technological transfers, good reforms and solid investments in human capital, which can result in large gains in educational attainment and ensure broad-based access to quality education across all income groups and regions to pull people out of the poverty trap.

Creating competitive and open markets is required to provide business opportunities for firms and jobs to increase business growth and also earnings. Their prosperity will generate demand for goods and services. Opening up to global capital intelligently will give the economy a massive boost. The country needs to shift resources from low to high productivity sectors for exports to make the transformation.

The Sri Lankan economy needs to rise as a whole, not in parts only. Achieving and sustaining growth requires the mass mobilisation of financial as well as human capital. If not, large sections of the population will not see their lives improve and will be left behind. Therefore the quality of healthcare, education and skill development for the deprived masses is a must. In the interim, policymakers must not use the trap story as an excuse for poor short -term economic growth.

The country should do all it can for a much needed upsurge in economic activity. Failure at this stage could leave Sri Lanka stagnant in a lower middle-income bracket, even as Asia strives to catch up with the West and overtake them. If this is to be an “Asian century,” Sri Lanka must stay in the reckoning for the sake of the next few generations.

(The writer is a thought leader.)